It was an eventful week in the currency markets last week, with focus on an ever weakening USD, which is all the more eye-catching given the fundamental backdrop at the present time. Key in that is 'present time', as markets - certainly in FX - tend to get ahead of the curve, but in this case, a little too aggressively for comfort.  In our view, some of the reasoning behind the past week's dramatic demise has been somewhat overstated in the comments from US Treasury Sec Mnuchin's comments on the USD, which some how manifested itself into an endorsement of a softer USD policy! We did not see it that way, but the story fit the move and the meme spread like wildfire.

The truth is that the USD has been weakening since the middle of Dec 2017, and momentum truly gathered pace when earlier this year, reports that China were considering trimming their Treasury buying, or perhaps halting it altogether.  In a round-about way, this was denied, but it certainly raised concerns over the impact this would have on the US economy, especially when the twin deficit is back under scrutiny as it periodically is over time.

At this point, some will argue over the net impact of the tax reforms at current levels of debt, and indeed the timing, and this was exacerbated by the recent shut down of the government as Congress failed to reach an agreement initially. Despite the eventual stop gap bill being passed, we are back to square one on 8 Feb.  This will likely to keep USD sentiment on the defensive, but we expect to see some moderation in the rampant flow seen in recent weeks, which was also set off by technical factors; namely the breach of the USD index of 91.0, last year's base.  Listening to a number of asset/fund managers a few week's back, this was seen to be a line in the sand and the rest has been history.  Since then, the USD has fallen into the mid 88.00's (DXY), with the leading pairs all reaching some key levels, some of which were 2018 targets - now achieved in the first month of the year. 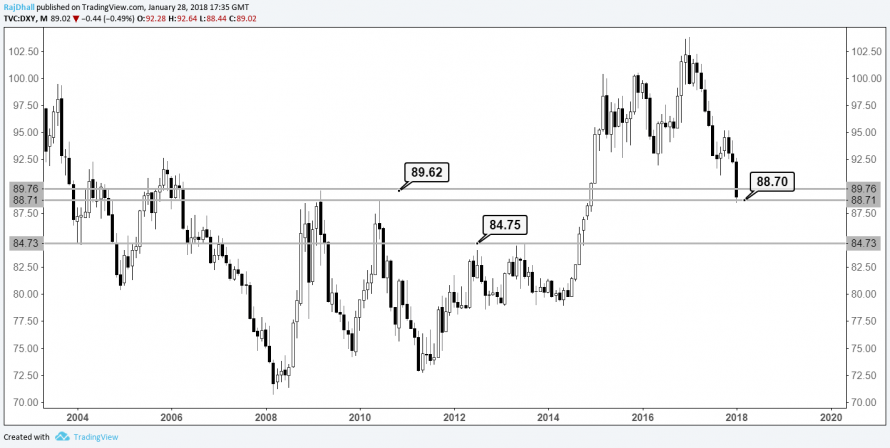 Looking at what may turn the USD around, as we are clearly at oversold levels across the board, we look to the Core PCE data out on Monday and then the US payrolls report on Friday for some upside traction in wages and inflation.  This should start to see the market moving closer in line with the Fed dot plot, though curve flattening has also raised fears on longevity of the current level of the US economic cycle, with Europe and Japan looking at a sharper trajectory but for levels of inflation that we are currently faced with.

The Fed also meets this week, but we only have the rate announcement which will remain unchanged until March at the earliest, while the statement is unlikely to see much change, especially with some of the 'average' date readings of late.  Q4 GDP saw the first reading showing a healthy rise of 2.6%, and thankfully, despite falling short of expectations (3.0%), the market did not react as expected to any significant degree with durable goods orders, but also with strong consumer spending and a higher GDP price index which should feed into the inflation figures.  USD weakness will naturally feed into this also.

EUR/USD has now reached 1.2500 as a result of the USD rout, and the ECB meeting and press conference last week were perhaps a little more restrained on the exchange rate (or more specifically the rate of appreciation) than some were hoping for, though in their own way they reflective this in their concerns over external factors and shocks to economic growth, of which excessive EUR strength is.  Inflation may not be to heavily impacted given strong gains in commodity prices, but in obsessing over reaching the 2.0% target, they are setting a rod for their own back, and this may delay any signal of an end to QE, even though we all know it is coming.  The ECB will expect to see US rates rising within this period, and this will hopefully take the sting out of the EUR, which has been moderating elsewhere, notably against GBP, but aggressively last week against the CHF and then late on Friday against the JPY also. 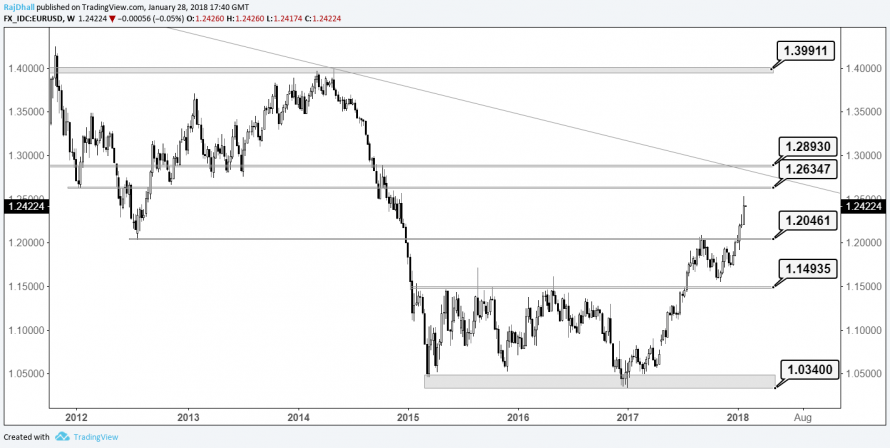 Normalisation in Japan has finally dawned on the (mass) market but is something we have been warning of over a number of weeks, and this looks like developing into the latest theme which may pick up in momentum.   We may have to look to the crosses for greater opportunities going forward, as the short term metrics suggest USD/JPY is stretched a little in the near term.  This is not to preclude a further extension to the downside which may dip under the lows from last September (107.30 or so), with 106.90-30 a potential zone were we may see covering ensue along with expected comments from the BoJ on monitoring FX moves.  We can discount any intervention unless the pace of JPY gains dictate, but up until now, the spot rate has been relatively measured in its path lower. 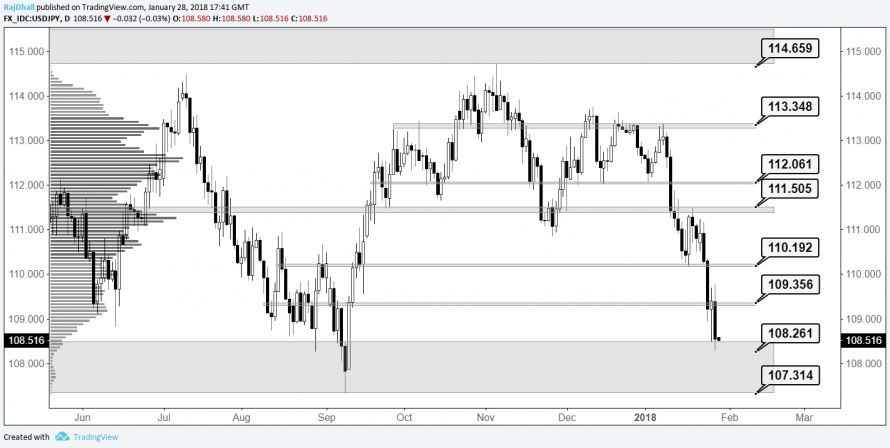 EUR/JPY saw a sharp turn lower on Friday which took out support around the 13500 mark, but only a breach of 132.50 would signal a potential top in place despite continued expectations of a EUR/USD towards 1.3000.  However, it won't be long before the market starts thinking about covering the risk over the Italian elections which are set for 04 March, and this may be a source of hindrance to the upside, with complacency taking over given the myopic view on all USD based pairs.

Adding to near term risks on the EUR, we have the inflation data for Jan next week, which is expected to show the preliminary reading at 1.3% from 1.4%, but if the core picks up a little (1.0% from 0.9% forecast), then this may be overlooked.  Earlier in the week we get Q4 GDP which is expected to tick up from 2.6% to 2.7%, and would underpin any major sell off in the immediate future. Robust growth is widely acknowledged however and is more than priced in at this stage, so manufacturing PMIs (due later in the week) will be monitored for economic endurance from here on out.

In Japan, we saw inflation last week moving in the right direction, reaching 1.0%, but all the while watching the various batches of second tier data which again offers some reassurance that this will continue all with the ultra accommodative BoJ policy in place. Household spending, industrial production, construction orders and housing starts are all Dec readings, while manufacturing PMIs at the end of the week cover Jan (currently in healthy expansionary mode at 54.4).

In the UK, domestic data has been coming in better than expected, but in Friday's GDP for Q4, we may have seen a 0.5% print drawing praise from Chancellor Hammond, but at an annualised rate of 1.5%, we hardly feel this is cause for joy, with the ONS suggesting the data masks growing concerns in the underlying performance ahead, notably in consumer spending which is one area of weakness we are anticipating in the year ahead - and already showing in the Dec retail sales figures. Nevertheless, we keep hearing that this is the year a Brexit deal is set to fall in place, and while we agree the wholesale panic which sent the traded weighted GBP index to sub 74.00 and Cable to sub 1.2000 levels was overdone, the pace of the recovery is a little premature to say the least, and EUR/GBP resilience into 0.8700 was highlighted late last week despite the GDP up-print.

We need to hear of more positive developments in the Brexit negotiations to believe in this GBP rally, but in moves similar to that of the Oil price in mid 2016, investors and longer term traders took to believing in an eventual return to value, but this was from the 1.2500-1.3000 area.  We see little value in evaluating levels in Cable relative to those seen into the referendum vote due to USD distortions, but EUR/GBP offers a better perspective as we were trading just under 0.7600 ahead of the result, where polls were suggesting we were set to vote to remain in the EU.  The top was extended to the early 0.9200's in Oct 2016 and just over 0.9300+ in Aug last year, so current levels reflect more tempered gains in the Pound.  The trade weighted index is now just above the 78.0 level in the meantime, vs a post Brexit high shy of 80.0, so this may prove more a signal to moderate gains near term, but under the current themes, more so against the EUR until the USD finds a base.  Little on the data schedule other than manufacturing and construction PMIs towards the end of the week. 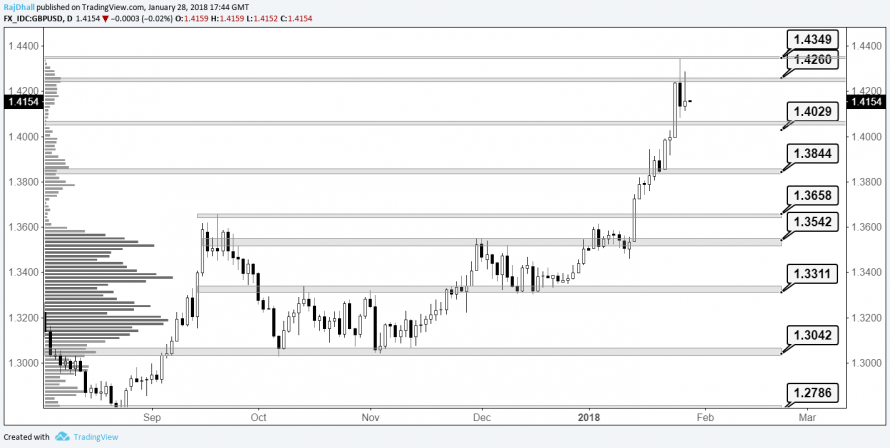 Canada is also in the midst of a renegotiation of trading terms, with the NAFTA accord holding up CAD out-performance given the BoC has started to raise rates.  Were it not for this uncertainty, we would have expected USD/CAD to have dropped under 1.2000 by now, but as long as there is little material progress in the talks, 1.2100-1.2200 will limit the downside for now. On Monday we will see how the sixth round of negotiations have fared, and sources claimed there was a little more compromise from Canada, but there is an abundance of here-say these days.  Nov GDP midweek offers the main data risk to contend with here. 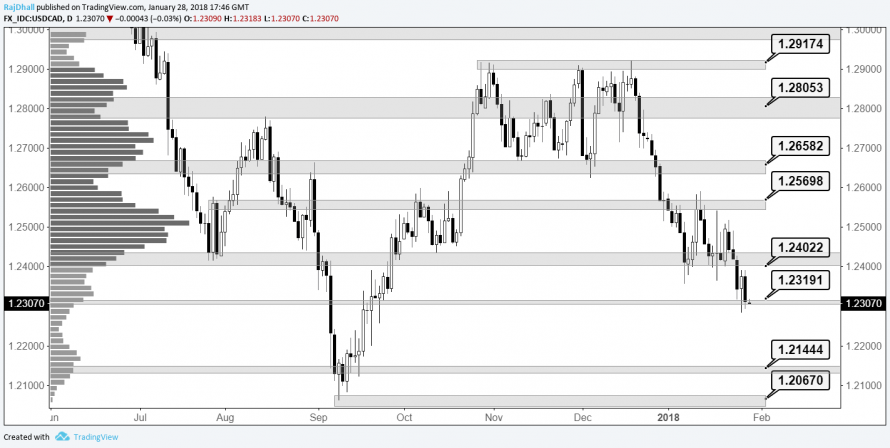 In Australia, the market looks to the Q4 inflation data for fresh direction on the AUD, but we sense there may be a little disappointment if the reaction to the equivalent NZ stats were anything to go by.  We saw the latter reading drop from 1.9% to 1.6%, but by the end of the week, the impact on the spot rate was net unchanged.  AUD/NZD was and remain higher though, pushing above the 1.1000 mark, so if Australia's CPI number returns to 2.0% (from 1.8%), then we could see a further push higher in the cross rate. Industrial metals prices have been showing some exhaustion on the upside however, so along with the technical resistance into the mid 0.8100's, we should at the very least see some momentum fading in AUD/USD, which would mean NZD/USD follows in kind.  In both cases, both the RBA and RBNZ will have something to say if we extend higher against the USD, so limited scope for differentiation away from the USD in the current climate. 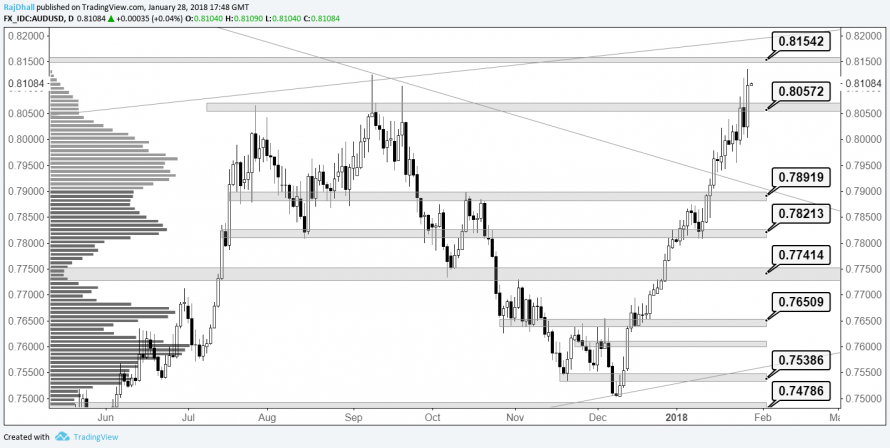