Submitted by Shant Movsesian and Rajan Dhall of fxdailyterminal.com

It has been Groundhog Day in the currency markets lately, the only real judgement to make that of when to start selling USDs again.

While it is hard to argue against factors such as the lack of confidence, and growing concerns over US debt and the efficacy of policy reforms, the incessant nature of what is now an over-played theme is wearing even thinner.  There is also a large element of repositioning for differing stages in the tightening cycles currently under way globally, but we are at a stage where exchange rates are now over-compensating for this and we will continue to wait the correction.

When looking at EUR/USD, it is easy to suggest the EUR is overbought, but on the crosses, it is not that prominent, so rather than look for a broad-based recovery in the greenback, we will, and are already starting to see some differentiation.  Where the EUR has particularly underwhelmed is in EUR/GBP, where we have survived another test below 0.8700, trying to maintain a foothold above 0.8800 again in order to put in a challenge on the stronger resistance into the low 0.8900's. 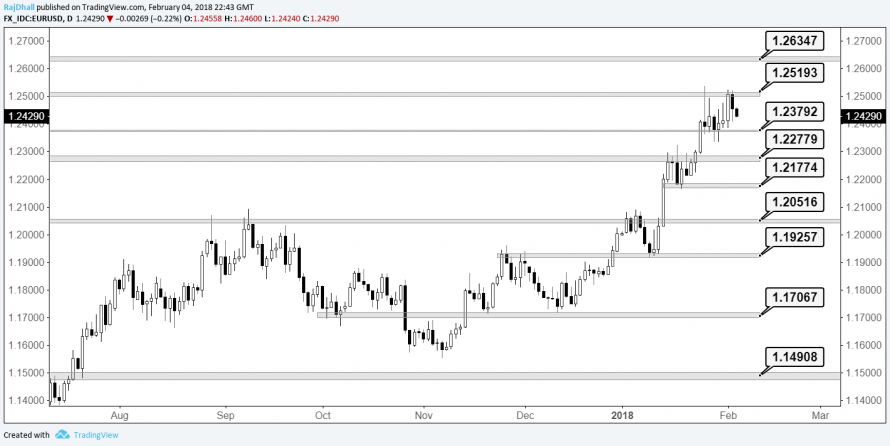 This leads us to one of the main events next week: the BoE meeting, which is accompanied by the Quarterly Inflation Report.  Since the 2016 rate cut was reversed last year, the market has been leaning towards further tightening in the 2-3 horizon, as the economic data has been holding up, but in truth, is only seen positive against some of the dire predictions and forecasts in the immediate aftermath of the vote to exit the EU.  Just over a week ago, Chancellor Hammond seemed happy with Q4 growth at 1.5% (a touch above consensus, which is truly astonishing under the circumstances, but we expect governor Carney and the rest of the MPC to take a more sanguine view.  Carney continues to highlight the under-performance he expects to see in the UK economy for 2018 and likely 2019, but relative pricing seems a thing of the past as the market lurches from one theme to another unreservedly and without much regard for the bigger picture.  There are concerns that some in the BoE will sound a touch more hawkish on rates despite the slack in the economy, and skew their thinking towards another rate hike this year rather than a more flexible 2 over the forecast horizon - this is restricting the pullbacks in GBP, which continues to find support either side of 1.4000 against the USD.

On Monday, we get the final - services - component in the PMIs, with both manufacturing and construction slipping, that latter now hovering over the contractionary 50.0 pivot.  On Brexit, there is clearly no sign that the EU will allow free trade in the single marker for UK financial services, so once again, we question where this sudden bout of optimism expressed through GBP has come from.  Some redress yes, but through 1.4000 in Cable and sub 0.8700 in GBP goes beyond that and is extremely premature to say the least.  Nevertheless, the chorus from asset managers on this has been from the same hymn sheet, so we can easily see a dash for the exits once this positive anticipation wears off. 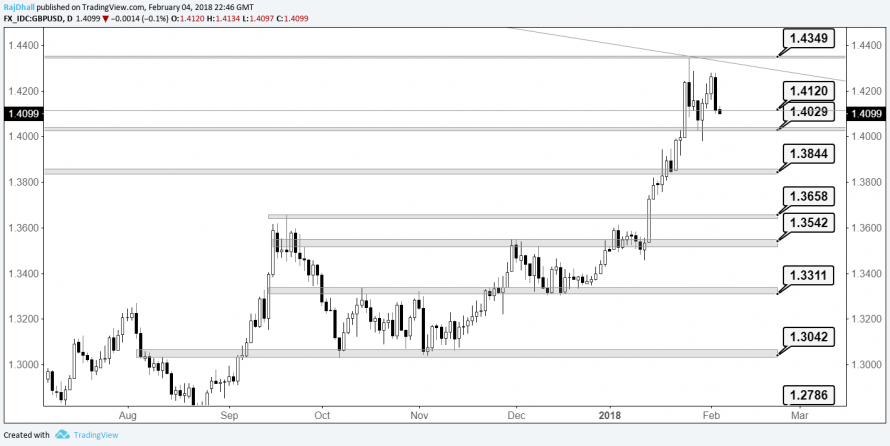 We also have the RBA meeting in the week ahead, but currency worries will have been allayed by the AUD/USD move back under 0.8000.  There is little scope for change in rates or the current rhetoric, with only modest swings in the data keeping expectations of a move on rates this year alive.

As we have already noted, there are signs that it is not all USD related moving forward, and we look to have put a near term top in place in the mid 0.8100's with event risk likely to keep is in and around the 0.7900 level until then.  Commodity prices took a hit at the end of last week in the aftermath of the US payrolls report - which will cover shortly - so the obvious place to express the broader positive USD impact was against the AUD.  What has been odd however is the perseverance of the NZD in light of some of the negative drivers on AUD, of which one was the inflation reading which missed expectations at 1.9% vs 2.0% consensus.  A week before this, we saw NZ inflation dropping from 1.9% to 1.6% so we concur with the view that economic data counts for little in the current market mindset, but recent calls for NZD strength off the back of strong equity markets will now be tested after Friday's rout on Wall Street.  The RBNZ also meet, but we do not expect them to shift their bias away from the next rate hike coming in in H1 2019 at the earliest. 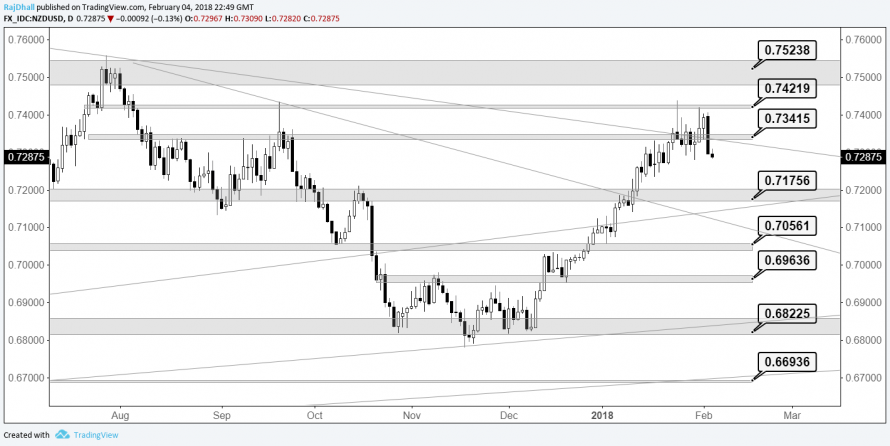 Following on, Friday's US jobs report in the US produced all the ingredients the Fed will have been waiting on.  Sustained headline growth, a pick up in wages and and an unemployment rate heading for sub 4.0%.  Treasuries sold off to lift the yields higher across the curve, with the benchmark 10yr Note now through 2.80% and now set to test 3.0% with US inflation only going one way with the USD as depressed as it is.  Spreads are seeing limited movement however, and as we have already covered the UK, Gilts in the 10yr are now close to 1.60%, which keeps this spread in the 115-125bp range.

USD/JPY though has reacted, pushing through the 110.00 level, but this is not the chart to focus on - rather than CHF/JPY, which shows where the flow of money is going, and accentuated by losses in US equities.  We saw the S&P 500 shedding close to 60pts and the Dow printing an ominous -666, but many had anticipated this had US Treasury yields pushed up to current levels as they have.  As such, the SNB may have a job on their hands if sentiment remains the way it is, though sceptics will be waiting for dip buyers - let's see.  USD/CHF looks to be the focus of central bank attention, and as governor Jordan is never shy to admit, they will intervene if they see fit.  Relentless one way moves are never comfortable for any central bank to stomach, but take the liquidity out of the market and this is what you get! 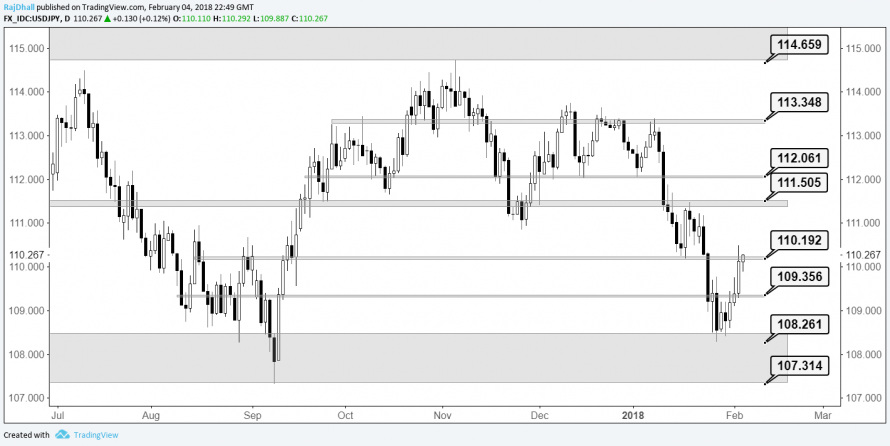 Canada reports its jobs report this Friday coming, and despite the positive trend developing, it is largely a flat month expected in Jan.  The BoC were a little more cautious on how they followed up their last rate hike, taking a more cautious line as they have been for the most part in the lead up to the 2 rate hikes seen last year.  Deputy governor Wilkins is also scheduled to speak and she has little choice but to exercise restraint given the propensity to overreact.

Plenty of Fed speakers also due next week, and we highlight this on this occasion given most have been ardent doves.  Messrs Bullard, Evans and Kashkari have all been calling for a pause at the FOMC, and all though none of the above are voters this year, it will be interesting to see if they change their tune in light of the data readings last week as well as a weaker USD. 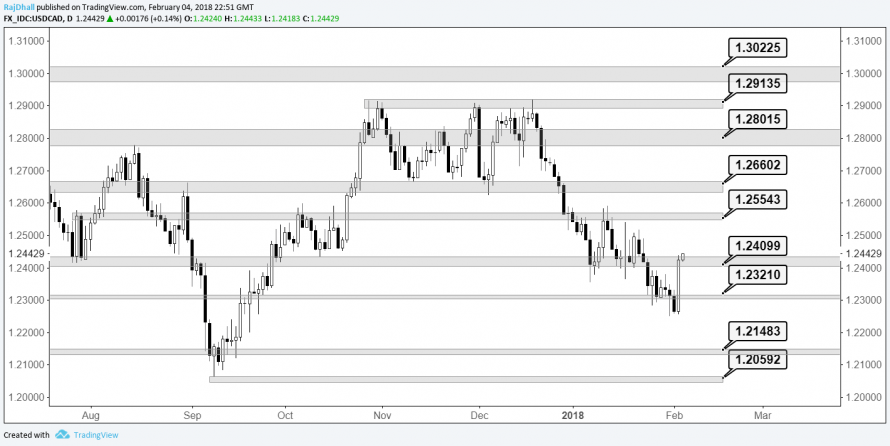