"Fading Ray" - Why One Trader Is Buying What Bridgewater's Selling

It seems like everyday we get another headline about the ever increasing short European equity bet from the world’s largest hedge fund. I can’t figure out why Ray Dalio’s Bridgewater needs to disclose their massive European equity position, but there can be no denying that they are all-in.

[Post publication edit: a couple much more knowledgeable readers have been kind enough to inform me that in Europe, short sales need to be reported much like long positions do in the US through 13F reports- link - thanks for the info!]

Bridgewater Associates LP now has wagers valued at more than $14 billion that stocks will decline in the region after it disclosed a $1 billion short bet against Munich-based engineering firm Siemens AG. The value of the firm’s short bets in Europe has more than quadrupled this month and also includes a wager against the German sportswear manufacturer Adidas AG.

Bridgewater has been building positions against Italian companies including Intesa Sanpaolo SpA, Enel SpA and Eni SpA ahead of national elections in March. That vote is unlikely to produce a clear winner, hindering the country’s ability to produce economic reforms. The firm is also betting against energy, manufacturing and construction firms in Europe. 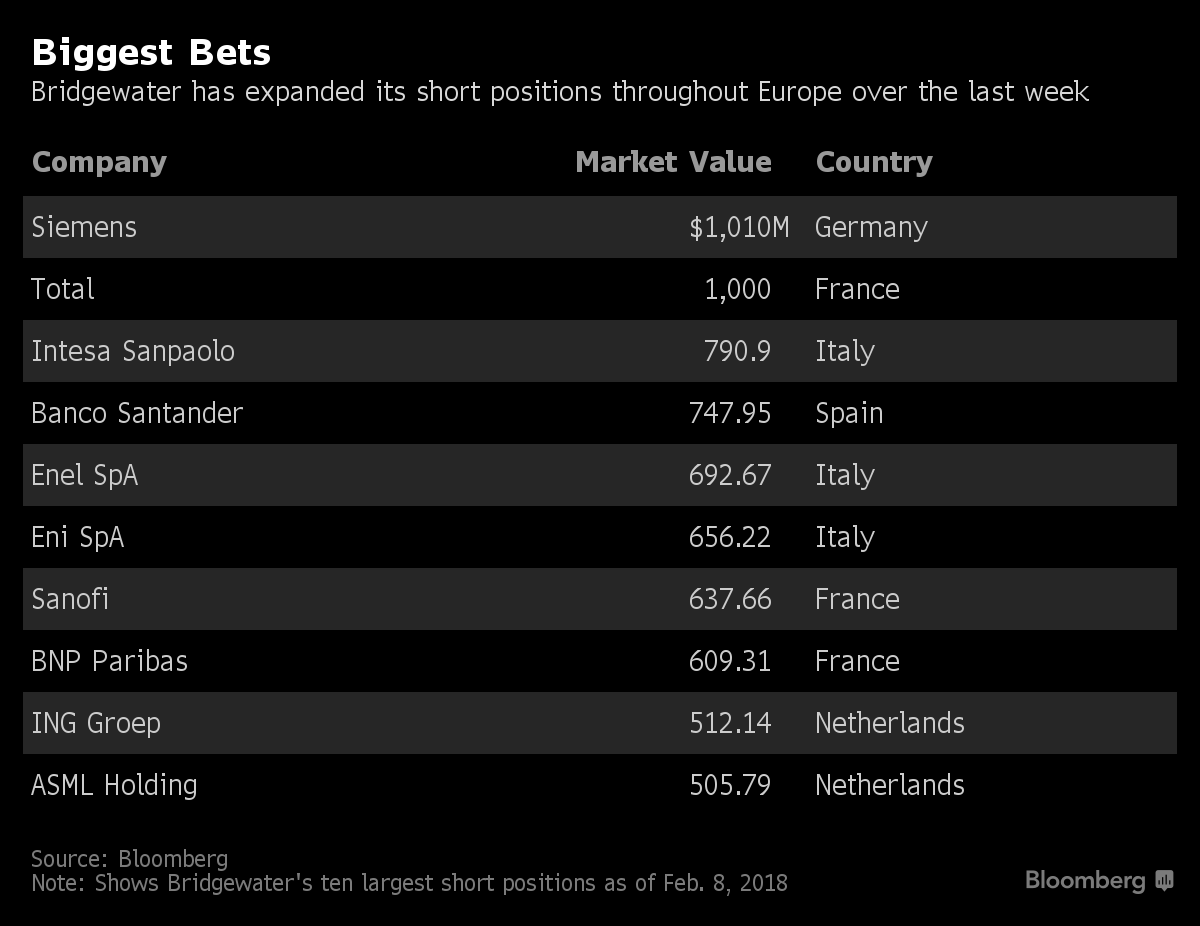 Now that’s a big position - even for Bridgewater. So what’s going on?

We will probably never know, but I think it’s an interesting exercise to speculate on the reasons for the massive bet.

There can be no doubt that it’s most likely a hedge against an existing position. That might be an equity long position from another country or maybe it’s against their European credit book. But either way, you don’t slap on a short position of this size unless you believe there is a good chance that European equities will decline.

But why does Bridgewater feel so strongly? Well, in no particular order, here are my best guesses.

Over the past six months, the ECB Council has tiptoed into trying to set the market up for a tightening cycle. Well, tightening might be too strong a word. Maybe a take-their-foot-off-the-accelerator cycle. Draghi & Co. are petrified they will nip the nascent economic recovery in the bud, so they have been loath to proceed too quickly, but maybe Bridgewater knows something the market is missing. Perhaps the ECB is about to embark on a full blown tapering expedition.

After all, although the German 2 year real rate has risen from the mind boggling stupid level of negative 300 basis points, it is still firmly in negative territory. 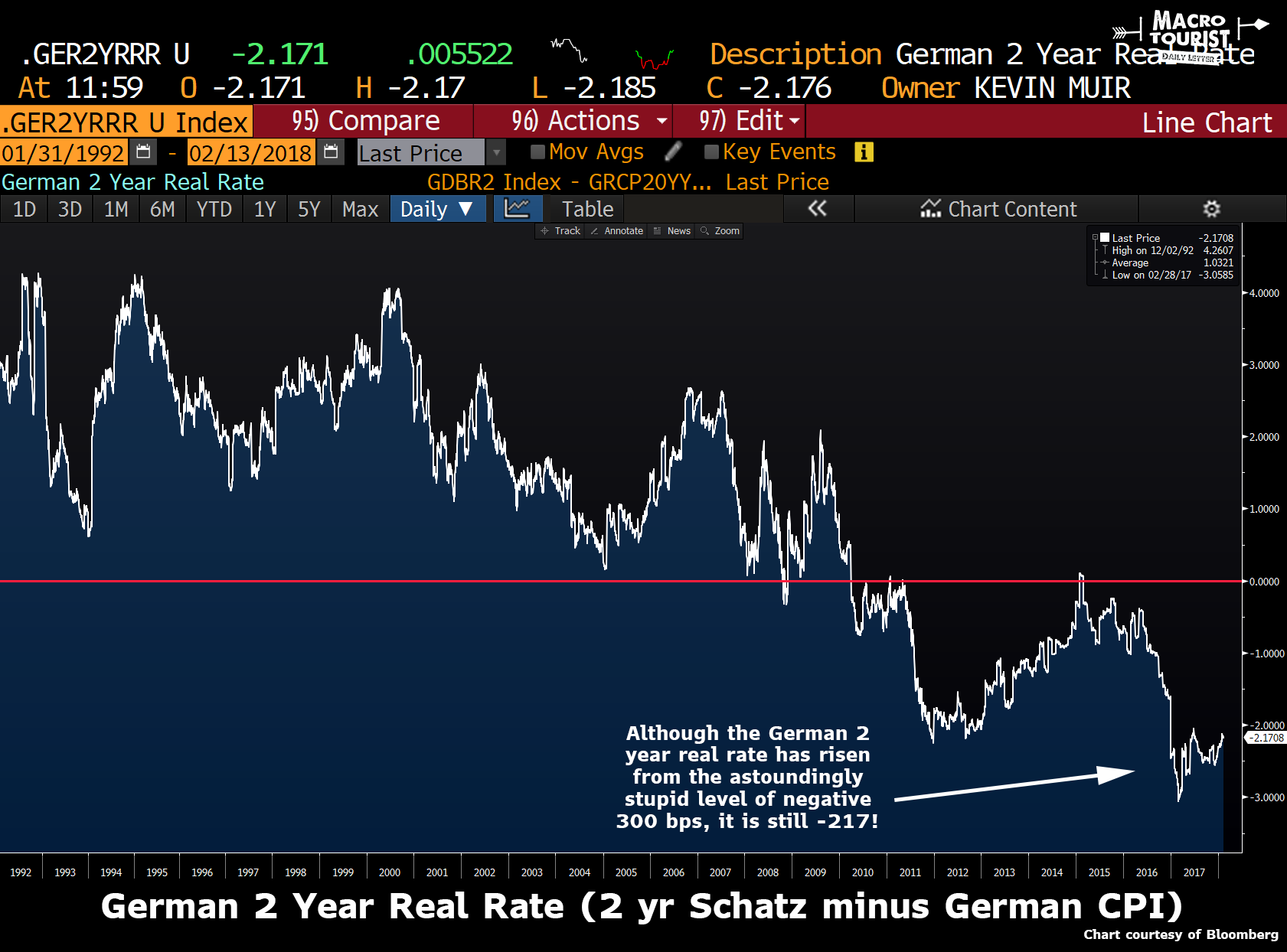 And even with 200 basis points of tightening, rates would only be approaching neutral. If you look at the European shadow rate (for an explanation of shadow rates, see this post, although it is also way off the lows, it’s still deeply in the red. 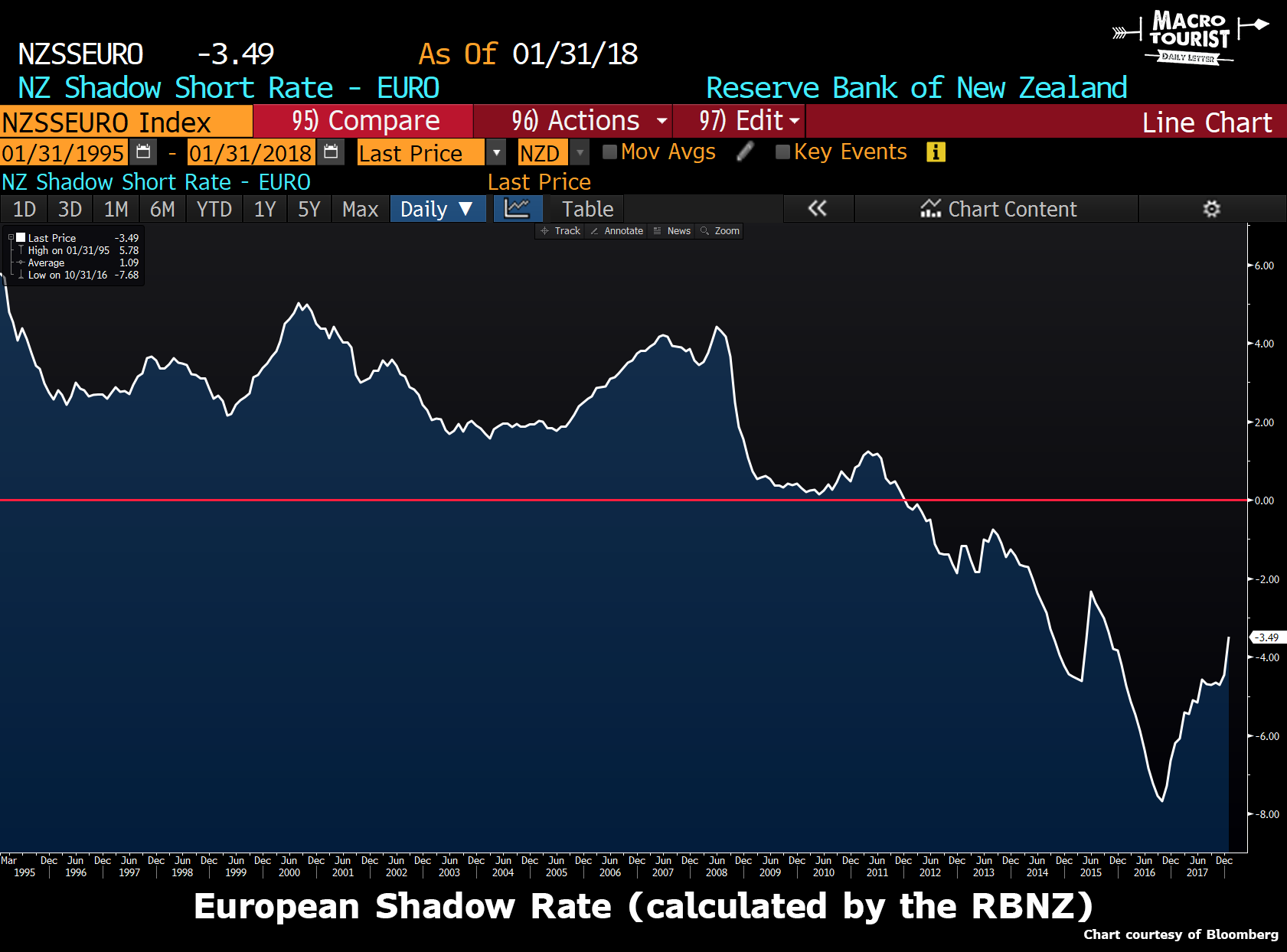 It wouldn’t be at all unreasonable for the ECB to be on the cusp of a major tightening phase. If so, shorting European equities might be the perfect way to express this trade. Especially if you believe that an overly hawkish ECB will have relatively immediate effects on the economy and markets. Bridgewater probably has the greatest information pipeline in the world, so it would make sense that they would be able to get ahead of a dramatic change in the ECB policy.

Next up is the possibility that Bridgewater is hedging against an Italian election surprise. I say surprise, but that’s kind of a misnomer. After all, the anti-establishment party, Five Star Movement (M5S) is the bookmaker favourite. But maybe Bridgewater believes that the market is underestimating the possibility of M5S instituting policies that would disrupt the financial system.

As I researched this outcome, I came to the conclusion that the Italian election is a complicated difficult to predict affair. There are a bunch of new electoral rules that are being tested for the first time, and it does not appear that any party has enough votes for a clear win.

But don’t forget that Trump wasn’t supposed to win either, so maybe Bridgewater is setting up for an election rout by the Five Star Movement.

Now, if that happens, I am unsure if Dalio & Co. will have set their portfolio up optimally. Sure, the initial move might be lower, but let’s not forget the market reaction to both the BREXIT and Trump surprises. 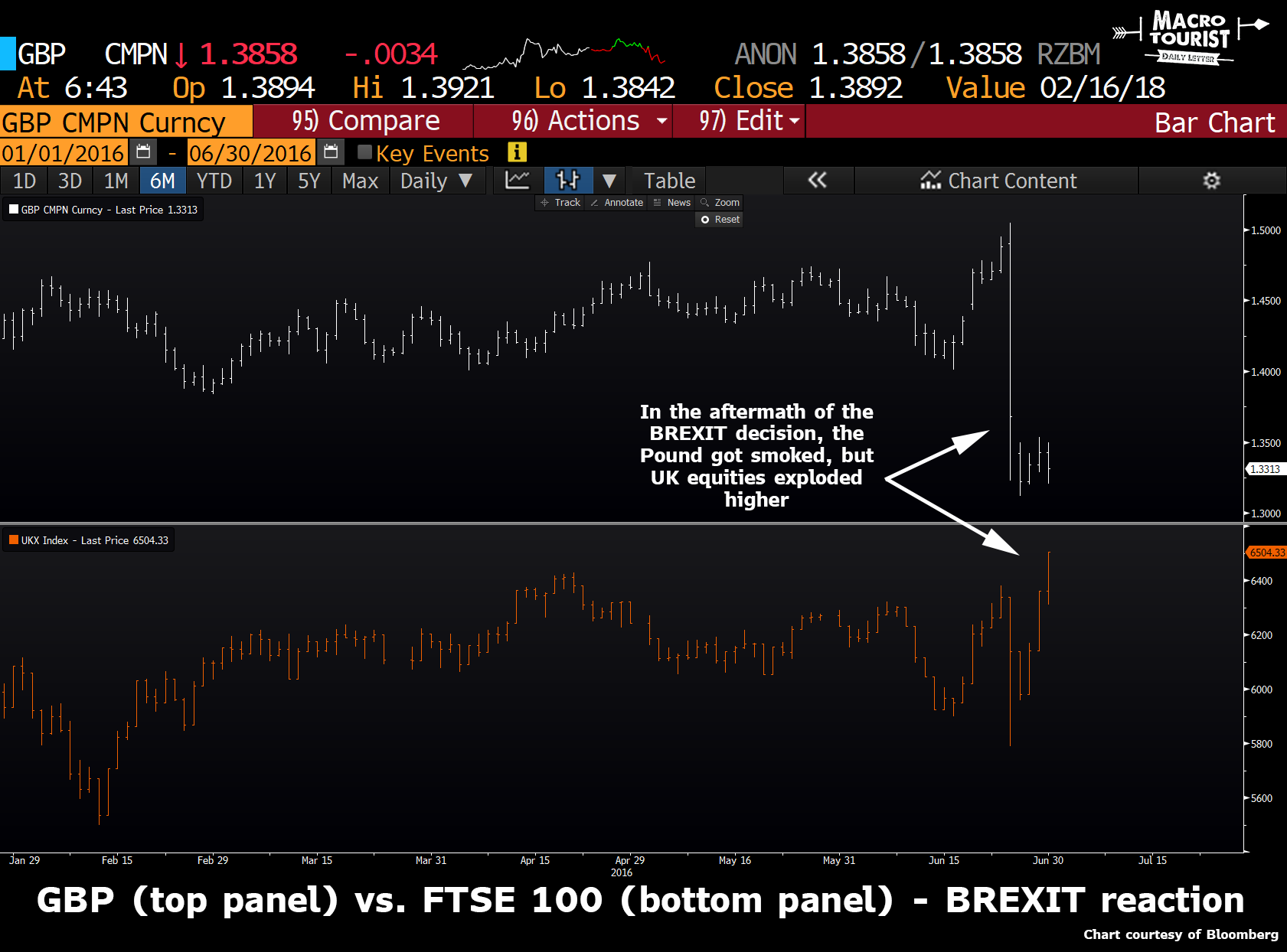 Although the knee jerk reaction might be to sell equities, Euro-union angst from an anti-establishment Italian party win will most likely be accompanied with a sharp sell off in the Euro currency and easier monetary policy from the ECB. Both of these will be European stock friendly. I am sure that Bridgewater understands this possibility, so I view their big short European equity trade as unlikely to simply be a hedge against the Italian election. To hedge that risk there are much better trades to put on.

Many market participants underestimate the impact that the Chinese economy has on Europe. During this last economic cycle, China has overtaken America as the most important trading partner for Europe. I have written about the possibility that China will purposely slow their economy in 2018 and 2019 (This Cycle -it’s China!), and if that forecast ends up being correct, then it would definitely have an outsized impact on Europe. Shorting European equities would be a logical way to hedge this risk.

If I had to make a guess on what is going on in the Westport Connecticut offices of Bridgewater, worries about a global slowdown, led by China which would affect Europe more so than the other large economies, would be the reason for the massive bet. The other reasons are too binary and not encompassing enough to justify strapping on so much risk. To make a bet of this size, it has to be a longer term view - not some fleeting worry about an event that might or might not happen.

Although I understand some of the reasons why Bridgewater and the other European equity bears might be betting against the Eurostoxx, I respectfully am willing to fade their pessimism. And even though there is an argument to be made that the credit creation mechanism in Europe is royally gummed up, I think the ECB will do whatever it takes and throw money at the European financial system until it works. As dumb as it sounds, I believe the ECB will print whatever amount in whatever asset it takes to keep the European Union alive.

It’s been a while since anyone has discussed the Target 2 liabilities, but I am going to remind faithful readers about this convoluted European banking system peculiarity. Although the ECB is Europe’s head Central Bank, each union member still has their own Central Bank. These individual country Central Banks are still in charge of their country’s chartered banks, and they are a conduit between the ECB and the individual banks.

Since the ECB sets the rate for the union as a whole, there are times when capital flows from one country to another. So if Germans have more savings to lend, the Bundesbank deposits money with the ECB which then lends it out to the Italian Central Bank which then proceeds to dole it out to the requesting Italian banks. These transfers are called Target 2 Imbalances.

And well, they are big. Empire State building big. 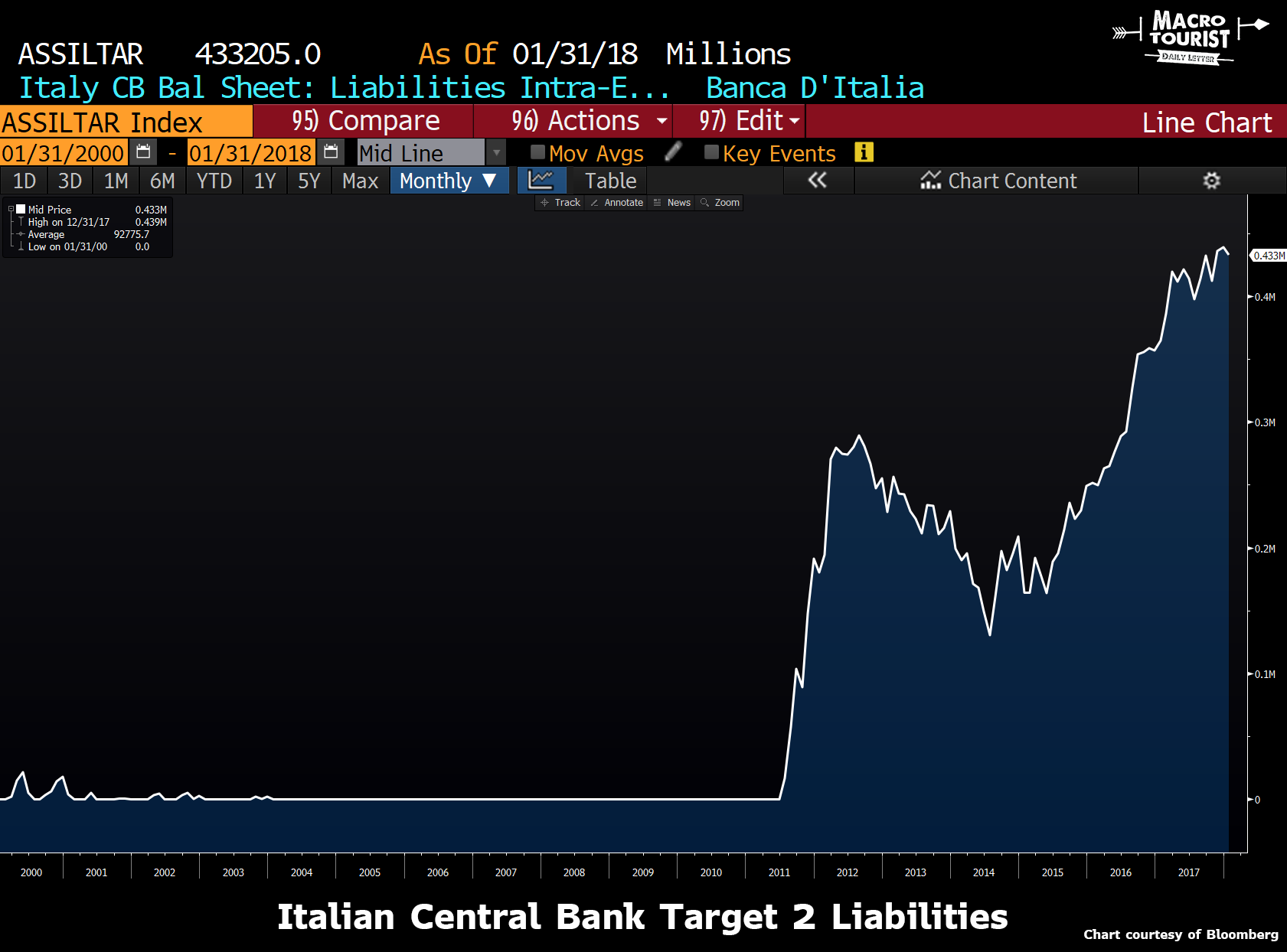 Let’s face it, there is no way this will ever be paid back. And there is no way that the EU can magically dissolve and have these imbalances somehow get squared up. Although Italy is the worst, the whole thing is a mess. 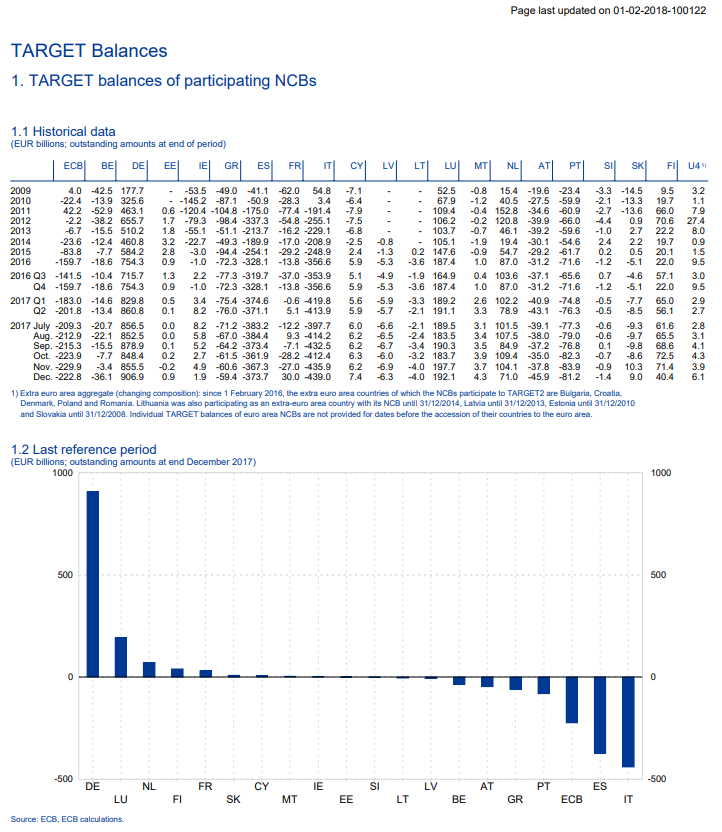 I would argue that Italy is probably more in control of monetary policy than the Germans would ever care to admit. Sure, the Germans are the creditors, but the only way this will ever be paid back is by the ECB inflating it away.

So ultimately, I am hesitant to short European equities as, if anything goes wrong, anything at all, then the ECB will emulate the BoJ and the SNB, and simply ramp their balance sheet from 40% of GDP to 100% - just like both of those countries did. Count me out of writing any pink tickets in European equities. And in fact, I still think the chances of a Central Bank gone rogue melt-up is way higher than the market believes. I guess that puts me on the other side of Bridgewater’s trades. Oh well, I am sure that at least Ray would appreciate my honesty…