Matteo Salvini, Italy's Leader accuses the EU of swindling the UK on Brexit. 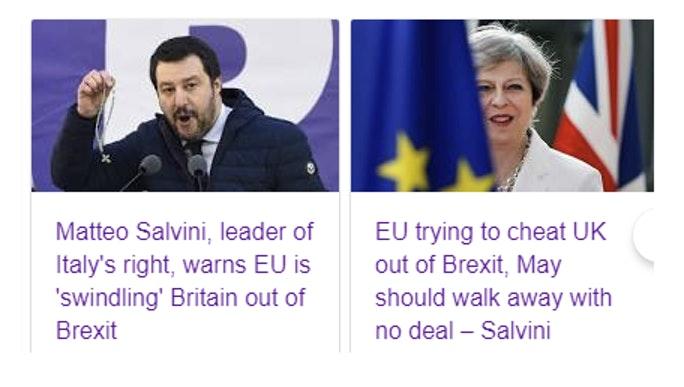 In an exclusive interview with The Sunday Times, Matteo Salvini urges Theresa May to adopt a tougher stance in her Brexit negotiations with the EU, saying: “My experience in the European parliament tells me you either impose yourself or they swindle you.”

The far-right interior minister, a former MEP and considered Italy’s most powerful politician, says May should be prepared to walk away without a deal: “Because on some principles there is no need to be flexible and you should not go backwards.”

He also accuses the EU of trying to punish the UK for voting to leave the bloc: “There is no objectivity or good faith from the European side.” The leader of the anti- immigrant League party made an extraordinary intervention as May dispatched members of her cabinet across Europe to sell her Chequers deal.

“I remember the referendum stage as an example of participation and freedom; I hope it can be an opportunity for the British.”

He added that the Italian government would welcome one-to-one talks with May.

Salvini is the effective leader of Italy. He is the one calling the shots.

Five-Star, part of the current coalition, is also anti-EU. The way Italy's parliament is structured, 60% is a massive majority.

There is no real opposition to the current government. The EU will not be pleased to say the least.