Article by David Haggith published on The Great Recession Blog 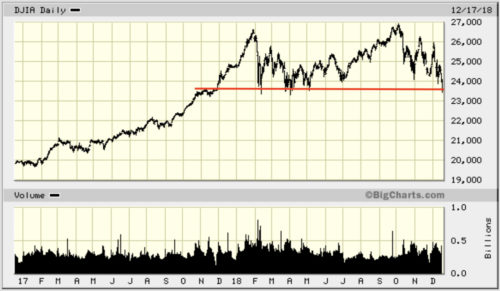 It’s downright wintry on Wall Street right now. Firmly establishing the worst start of a December for the US stock market in 38 years, all three major stock indices plumbed the greatest depths they have hit all year … and it’s been a bad year! The S&P 500 and the Nasdaq closed at 2,546 and 6,754 respectively. The Dow closed down 504 points to rest at 23,593. If it closes the tiniest nudge lower to a point it hit midday today, it will establish the worst start to a December since the Great Depression. Moreover, the market fell on swelling volume at a time of year (Santa-Claus-rally-time) when volume of trading is supposed to decrease. Sounds like traders are holding vigil around their computer screens, rather than setting out on vacation.

Two of the major indices have made their death cross, and the Dow now sits right on the edge of crossing that boundary, which marks a definite change in the market’s major trend line from up to down. (A “death cross” is when an index’s 50-day moving average drops lower than its 200-day moving average. Since this happens after both trend lines have turned downward, it indicates the short-term trend is accelerating in its bender for the bottom.) All indices have broken through the long-term trend line established by the lowest points of the nearly decade-long bull market since it began at the bottom of the Great Recession in 2009:

One more down day could put the Dow over the death-cross edge, too. At that point, the market technicals will be all-in for a bear market. The S&P crossed ten days ago, and the Russel 2000, in mid-November. The Dow already joined the S&P and the Nasdaq in entering correction (a 10% drop). Over 50% of the S&P’s individual stocks are already in their own bear markets (defined as a drop of 20% or more from their last peak). In fact, ALL of the FAANG stock, which had been “the generals” leading the bull uphill are in their own individual bear markets. Other big names include several banks and Home Depot (due to Housing Collapse 2.0, which I said was coming and proclaimed as having arrived last summer). The Russel 2000 is now just a hair’s breadth from qualifying as a bear market. It could get there in one more day. All major indices at this point are, again, negative for the year.

I wrote just yesterday that I had little doubt this is a bear market (big surprise) as the market has morphed from buying the dip to selling the rip. At this point, the market is essentially now hanging on the edge of its last and strongest line of support for 2018. If the Dow joins its rivals to fall below this level, it’s a long way down before anything finds even weak support.

The driving tensions that decimated December are rising interest rates, an inversion of part of the yield curve, slowing global growth and U.S.-China trade tariffs. On top of that Trump and the Dems both confirmed this weekend a resolute stand-off on closing down the government over the border wall that Mexico reneged on buying. The fall of housing and autos isn’t helping.

Ironically, Trump’s pressure on the Fed to stop raising interest rates may press the Fed to raise rates this week even in the present perilous situation just to prove they’re not being bossed around by the president:

“The market feels like the Fed has to hike Wednesday,” to protect its image of independence amid calls from the president to stop raising rates, [Vincent Reyes, director of trading operations at SEIA] told MarketWatch. “But the logic for hiking is weak.”

With more and more voices starting to sound like yours truly, there is less and less debate over whether we are in what will just prove to be a market correction (it already is that much for certain) or the start of a bear market. Here are some (not the usual voices) who now concur with me about this being a very perilous market:

You didn’t have that disbelief if you read here. You knew it could and would. While the market majority was telling you to ride it out, I’ve let you know exactly what you could expect this fall to look like. If you waited, the exits are now crowded with people wanting to get out, and that is, indeed, a perilous situation to be in. The problem at the moment is the market really doesn’t have anything to stop it from falling, and falling objects need something to stop them.

I wouldn’t want to be a crow swinging on a wire in this winter storm.

Liked it? Take a second to support David Haggith on Patreon!