Let’s get this straight. The other day, Robinhood began interfering with popular stocks that experienced a sudden surge thanks to a massive internet initiative. GameStop, AMC and BlackBerry - just to name a few. The catalyst: a 5.7 million person strong Reddit community, WallStreetBets (WSB).

This community, referring to its own members as degenerates, took Wall Street by storm the other day. They rallied enough people on the internet to protect their beloved GameStop company. Essentially, one of the GameStop investors said that the company is going downhill and he subsequently tried to short the stock.

That’s when the fun began.

Or should I say, that’s when the retaliation started. People were not ready to say goodbye to GameStop. Gamers on Reddit heard the call and they answered. They were able to harness the power of the community to gather enough investors and make the price go up in spite of the investor’s short investment.

Sounds like a nice story where average people are able to finally get a win against the billionaires and hedge funds on Wall Street. That’s where we’re wrong. In broad daylight, popular investment platform Robinhood came to the defense of the big whale investors. They removed the buying ability of the aforementioned stocks so that billionaire investors won’t lose any money in their investments. 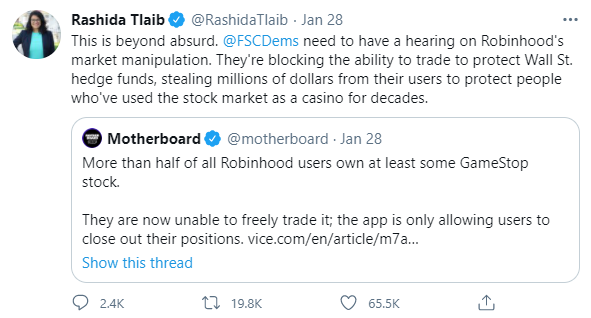 Rashida Tlaib, United States Congresswoman, highlights the hypocrisy and magnitude of this move made by Robinhood.

Additionally, Senator Sherrod Brown came to the defense of Reddit community WSB, “people on Wall Street only care about the rules when they’re the ones getting hurt.” 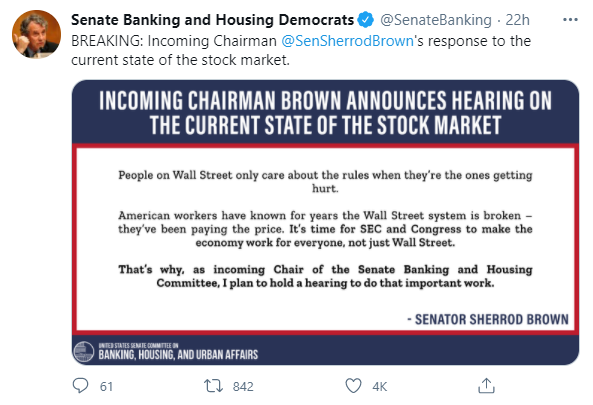 People didn’t take this news lightly. In fact, the WallStreetBets community has increased in subscribers by over 3 million just in the last 48 hours.

The final unexpected twist in this story was the involvement of blockchain companies in the media. CEO of TRON, a popular blockchain company aimed to decentralize the web, called for everyone to #deleterobinhood on his Twitter page. What’s more is he pledged to support WSB and GameStop by investing 10 million in GME. 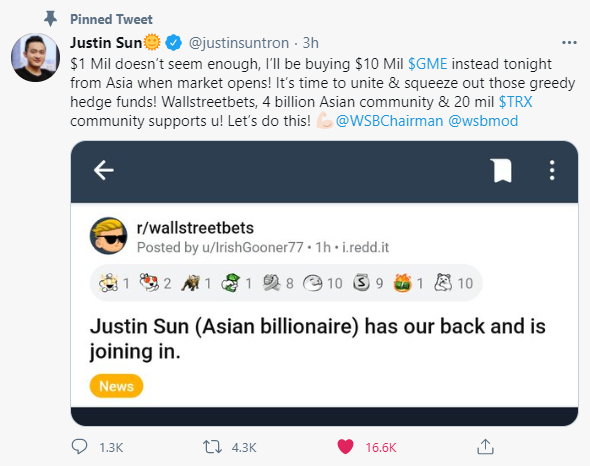 This posits an interesting distinction between the nature of blockchain and the Robinhood scandal. In proper projects, there isn’t a single entity that governs what you can and can’t do. Everyone is on the same team looking for the most promising new technologies.

For example, regulated exchanges like Currency.com are geared towards working with people to find the best investment. Their community is always at the forefront regardless of socioeconomic status. A surge in price like Gamestop would have been a huge win for their communities - especially since they offer trading on crypto and non-crypto assets with the power of tokenization.

Billionaires and hedge funds have always had control of the markets and the average person has been fending for themselves. Now that we’re seeing opportunities for people to gather and match the power of the billionaires, companies are forced to make rash decisions. David Portnoy, CEO of Barstool Sports says it best, “Robinhood steals from the rich and gives to the poor, [but this time] they are stealing from the poor and giving to the rich”.

It’s all a matter of which side you want to be on when you’re deciding which platform to use for investing. A company that supports all users equally, or a company that’s willing to pull the rug out from under you without any explanation or promise. Maybe we’ll see more people leave Robinhood for alternative platforms - possibly even blockchain protocols that treat everyone equally by design.