Gold's 1.2% gain yesterday was the largest since March 26 and its four sessions of gains is the longest winning streak in two months.

A positive sign for gold was that US COMEX futures volume was the strongest in a week and gold rose despite a sharp 1.5% drop in the S&P 500 and other equity indices and a large fall in crude oil and grains.

Gold appears to be catching a breather today and is taking a break after the four sessions of consecutive gains driven by safe haven flows on a cloudy global economic outlook.

Gold’s proven safe haven attributes were clearly seen again yesterday as the sharp bout of risk off in international markets saw gold again have an inverse correlation with riskier equity and commodity markets.

Markets continue to digest the very poor US employment number which has led investors to again question the rose tinted view of the US economic ‘recovery’.

The Fed’s beige book will be released at 18.00 GMT.  Investors will also watch the European government debt market, after Italian and Spanish debt was met with decreased demand due to shaky euro zone economies and renewed contagion concerns.

Chinese gold demand remains very strong as seen in the importation of 40 metric tonnes or nearly 40,000 kilos of gold bullion from Hong Kong alone in February.

Hong Kong’s gold exports to China in February were nearly 13 times higher than the 3,115 kilograms in the same month last year, the data shows.

Shipments were 72,617 kilograms in the first two months, compared with 10,564 kilograms a year ago or nearly a seven fold increase from the record levels seen last year.

China’s appetite for gold remains strong and Chinese demand alone is likely to put a floor under the gold market. 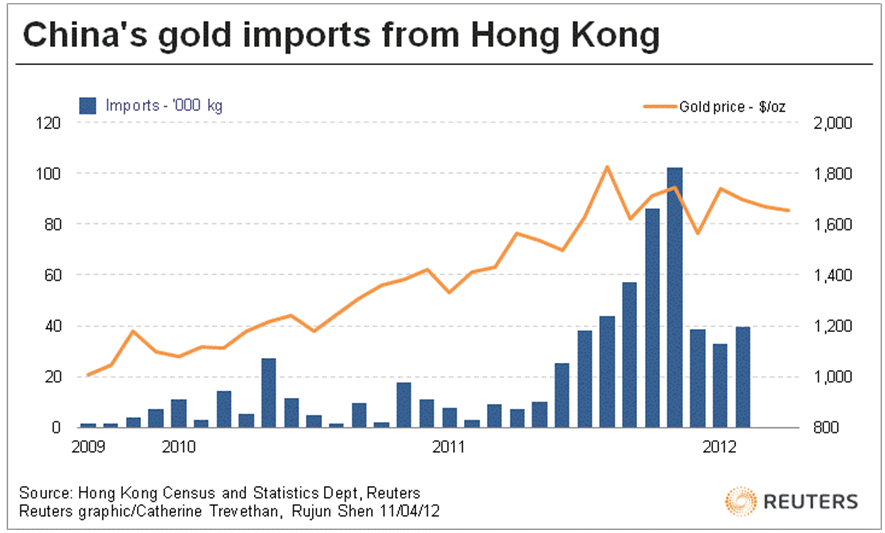 Mainland China bought 39,668 kilograms (39.668 metric tons), up from 32,948 kilograms in January, according to export data from the Census and Statistics Department of the Hong Kong government.

Demand has picked up again after the Lunar New Year and demand has climbed in China as rising incomes and concerns about inflation lead to store of value buying.

There is also a concern about the Chinese stock market which has gone sideways since 2001 (see chart) and increasing concerns that various property markets in China look like bubbles ready to burst.

Consumer demand for gold beat India for the first time in almost three years in the fourth quarter and China may replace India as the biggest buyer annually this year.

The massive gold purchases may signal the People’s Bank of China is continuing to secretly accumulate gold reserves.

Reuters report that there are suspicions that the number could include purchases from the public sector, as the market was largely quiet during a post-Lunar New Year holiday slump in February. "On the public level, China's central bank will continue to accumulate gold, which is easier than liberalising their capital account and currency," said Friesen of SocGen, adding that building gold reserves would help China's push to turn the renminbi into a global currency.

Accommodative monetary policy will remain an incentive for private investors to buy into gold, he added.

The nation last made its reserves known more than two years ago, stating them to be 1,054 tons.

It is important to note that in past years, Hong Kong gold imports have accounted for about half of China's total gold imports. China itself doesn’t publish gold import data and the very high and increasing demand from Hong Kong is only a component of overall Chinese demand.

The per capita consumption of 1.3 billion people continues to increase from a near zero base meaning that this is indeed a paradigm shift and not a blip or ‘flash in the pan’.

It means that gold will likely see record nominal highs - possibly before the end of the year.

Prudent western buyers wishing to protect and grow wealth will again buy gold on the dip as the Chinese are doing.

(Bloomberg) -- Russia’s FinEx Plus Plans Gold Exchange Traded Product This Year
Asset Management Co. FinEx Plus LLC plans to start a gold exchange traded product in Moscow and expand that to other commodities this year.

FinEx is in negotiations with the Micex-RTS exchange in Moscow to list the gold product, said Evgeny Kovalishin, general director. FinEx is partly owned by Andrei Vavilov, Russia’s former first deputy finance minister, according to Kovalishin.

COMMENTARY
Was That The Bottom In Gold? – MarketWatch

Price Manipulation in the Gold and Silver Market - RT

Economist’s Bishop On Concerns Re Paper Currencies and Gold - MSNBC