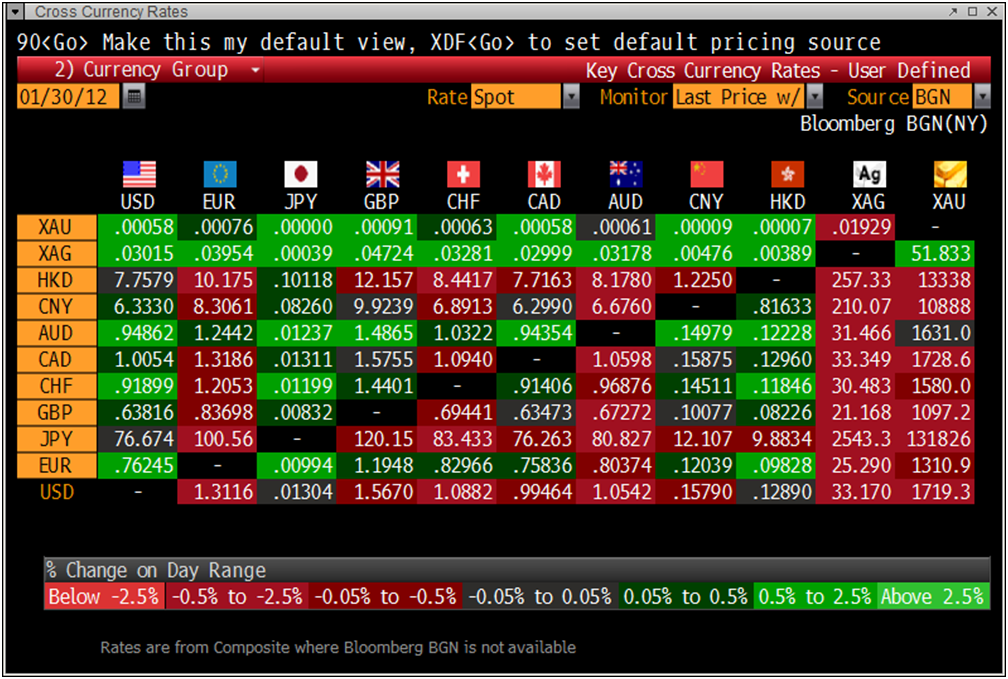 Gold prices fell in Asia and in Europe this morning with profit taking after last week’s 4.3% gains seems the primary reason for today’s weakness.

However, gold prices are likely to continue to be supported by the continuing Greek debt saga (and risk of contagion) and developments in the increasingly tense situation with Iran (and the risk of war).

US President Obama, signed a law on December 31st that seeks to penalize countries that import Iran's oil or transact with the Islamic Republic's Central Bank. Europe has also imposed sanctions on Iran's oil imports from July 2012. Measures also include an immediate ban of all new oil contracts with Iran and a freeze on the assets of the country's central bank within the EU, due to their nuclear program.

India has had friendly relations with Iran for years and will now find itself in a mire of political manoeuvring . It wishes to keep relations on a good footing with the US and Europe but has the dilemma of being dependent on oil from Iran and other countries.

EU
These tensions plus the decline of the dollar’s value has strengthened gold in the past month.

European leaders are meeting today in Brussels about jobs and economic growth but the Greek debt situation may again dominate.

As long as the failed panacea of recent years - to print and electronically create money and pile more debt upon already massive levels of debt – continues to be seen as the solution – gold’s foundations remain very secure.

Only the massive writing down of and forgiveness of debt and massive deleveraging in the banking system can help ameliorate the European and global debt crisis.

China
Xinhua, the official press agency of the government of the People's Republic of China reports that a "gold rush" swept through China during the week-long Lunar New Year holiday this year, with demand for precious metals and jewelry surging since the Year of the Dragon began.

Data released by China's Beijing Municipal Commission of Commerce shows a 49.7% increase in sales volume for precious metals jewelry and bullion during the week-long holiday (over last year), which lasted from January 22 to 28 over that of last year's Spring Festival.

One of Beijing's best-known gold retailers, Caibai, saw sales of gold and silver jewelry and bullion rose 57.6% during the week long New Years holiday  according to data released by the Ministry of Commerce (MOC) on Saturday,

Other jewelry stores across the country also saw sales boom during the period, with customers favoring New Year themed gold bars and ingots and other types of Dragon themed jewelries.

During the week-long holiday, which lasted from January 22 to 28, the sales volume in just one gold retailer, Caibaiand Guohua, another of Beijing's top gold retailers, reached about 600 million yuan (nearly $100 million).

Caibai began selling gold bars as investment items during the 2008 Beijing Olympic Games, but the trend of buying gold or silver bars during the Spring Festival has taken off in the past two years.

In much of the western world where gold remains a fringe investment of the smart money (some pension funds, central banks and high net worth) the retail public has predominantly been selling gold (in the form of jewellery) and very few own gold coins or bars.

This is in marked contrast to China where buying gold as a hedge against inflation and as a store of wealth has now firmly entered the mainstream in a country of 1.3 billion people.

"Long treasured by Chinese, gold is no longer owned only by a privileged few, but has become a new investment channel open to all," said Guan Qiang, assistant manager at Caibai.

Gold's secular bull market will likely continue until gold has entered the mainstream and a 'gold rush' consumes the retail public in the EU, UK, US and other western nations.

(Emirates247)
Gold up 10% on rumours that India, China will pay in bullion for Iran oil

COMMENTARY
(Forbes)
Gold Is The Hottest Currency In The World

(NASDAQ)
Silver Singularity Is Near