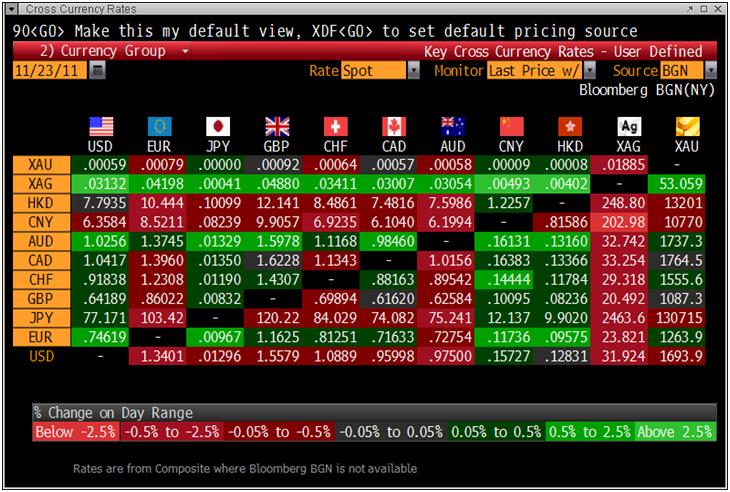 Gold is lower in all major currencies today except euros with euro gold having risen 0.25% to EUR 1,263/oz.

The euro came under pressure due to the surprise collapse in new Eurozone industrial orders which led to Germany failing to get bids for 35% of bunds offered. The German 10-year bund yield rose sharply from 1.92% to over 2.06%.

This is one of Germany's worst auctions since the launch of the Euro with the Bundesbank having to pick up nearly 40% of the 6 billion euros on offer.

The German auction in turn led to further weakness in European equity markets. Asian equity indices followed US equities lower after news of a new US bank stress test and then the poor Chinese manufacturing data.

Gold will be supported at these levels as the euro zone debt crisis continues to degenerate with the periphery increasingly affecting the core – leading to contagion.

The bond auction in Germany is a disaster. If Germany has to buy its own bonds, it is frightening to think how other European nations, including France, will fare at bond auctions in the coming weeks.

Gold remains possibly the most under-owned asset in the world, and definitely the most infrequently and poorly covered in the mainstream media.

The specialist financial press and media (FT, Bloomberg, Reuters, WSJ, CNBC, Dow Jones etc.) covers gold, but the mainstream media continues to report on gold sporadically at best. When the mainstream media does cover gold it is covered badly with poor analysis and a continuing simplistic suggestion that "gold is a bubble".  It fails to comprehensively cover the gold market.

The vast majority of investors and savers in the western world have no allocation to gold whatsoever and know little or nothing about gold.

Daytime TV and the popular press and media almost never have segments about how to invest in, or own gold.

The 'woman and man in the street' in much of the western world continues to sell gold as seen in the 'cash for gold' phenomenon. This is in marked contrast to the Chinese and Indian public that has been aggressively buying bullion as a store of value.

Inquiries and sales from the general public remain anemic and there has been only a very slight pick up in demand from the public - despite the real deterioration in the outlook for the Eurozone, the US and the global economy.

GoldCore remains confident that most of our business is coming from educated investors.

This means existing clients who already have allocations are increasing their allocations, high net worths and some corporates concerned about deposits due to currency and systemic risk.

The majority of the public does not understand gold and the importance of diversification.

There continues to be a lot of preconceived notions, lack of knowledge and ignorance about gold as a safe haven asset and as an important diversification.

A plethora of excellent research articles by the World Gold Council, Casey Research (see their excellent report on gold in commentary today), major banks, ourselves and many others continue to be ignored by most of the media.

Comprehensive research is ignored. Singular and minor news events such as a few gold ATMs globally or comments by George Soros or Nouriel Roubini are focused on in a lazy fashion and used to suggest that gold is a bubble.

Financial ‘experts’ and ‘advisers’ with little or no experience or knowledge of the gold market often speak authoritatively about gold and generally in a negative manner which dissuades investors and savers from properly diversifying.

The case for owning gold has never been stronger and yet popular media and public skepticism remains high.

The lack of coverage in the mainstream media and the occasional poor coverage is symptomatic of a bull market in its infancy.

From the GoldCore Trading Desk
There are reports of some US and UK bullion dealers not having supply of certain bullion product – particularly silver bars.

We currently have stock of nearly all major bullion products in volume and ready for immediate delivery.

With regard to gold product, there are 1 week delays for kilo bars and for 1 ounce Krugerrands and Philharmonics.

(Mish’s Global Economic Trend Analysis)
Perfect Storm the Most Likely Scenario; Is Europe Set to Declare a Chapter 11 in Early 2012?

(24HGold)
The Two Prerequisites for Hyperinflation