Greece’s Lenders Have The Right To Seize National Gold Reserves

Greece’s Lenders Have The Right To Seize National Gold Reserves

Spot gold hit a 3 month high of $1,781.40/oz yesterday rising for the third day in a row.  Gold has consolidated on those gains in Asia and Europe. 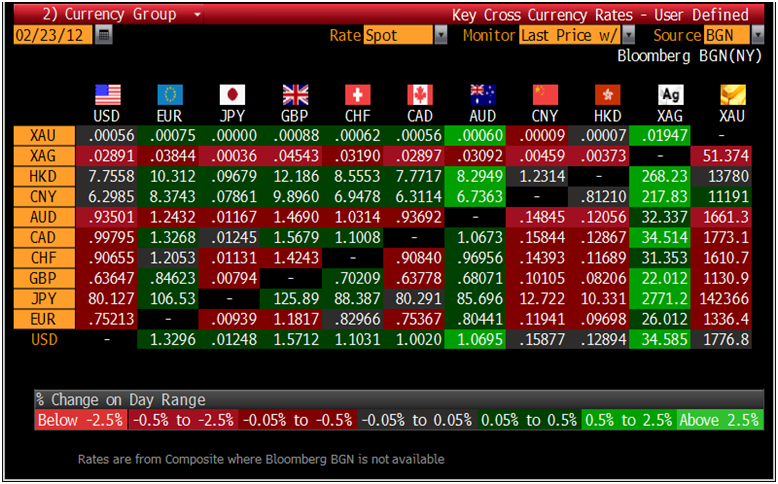 With recent resistance breached at $1,763/oz, gold could reach the psychological resistance of $1,800/oz very shortly - we are only 1.3% below that level now.

All major currencies fell against gold yesterday and the Japanese yen and British pound both took a pummelling and were more down 2% down against gold.

Gold is again signalling in advance coming fiscal issues in the UK and Japan. In February alone, the yen is down a substantial 7% against gold and in the last 7 weeks since the start of 2012, the yen has fallen a whopping 15.5% against gold.

Yen gold strength is a precursor to the coming Japanese fiscal crisis. It likely also signals that gold is soon to break out in dollars and other currencies.

Global equity markets are showing jitters after disappointing economic data out of Europe and China and the threats by Russia’s Foreign Minister over Iran, leading to concerns that a serious confrontation is possible.  Conflict in the region will of course send investors towards the safe havens of gold and silver bullion.

The US existing home sales were smaller than expected in January and this contributed to the weakness in equity markets. There is also continuing concern that the latest Greek debt package has not addressed Greece’s deep structural challenges.

The current economic environment is good for gold. As long as governments continue to print money in an attempt to pull us out of this downturn, gold will continue to shine.

The New York Times reports that Greece’s lenders may have the right to seize the Bank of Greece’s gold reserves. 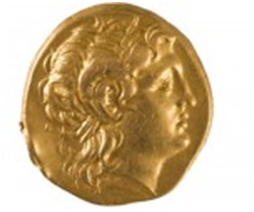 “Ms. Katseli, an economist who was labor minister in the government of George Papandreou until she left in a cabinet reshuffle last June, was also upset that Greece’s lenders will have the right to seize the gold reserves in the Bank of Greece under the terms of the new deal.”

The Reuters Global Gold Forum confirms that in the small print of the Greek “bailout” is a provision for the creditors to seize Greek national gold reserves. Reuters correspondents in Athens have not got confirmation that this is the case so they are, as ever, working hard to pin that down.

Greece owns just some 100 tonnes of gold. According to IMF data, for some reason over the last few months Greece has bought and sold the odd 1,000 ounce lot of its gold bullion reserves. A Reuter’s correspondent notes that “these amounts are so tiny that it could well be a rounding issue, rather than holdings really rising or falling.”

While many market participants would expect that Greece’s gold reserves would be on the table in the debt agreement, it is the somewhat covert and untransparent way that this is being done that is of concern to Greeks and to people who believe in the rule of law.

Recent months have seen many senior German government officials calling for so called “PIIGS” nations gold reserves to be used as collateral. Such as Angela Merkel’s budget speaker and his opposition counterpart who urged Portugal to consider selling their gold.

Norbert Barthle, Germany’s governing coalition budget speaker and his counterpart Carsten Schneider from the Social Democrats, the biggest opposition party, urged Portugal to consider selling some of its gold reserves to ease its debt problems. They called for a review of Portugal’s request for financial aid to include gold and other potential asset sales.

The Irish Times reported in November that EU finance ministers’ discussed a wider strategy by the ECB to sound out the possibility of gaining control over the gold reserves of the euro zone’s central banks.

Senior German politician, Gunther Krichbaum, a lawmaker in German Chancellor Angela Merkel’s governing coalition and Chairman of the Committee on the Affairs of the European Union of the German Bundestag has proposed late last year that Italy sell its sizeable gold reserves in order to lower its debt.

Gold’s importance as debt and third party risk free collateral and as the ultimate form of money is increasing by the day.

While Greece’s gold reserves are very small – Greece’s creditors and senior German and EU financial officials clearly understand the value and monetary and strategic importance of Greece and the other heavily indebted European nations gold reserves.

OTHER NEWS
(Bloomberg) -- Gold Rises to Three-Month High on Stimulus Bets, Computer Trades Gold futures jumped to a three-month high on speculation that the U.S. will extend a stimulus to bolster the economy, while automatic purchases by computer programs may have contributed to the rally.

“Some people started buying on expectations of further credit easing and then we saw an unusual accumulation caused by the technical buying” Streible said in a telephone interview.