A Modest Proposal To Boost US GDP By $852 Quadrillion: Build The Imperial Death Star

Since at this point US society is irrevocably split into two camps, on one hand those who believe Keynesian propaganda, where the only cure for unsustainable debt is more debt, and on the other those who believe that a return to a gold standard is the only way to prevent an epic socio-political collapse, also known in official US circles as "extremists", and since we know that the status quo will never let the latter get their way without a fight (quite literally and quite violently), it is only logical that 'if you can't beat them you have to join them'. In which case we believe that instead of breaking windows, or starting wars, or even expecting a growth boosting alien invasion that would lead to a surge in GDP that may or may not come, one should not only go for broke, but do so in style. As such we propose that the US, already the world's most expansionist and aggressive foreign policy power, not like there is anything wrong with that of course - it is all for the sake of liberating oppressed foreign oil, should one up itself and build the true symbol of its contemporary socio-historical status: the Imperial Death Star. Yet the real benefit in addition to blowing up various alien world that refuse to bail out the world's central bank confederacy, is that the cost of construction of said Keynesian masterpiece, would be an epic $852 quadrillion, which in turn would go straight to US GDP.

Now naturally since this entire amount would have to be debt funded, and since MMT tells us that America can issue any amount of debt without a hitch, it would only make sense that the US Treasury should sell $852 quadrillion in bonds at a few basis points in interest (negative rates if possible) post haste, and use the proceeds to construct said engineering marvel. Since modern economic theory tells us that every dollar in incremental debt is roughly equivalent to a dollar in GDP (as idiotic as that sounds), this would result in what can only be called the greatest golden age in the history of America, whose GDP would rise by over 56,000 times overnight to a little over $852,000,000,000,000,000, and all American citizens would be the richest (nominally of course, after all that is all that matters) not only in the world, but potentially in the known galaxy, overnight.

Alternatively, in the highly improbable case that the US can't issue this entire amount at sub 1% rates, and if the US Treasury finds that even the shadow banking black hole that is State Street and BoNY is unable to sweep $852 quadrillion in US debt that would have to be issued and promptly repoed back to mysterious and benevolent "actors", all America would have to do is find an alien world that would be willing to buy said amount of US debt, with Use of Proceeds solely to build the most destructive weapon in the history of the galaxy, take the money, build the station, and then use the Death Star on said gullible alien planet.

Because as Stalin would say if he were alive today to see what true central planning is: "Death is the solution to all problems - no alien, no problem."

Like that, poof - immediate debt discharge, even as the US is still long one Empirial Death Star.

And that is how you grow GDP by 56,000x overnight and #WinTheFuture.

As for the actual details of how one builds said Death Star we turn it over to Centives:

How Much Would it Cost to build the Death Star?

Building a massive space weapon is all very well, but you have to find the materials to build it with. It's easy to say that "sure, the Death Star would be expensive" but is there actually enough iron in the Earth to make the first Death Star? Centives decided to find out.

We began by loo king at how big the Death Star is. The first one is reported to be 140km in diameter and it sure looks like it's made of steel. But how much steel? We decided to model the Death Star as having a similar density in steel as a modern warship. After all, they're both essentially floating weapons platforms so that seems reasonable.

Which seems like a colossal mass but we've calculated that from the iron in the earth, you could make just over 2 billion Death Stars. You see the Earth's crust may have a limited amount of iron, but the core is mostly our favourite metal and is both very big and very dense, and it's from here that most of our death-star iron would come.

But, before you go off to start building your apocalyptic weapon, do bear in mind two things. Firstly, the two billion death stars is mostly from the Earth's core which we would all really rather you didn't remove. And secondly, at today's rate of steel production (1.3 billion tonnes annually), it would take 833,315 years to produce enough steel to begin work. So once someone notices what you're up to, you have to fend them off for 800 millennia before you have a chance to fight back. In context, it takes under an hour to get the steel for HMS Illustrious.

But then again, you can just take out a loan from the entire planet and then default on them in the most awesome way possible. 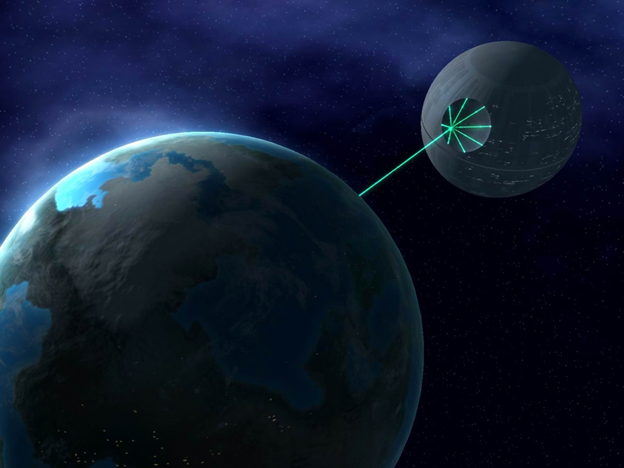