African Land Grab - "Acres for a bottle of Scotch"

Everyone who eats is aware that agricultural prices have been on a tear the past few years. With this has come a sharp increase in the value of arable land. Deep topsoil farmland in Iowa has changed hands as high as $11,000 an acre recently. That’s up from about $6,000 just a few years ago.

The shortage of arable land has gone global. Africa has seen an explosion of activity since 2008. How big is the land grab? Who’s doing the grabbing? It’s hard to tell as there is no central source of information and many of the transactions are not made public. An outfit called the Oakland Institute has been compiling information on this. From their June 8 press release:

The scale, rate and negative impact of land deals is alarming. In 2009 alone nearly 60 million ha– an area the size of France – was purchased or leased in comparison to an average annual expansion of global agricultural land of less than 4 million ha before 2008.

Consider these three maps. They describe the scope of what has happened in Mali, Sierra Leone and Ethiopia. The total in these two countries alone is 460k HA or 1.14 million acres. How big is that? Big. This is an area the size of Rhode Island, It is about 80Xs the size of Manhattan. But this is small beer. Consider what is going on in one of the poorest countries in the world, Ethiopia: 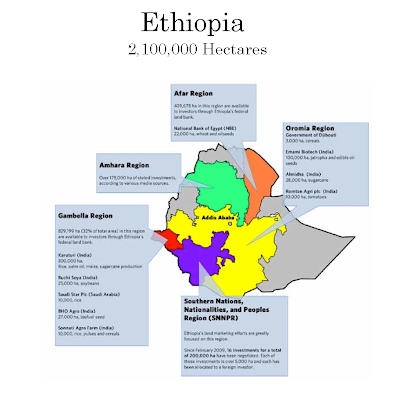 The total of 5.3mm acres in just this one country is equal to the size of New Jersey. It's the same as the combined area of both Connecticut and Delaware. If you’re thinking of a European comparison this is equal in size to about half the land of Switzerland, Denmark or the Netherlands. It’s equal to all of Israel.

Who’s playing in this big land grab? Hedge funds and other speculators are big, so are a number of US Universities. From The Oakland report:

Western firms, wealthy US and European individuals, and investment funds with ties to major banks such as Goldman Sachs and JP Morgan.

Surprised that Goldie and JP are involved? I’m not. Some other players:

A key player in the largest land deal in Tanzania is Iowa agribusiness entrepreneur and Republican Party stalwart, Bruce Rastetter, who concurrently serves as CEO of Pharos Ag, co-founder and Managing Director of AgriSol Energy, CEO of Summit Farms, and is an important donor to the Iowa State University.

Are the African countries getting a square deal? Not even close:

In Sierra Leone official regulation requires investors to pay $5 per acre, or $12 per ha, per year.

I loved this quote from Oakland:

“The research exposed investors who said it’s easy to make a land deal – that they could usually get what they want in exchange for giving a poor, tribal chief a bottle of Johnny Walker.”

I suppose that some good could come from all of this. Clearly there is going to be a very big push for agribusiness in Africa in the coming years. This would suggest that a new food supply is coming to a hungry world. It also suggests that there are going to be jobs and opportunity in the countries involved. I doubt that this will happen in the way the land grabbers are thinking. I’m sure that the likes of Tony Blair and Bruce Rastetter will do just fine, but the pensioners and LP interest are going to get clobbered when history repeats itself in Africa. At some point the locals are going to say “No”.  At $2 an acre and a tax holiday to boot I wouldn’t blame them. 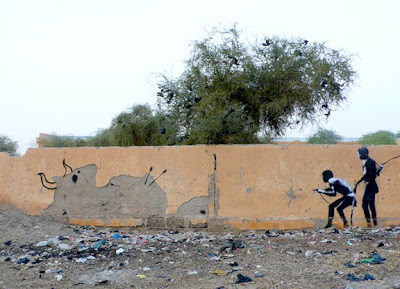