Back to Ike. The joke's on us.

After making a few jokes the President went on to defend his budget at his talk today. He said that if his budget were enacted it would result in the US achieving the lowest debt to GDP ratio since Eisenhower. That’s quite a claim. I don’t think there is any truth to it. I don’t believe Obama really believes that is the case either. He's just blowing political smoke.

The budget that “produces” these great results is actually built on sand. The assumptions that result in the dramatic improvement the President is counting on are not going to happen. Therefore we are in for a disappointment.

The CBO produced a set of slides last week that describe the economic fundamentals that are behind the magic the President is selling: 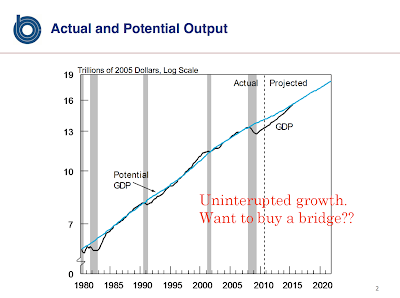 The key assumption is that GDP is onward and upward every year for the next ten. Forget the structural weakness(s) that makes this most unlikely. Forget that the US has a recession of some form or another every five years or so. If this completely Goldilocks outcome is the future then the Prez is right. We have nothing to worry about. The problem is that this scenario is the least likely outcome. 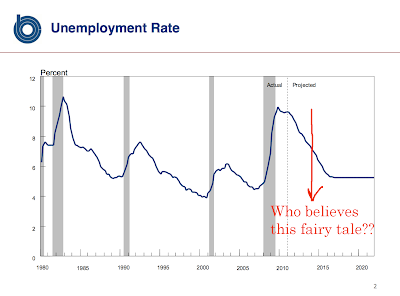 This graph stinks to me. Somewhere around tomorrow (or the next day) unemployment is going to plunge according to this. It will fall in just a year or two from now to a level not seen in history. And it will stay at that “perfect” level for, well, for ever. Give me a break! 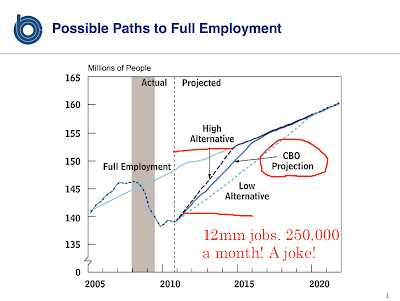 This shows the rate of jobs creation. A hockey stick is what it is called in finance. And financial guys know whenever someone shows them a plan like this, you just look the other way on the deal being offered. Hockey sticks never come true. Those that bank that they will, are always the losers. In this case that means the public. 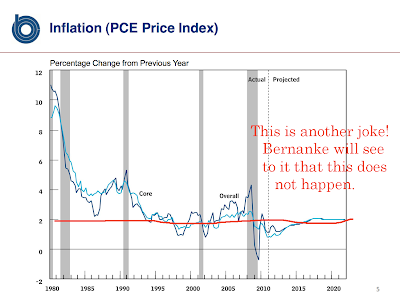 Sub 2% inflation. Forever. The lowest rate on the charts. No wonder the president’s budget looks so “good”. His core assumption is that the rising cost of government will be tame. If you build a house on this assumption, your house will fall down. 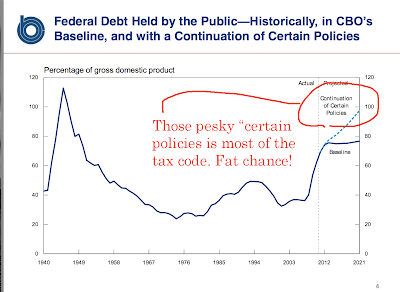 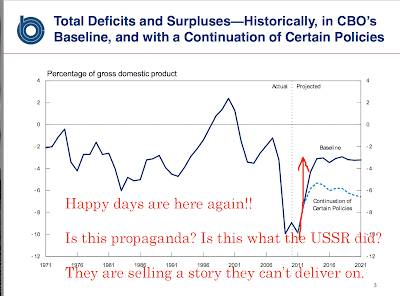 These final charts look at that phony “Baseline”. Even the CBO admits that in order to achieve that baseline some big changes must be made. If we don’t, we end up on that lighter blue line. So what are these pesky things that are referred to as “certain policies”? The answer is: (I) All of the Bush tax cuts get reversed. (II) AMT is indexed (major tax increase on all income over $75,000). (III) Deductibility for all types of things (mortgage interest, property tax, state income tax) is eliminated.

These things will not happen. If they did we would have the longest running recession in history as a result. The budget deficit would be north of 10% forever if we did that. And the CBO, OMB and the President all know that.

No wonder the big O was cracking jokes. It’s a good strategy. It gets the audience distracted from the facts. 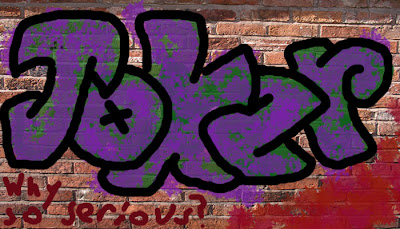