A Bad Case of Economic Hypochondria? 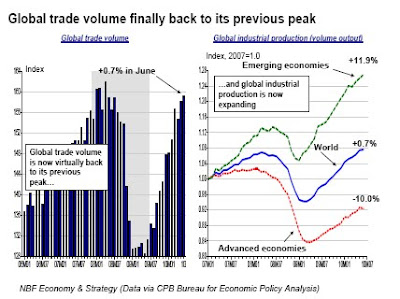 Following my latest post on whether the Fed has defused the neutron bomb, a senior pension fund manager sent me a link to AXA Investment Managers' latest weekly comment by Eric Chaney, Deflation may have won a battle, but not the war.

It is an excellent read which demonstrates why any discussion on the inflation/deflation debate that doesn't take into account what's going on outside the US is missing the bigger picture. I quote the following:

Although contemporaneous estimates of output gaps are somewhat elusive, the broad picture is clear: a growing portion of the global economy is facing inflation risks and the bulk of developed economies is no longer in the deflation danger zone. This uneven dynamic distribution matters a lot for investors, who need to make up their mind about inflation. One key lesson from the past cycle is that price movements have a larger common component than in previous times; call it the globalisation factor. Matteo Ciccarelli and Benoît Mojon estimated that “(inflation rates of) OECD countries have a common factor that alone accounts for nearly 70% of their variance” (ECB working paper, October 2005), a finding that is consistent with later research by Haroon Mumtaz and Paolo Surico (Bank of England working paper, February 2008). In such a world, the fact that China, India and Brazil have entered into the inflation risk zone matters more than Spain, Ireland and Greece being on the brink of deflation.

In sum, there is no evidence that deflation has gained much ground during the summer. For sure, a double dip of the US economy would tick a few boxes in the deflation camp. Yet the most likely scenario in our view is that the US has embarked on a slow growth cycle, the mirror image of the artificially debt-fuelled previous decade, rather than on a stop-and-go cycle. Once the markets get a clearer picture of business cycle developments, which may unfortunately take several months, there are good reasons to believe that the current deflation buzz will be quickly replaced by its opposite. In the meantime, enjoy the bond rally!

There are other encouraging signs suggesting that the global recovery is back on track. This past week, the CPB Netherlands Bureau for Economic Policy Analysis released its World Trade Monitor for June 2010, showing that world trade was up 0.7% month on month after an upwardly revised 2.3% increase in May.

Why is this significant? Because, as Yanick Desnoyers, Assistant Chief Economist at the National Bank of Canada discusses below, Global trade volume finally back to its previous peak:

According to CPB Netherlands Bureau for Economic Policy Analysis, the volume of world trade grew 0.7% in June after an upwardly revised 2.3% gain in May. This represents the ninth increase in ten months. Global trade volume is now expanding at a 21.2% growth on twelve month basis, just shy of the 23% peak registered in May. In the second quarter as a whole, global volume trade was up a significant 15.3%. As today’s hot chart shows (click on char above), it took only about a year for world trade volume to virtually get back to its previous peak.

On the global industrial output side, the index is already in an expansion mode with a 0.7% gain above its previous peak, despite the fact that IP is still down 10% in advanced economies. After all, it seems that fears of sovereign debt contagion from the Euro zone earlier in the spring did not have a material impact on global trade volume. Despite an upcoming slowdown in the U.S., we are still forecasting an above 4% global GDP growth in 2010.

What this tells you is that this cycle is different than previous cycles because the emerging economies are the source of growth. Too many analysts are focused solely on what is going on in the US and other developed economies. I too had written about Galton's fallacy and the myth of decoupling, but maybe this view needs to be revisited.

And even in the US, I tend to think there is way too much gloom & doom, a point underscored by Ross DeVol, executive director of economic research at the Milken Institute, who wrote an op-ed in the WSJ this past week, The Case for Economic Optimism:

Gloom and doom is the hallmark of the current economic debate, as the most recent congressional testimony from Federal Reserve Chairman Ben Bernanke demonstrates. Despite Mr. Bernanke's generally upbeat message on the Fed's official forecast, which calls for moderate economic growth of somewhere between 3.0% to 3.5% this year, the market and the media fixated on his acknowledgment that the outlook was "unusually uncertain." Those words have only reverberated in the past few weeks, bolstering economic pessimists.

There's a point at which pessimism becomes a self-fulfilling prophesy, scaring businesses away from investing or hiring. The dark tone of today's discourse is at risk of doing just that.

The Milken Institute's new study, "From Recession to Recovery: Analyzing America's Return to Growth" is based on extensive and dispassionate econometric analysis. It concludes that the U.S. economy remains more flexible and resilient—and has more underlying momentum—than is generally acknowledged. In fact, our projections show cause for measured optimism: A return to modest but sustainable growth is close at hand.

In this pessimistic climate, this forecast will likely be considered contrarian. So why is our economic outlook more sanguine than the current consensus? For one, robust (albeit moderating) economic growth in developing countries, particularly in Asia, will provide support for U.S. exports. Look no further than Caterpillar, which reported a doubling of its earnings in the second quarter of 2010 and whose product line is sold out for the rest of the year.

Improved business confidence is already spurring strong investment in equipment and software. Record-low U.S. long-term interest rates are supporting the recovery. And the benign inflationary environment allows the Fed to keep short-term interest rates near zero until late this year, or even into 2011 if it desires.

Historical context offers further reason to expect a rebound. The peak-to-trough decline in real GDP during this recession was 4.1%, making it the most severe downturn since World War II. But throughout the postwar period, the rate of economic recovery from past recessions has been proportional to the depth of the decline experienced. While this relationship has been somewhat variable, it is well-established. Our projections for GDP growth are above consensus but are substantially below a normal rate of recovery after a recession of this severity.

The naysayers are right that there's a "new normal" economy, but it's not that the potential long-term growth rate of the U.S. is substantially diminished, as they say. It's that this time, the fulfillment of pent-up demand will be subdued because consumers were living so far above their means during the bubble years. Nevertheless, consumer durables and business investment in equipment will see some previously postponed purchases finally happen—if not this year, certainly by 2011 and 2012.

What needs to happen on the policy front in order to build momentum?

In the first place, small businesses need access to more bank credit to create jobs. Banks feel conflicted by calls from the Obama administration to increase lending while regulators are instructing them to add to their reserves. Regulators need to be reminded that some risk is necessary in a market economy.

The White House also should press Congress to pass legislation modernizing Cold War–era restrictions on exports of technology products and services that are already commercially available from our allies. This would boost U.S. exports and reduce the deficit. And if the White House is serious about doubling exports by 2015, it needs to push trade deals with South Korea, Colombia and Costa Rica through Congress.

For its part, Congress must move immediately to restore the lapsed R&D tax credit. Even better, it should expand the credit and make it permanent.

Congress also should pass legislation to temporarily extend the Bush tax cuts that are set to expire at the end of this year. It's important not to remove any economic stimulus as long as the sustainability of the recovery is in question.

Another must-do: by 2012, Congress needs a credible long-term plan in place to reduce the deficit. If it doesn't, international financial markets might force our hand by demanding a higher rate of return on U.S. Treasurys.

Washington has to focus like a laser on helping businesses create jobs, while the rest of us should avoid talking ourselves out of a recovery by dwelling on the doom and gloom. The U.S. economy has already adapted to serious imbalances in record time: There's ample reason to believe in its dynamism in the months and years ahead.

While US consumers were living beyond their means, they're paying down debts fast. The amount consumers owed on their credit cards in this year's second quarter dropped to the lowest level in more than eight years as cardholders continued to pay off balances in the uncertain economy.

Moreover, the FT reports that US credit-card losses are falling faster than expected, with the six largest card issuers expected to earn nearly $10bn more in the coming 12 months than predicted, says a study by Moody's:

Historically, US credit-card write-offs have tracked the unemployment rate. But for the first time in a decade, loans considered uncollectible by lenders are falling faster than the jobless rate, prompting analysts to revise earnings models.

The divergence from past experience reflects bank efforts to weed out risky borrowers, moves by consumers to pare back debts after the excesses of the past decade and new credit card rules intended to discourage reckless lending.

“We are getting back to an old-fashioned basis of lending, providing credit only to people who have the ability to repay,” said Curt Beaudouin, an analyst at Moody’s.

Finally, while everyone is focused on weakness in the job and housing market, listen to Brian Wesbury of First Trust Advisors below who thinks the US economy is fine and that the country's just suffering from a case of what he calls "economic hypochondria."

Wesbury blames stimulus for delaying the recovery, which is arguable, and his assertion that the economy is "fine" is ridiculous, but I think he's right on upward pressure on growth, expecting the economy to accelerate over the next year.