I looked at the Best Buy (BBY) Black Friday ads and compared them to last year's. The prices were about the same. One thing I thought was worth noting. Look how they stretched the interest free financing period: 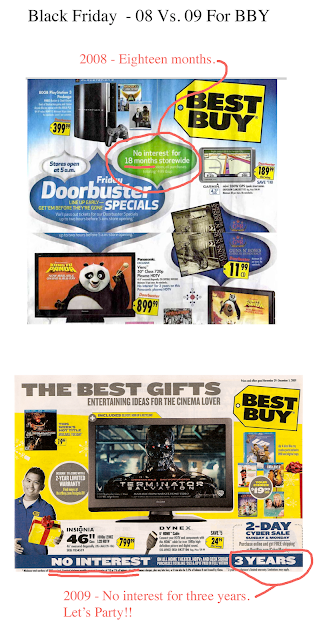 The folks at BBY know their business and they are good marketers. They understand that American consumers who see a chance to “borrow at no cost” just can’t resist. For BBY to double the term of interest free financing to three years is just an effort to increase top line sales. I am sure that it will work.

BBY has a $17 b market cap and a good balance sheet so it can take advantage of the near zero cost money that is around today. For them to provide their customers with this free financing means a cost of 2% of sales. Given their gross margins, that is an easy price to pay.

This is an example of the “Carry Trade”. We normally think of this in purely financial transactions. The Aussie Dollar carry trade is an example that comes to mind. However, the BBY example is just as much of a carry trade as anything one might do with the Australian dollar and the derivatives market.

When the cost and availability of debt capital are such that one can borrow money and simultaneously invest it and be assured an economic gain, then the conditions for a Carry Trade have been met. Of course we have not gotten to the point of alchemy, but we are getting close.

On ABC’s "This Week" show there were some interesting thoughts from Paul Krugman. He remarked: 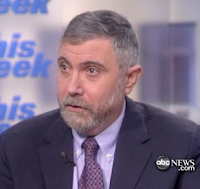 “The cost of the deficit is only 1.2% real rate of interest at the Federal level.”

This is economic speak. What Mr. Krugman was saying is that the Government can borrow long term at 3.2% and inflation is 2% so the real cost of debt is only 1.2%.

In response, George Will made the point: 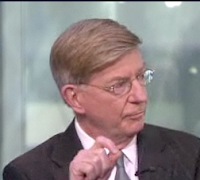 "In ten years the interest cost of servicing the debt will go to $700 billion per year!"

Mr. Krugman believes in the ultimate carry trade. His view is that growth will come from affordable (cheap) debt capital. He thinks that the US can go to 100% Debt/GDP without upsetting the applecart. I think he is dead wrong.

We are at the point where the laws of big numbers start to come into play. For Mr. Krugman’ view to work out we would have to successfully sell an additional $900 billion of debt each year for the next decade. I think that is an impossible task. But what is truly impossible is that that amount of debt can be sold without an increase in the 1.2% after inflation cost of the debt that Mr. Krugman is relying upon. You can just fool so many bondholders for so long before they look elsewhere.

The cost of servicing our debt will likely double. The increase will be a combination of a general rise in interest rates and in increase in the “spread” that the US will have to pay. If debt expense was a modest 6% it would put the cost at $1.2 trillion. I don’t think we will get to that level. We will blow up first.

The Carry Trade is fraught with risk. You can lose six months of positive carry in A$ in just one day in the FX market. Best Buy can create sales from free money, but what credit losses will they incur in the process?

Mr. Krugman’s comments are an endorsement of a policy that is in pencil already ‘out there’. We are going to double the size of the Federal debt in the next ten years.

If the A$ moves against you, you can cut the position in a phone call. If capital cost were to rise, Best Buy would shorten its interest free period to one year, or just eliminate it. But the carry trade that the US is on can’t be reversed. It’s too big.

Who on this list is going to speak for the $9 trillion of paper that is coming?

-Social Security –They will be sellers long before ten years

-Russia/Venezuela/Brazil/OPEC – Don’t count on it.

-US Public-Maybe, but not at the cost Mr. Krugman hopes for.

-The Federal Reserve-Their 1.4Trillion of Agency buys and some of the Treasury debt will mature in the ten years. On a net supply/demand basis this is the equivalent of them being sellers.

If Mr. Krugman is relying on the Fed to keep debt cost low by continuing to purchase what Treasury offers, he is wrong. The fallacy of that thinking is becoming exposed as the price of gold rises.