Big number due out on Friday morning. The 4th Q GDP is coming and it most likely will move the markets. The consensus read is for a big up number. Last I heard the Street estimate was for up 4.7%, more than double the annual rate of growth for the 3rd Q.

My own read of the numbers is for a slightly smaller number. Something a tad over 4% is my guess. But this number is not so easy to get right. Even worse, it will be revised a few times before we really know what happened. I look at this number and try to anticipate how the market will react if we get a surprise versus the consensus.

This number has potential to cause a stir if it comes in south of 4% or north of 5%. The numbers in the middle are ‘baked in the cake’.

-Stocks will fall.
-Bonds prices will rise.
-Gold will rise.
-The dollar will fall.
-A number of economists will be scratching their heads.
-There will be renewed talk of a ‘double dip, starting sometime in the 4th Q.
-Larry Kudlow will misread the number and will hail the day as a triumph of capitalism and the free market economy.
-The White House will make a statement that they are responsible for the turn-around.

If the number comes in at 5% (or higher) I think the following happens:

-Stocks will rise.
-Bonds will get crushed.
-Gold will be steady.
-The dollar will be steady.
-A number of economists will be scratching their heads.
-There will be talk of the economy over-heating; some will express concerns over inflation.
-Larry Kudlow will hail the day as a triumph of capitalism and the free market economy.
-The White House will make a statement that they are responsible for the turn-around.

I think a graph of the actual GDP numbers is helpful in trying to understand these big numbers. Note: The 4th Q number is a forecast based on the consensus estimate. 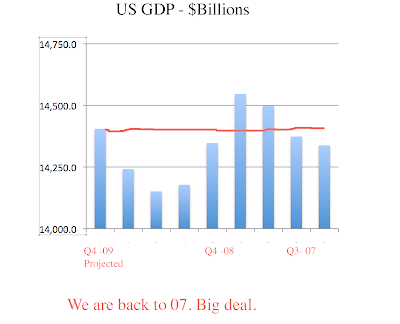 While I will be happy to see a big number tomorrow, you have to look at where we have come and where we are. Looking at this you see that the growth in the economy is about where we were two years ago. What did we pay to get back to 07? About $2 trillion in additional debt, the socialization of the financial system and the expectation for trillion dollar deficits as far as the eye can see.

A hypothetical question to ask might be, “What would we look like today if we had not had a train wreck in 08”. Another graph: 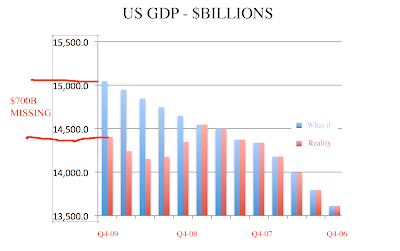 Of course we did have a wreck in 08, so it is sort of useless to play the game of “if coulda shoulda “. However there are hundreds of programs, retirement plans and dreams that are off track as a result. We will not catch up to where we might have been. We need to adjust to where we are, I can’t imagine how that can happen.

Some on the Street are putting 4Q GDP north of 5%. If we see a number with a five handle, take note of it. It will be the last time we see one that big for a long time.