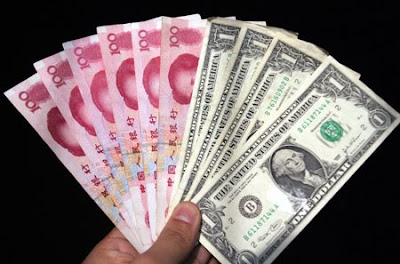 A follow-up to my last comment on the death-defying dollar. In his NYT op-ed column, Paul Krugman writes about The Chinese Disconnect and notes the following:

Many economists, myself included, believe that China’s asset-buying spree helped inflate the housing bubble, setting the stage for the global financial crisis. But China’s insistence on keeping the yuan/dollar rate fixed, even when the dollar declines, may be doing even more harm now.

Although there has been a lot of doomsaying about the falling dollar, that decline is actually both natural and desirable. America needs a weaker dollar to help reduce its trade deficit, and it’s getting that weaker dollar as nervous investors, who flocked into the presumed safety of U.S. debt at the peak of the crisis, have started putting their money to work elsewhere.

But China has been keeping its currency pegged to the dollar — which means that a country with a huge trade surplus and a rapidly recovering economy, a country whose currency should be rising in value, is in effect engineering a large devaluation instead.

And that’s a particularly bad thing to do at a time when the world economy remains deeply depressed due to inadequate overall demand. By pursuing a weak-currency policy, China is siphoning some of that inadequate demand away from other nations, which is hurting growth almost everywhere. The biggest victims, by the way, are probably workers in other poor countries. In normal times, I’d be among the first to reject claims that China is stealing other peoples’ jobs, but right now it’s the simple truth.

So what are we going to do?

U.S. officials have been extremely cautious about confronting the China problem, to such an extent that last week the Treasury Department, while expressing “concerns,” certified in a required report to Congress that China is not — repeat not — manipulating its currency. They’re kidding, right?

The thing is, right now this caution makes little sense. Suppose the Chinese were to do what Wall Street and Washington seem to fear and start selling some of their dollar hoard. Under current conditions, this would actually help the U.S. economy by making our exports more competitive.

In fact, some countries, most notably Switzerland, have been trying to support their economies by selling their own currencies on the foreign exchange market. The United States, mainly for diplomatic reasons, can’t do this; but if the Chinese decide to do it on our behalf, we should send them a thank-you note.

The point is that with the world economy still in a precarious state, beggar-thy-neighbor policies by major players can’t be tolerated. Something must be done about China’s currency.

Krugman's article prompted this response by Zachary Karabell on the Huffington Post:

But what exactly must be done? And more to the point, what can be? Declaiming that something must be done assumes that the United States or some other world power can coerce or force the Chinese government to change their approach to currency in particular and economic policy in general. Before the crisis of the past year, Chinese authorities had actually begun a slow, quiet revaluation of the currency, but only after American politicians and officials stopped using the currency question as a cudgel against China. The recent decision of Timothy Geithner and the Obama Administration not to label China a currency manipulator marked a welcome change in tactics. Compare that choice to the much-publicized Schumer-Graham tariff of 27.5%. It never went into effect, but it hovered as a threat that if China didn't immediately revalue its currency, dire things would follow.

But with China now accounting for nearly $1 trillion of American debt, and with the two economies in a symbiotic relationship that neither loves but that neither can escape, the U.S. can't simply insist that China do something about its currency and expect action. These economies are now fused (see my new book Superfusion). Much like the United States for last half of the 20th century, China is becoming a global economic behemoth. It isn't supplanting the United States anytime soon, but it is rapidly joining the U.S. as the other most important engine of the global system. It remains much poorer and less developed, but it is generating a substantial share of global activity and its cascade can be felt from Rio to Melbourne.

Given that, why would China decide to disrupt the system simply because it causes consternation in America or Europe? Its economy is booming and its policies, however unorthodox, are working. China will again allow its currency to appreciate when it feels that doing so won't cause a crisis of disrupt growth. Its massive accumulation of reserves is an issue. As the crisis eases, it's likely that Beijing will return to its pre-2008 policy of gradual appreciation, especially now that it is focusing on generating domestic demand and wants greater purchasing power for Chinese citizens. But Secretary Geithner - contrary to the criticisms of Krugman and others - has been exactly right in not publicly calling out China. Such an act would be both arrogant and foolish. In the world today, the United States can afford to be neither. Let's hope we remember that.

Writing for the WSJ's China Real Time Report, Jason Dean reports that the yuan may rise later rather than sooner:

Predicting the government’s handling of the exchange rate has generally proven a fool’s errand: Analysts were saying a de-pegging was imminent for years before it finally happened in 2005, and few foresaw the re-pegging last year.

The yuan bulls may well be right - there are many strong arguments for appreciation.

But the difficulties involved for Beijing haven’t disappeared, either. Does it go fast or slow? The gradual-but-seemingly-inexorable rise from July 2005 to July 2008 drew a flood of speculative hot money into the economy – which China’s leaders hated. A rapid, one-time jump could catch speculators off guard – but also shock domestic companies and disrupt the economy, which Beijing would hate even more.

It’s also worth remembering the circumstances last year when the re-pegging occurred. True, China’s export growth had slowed a bit in some months, but exports rose a blistering 27% in July 2008, and continued to grow by around 20% for three more months. GDP grew 10.1% in the second quarter. It wasn’t till September that the People’s Bank of China started cutting interest rates, and Beijing didn’t truly go into crisis mode till November – the month exports started falling for the first time in years, and China unveiled its monster 4 trillion yuan stimulus package.

If China put the brakes on the yuan’s rise well before the real crisis hit, it could be a while after the crisis disappears before it taps the gas again.

Stephen Green, China economist for Standard Chartered, said in a note last month that exports will need to be growing at a double-digit rate before the yuan is allowed to resume its rise. He doesn’t think the exchange rate will start to budge until the second half of next year – and projects a move of less than 1% between now and the end of 2010.

Finally, Chrystia Freeland, US managing editor of the Financial Times interviewed George Soros about the state of the world economy. It is an excellent interview, worth reading in its entirety (you can also watch it by clicking here). Here is what Mr. Soros had to say about the U.S. dollar and China's peg:

FT: Given this continued weakness in the US economy, are people right to start to be concerned about the dollar?

GS: Well, they are of course and the dollar is a very weak currency except for all the others. So there is a general lack of confidence in currencies and a move away from currencies into real assets. The Chinese are continuing to run a big trade surplus and they're still accumulating assets and basically the renminbi is permanently undervalued because it's tied to the dollar. There is a diversification from assets that are normally held by central banks into other assets, especially in the area of commodities. So there is a push in gold, there's a strength in oil, and that is in a way a flight from currencies.

FT: Is there going to be a tipping point, a moment at which the dollar is fatally weakened? Or does it just sort of carry on?

GS: As long as the renminbi is tied to the dollar, I don't see how the decline in the dollar can go too far. Now, of course, to some extent it's very helpful because with the US consumers saving more and spending less, exports can be way for the US economy to be balanced. So, an orderly decline of the dollar is actually desirable.

An orderly decline of the dollar? We've already seen a steep decline in the U.S. dollar. The big question is how will other nations respond to the symbiotic relationship between the U.S. and China? This week we saw Asian currencies declining on intervention speculation. Will we see intervention in the currency markets? I am not sure, but the current path is unsustainable and will require some sort of intervention as it poses serious risks to the global recovery.