Chinese Yuan: Bent But Not Bowed

The currency issue has been a constant tension in relations between the United States and China. Many analysts had expected the Chinese central bank to announce a one-off revaluation in the yuan to appease critics of the exchange rate policy.

However, on Sunday, the People's Bank of China (PBOC) has ruled out the one-off revaluation that US politicians had sought. This was seen as a largely political move to deflect criticism of its fixed exchange rate ahead of the G20 meeting next week.

For now, Analysts still expect the yuan to slowly rise. Meanwhile, the decision should not have come as a surprise as there are several major risks (discussed below) should China implement a faster yuan move as favored by many.

China allowed the yuan to rise by about 20% beginning in 2005, but halted two years ago to help Chinese manufacturers weather the global financial crisis. Since then, the yuan's value has been pegged to the dollar at an exchange rate of roughly 6.83 to $1. (Chart 1) 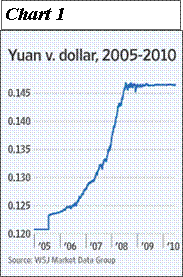 Many Western economists estimate the yuan is still undervalued by 25% to 40%. International pressure has been growing this year for China to end the linkage, because it tends to make Chinese exports cheaper, and is seen as giving them an unfair advantage in global markets.

China has long resisted pressures on yuan revaluation as China is still largely dependent on its export to deliver growth. Some government officials have warned that any further appreciation of the Chinese currency risked driving exporters out of business. .

Data showed that Chinese exports leapt 48.5% in May on a year-on-year basis, widening China's trade surplus to $19.53 billion in May. But officials said the profit margin on many Chinese export goods was less than 2%. 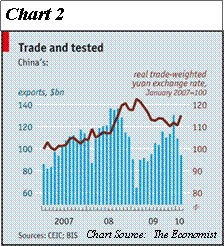 The Economist also noted that several studies suggest that China’s exports would fall by about 1.5% when its trade-weighted exchange rate, adjusted for inflation, strengthens by 1% (Chart 2). However, The Economist argues that at the same time, the currencies of China’s neighbors and rivals might rise thus limiting the damage to its competitiveness.

Separately, the Council on Foreign Relations (CFR) cited a study by China International Capital Corporation (CICC) evaluating the effect of a hypothetical 5% increase in the value of the RMB against the dollar. The study found that most manufacturing sectors’ profitability actually increased with cost savings from cheaper imports offsetting decreases in revenue. (Chart 3) 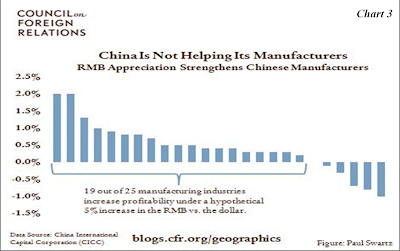 Last year, China spent $89 billion on oil imports, $50 billion on iron ore and $29 billion on copper. A 3% increase in yuan could save Beijing $5 billion on those materials.

Nevertheless, decreases in revenue suggest reduced employment, which is a tall risk Chinese officials appear unwilling to accept given the ongoing labor unrest.

According to statistics compiled by CFR in March, China’s foreign assets grew at a slower rate during the crisis, but the growth rate is accelerating again. China’s total foreign assets, valued at 2.7 trillion dollars, are nearly three times the combined value of reserves held by --Russia, India, and Brazil-- the other three in BRIC. (Chart 4) 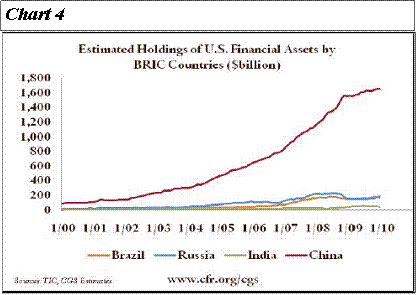 There is a huge risk of large losses in national wealth as China’s reserves make up 50% of GDP. This risk will become apparent as and when China allows the yuan to appreciate driving down the value of China's foreign exchange reserves.

China was sending signals for the world not to expect a dramatic increase in the yuan. The PBOC said it will still retain the yuan's 0.5% daily trading band with daily reference rates to slowly guide its exchange rate against the US dollar higher.

Economists say this is similar to the policy that was followed for three years until the start of the credit crunch in mid-2008. The yuan appreciated by 21% against the dollar during that time.

The PBOC statement also implied that China considers the current exchange rate to be roughly in equilibrium, and economists said they don't anticipate big swings in the yuan's value.

However, it most likely will not satisfy U.S. politicians who do not want to be seen as weak on China before the congressional elections in November.  Many lawmakers are already pressing the Commerce Department to begin slapping countervailing duties on some Chinese goods even without new legislation.

Rather, "[The concession] will allow both China and the U.S. to cool off before either side does something to precipitate a trade war," as remarked by Raghuram Rajan, economics professor at the University of Chicago and former chief economist at the International Monetary Fund (IMF).

Self Prosperity vs. Global Imbalance

In reality, as indicated by the IMF, world leaders would do better to worry more about whether their own nations are pursuing policies that contribute to global prosperity.  In the U.S. and Europe, that means a major policy shift toward spending restraint, lower taxes, freer trade and less political control of business.