United States Oil Fund (USO) was a big mover on Friday jumping 3.69% to $35.65, outperforming other ETFs. The fund was trading in the negative territory for the most part in the morning, but spiked up around 11:45 EST, and kept the momentum through closing. (Chart 1) 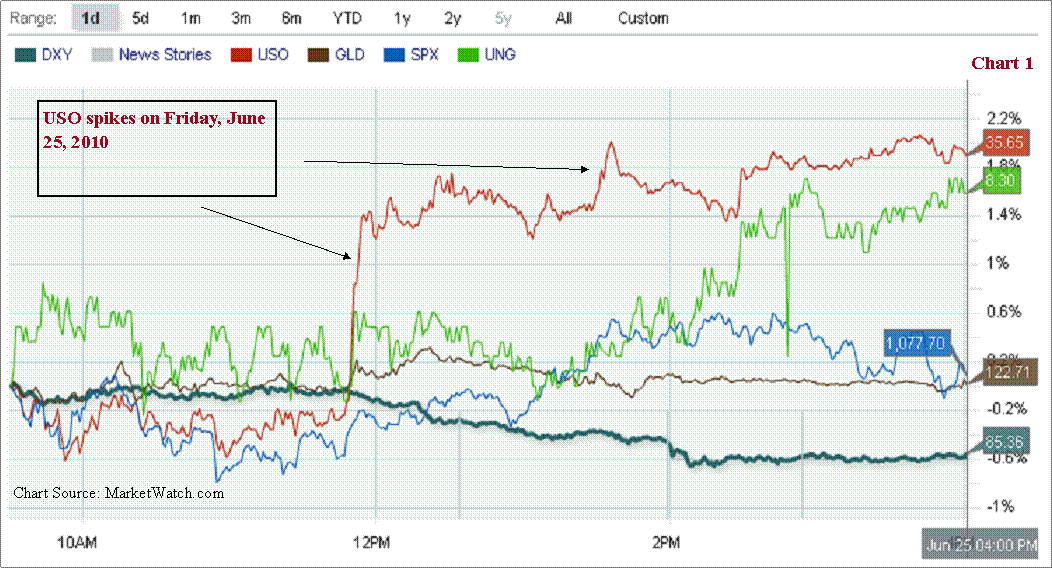 Curious Move On a Friday

Some of the sharp move could be attributed to crude oil and the Dollar.

Crude oil moved higher as well on Friday, up 3.07% to $78.86, partly on concerns over a possible tropical storm hitting the Gulf of Mexico.

Meanwhile, dollar was moving lower on weaker U.S. GDP release, coupled with the recent slew of softer data on jobs and housing.

Typically, a declining dollar would prompt a flight to gold as the ultimate dollar hedge. But USO managed to outperform the SPDR Gold Trust (GLD), which was up 1.2%, as well as the United Natural Gas Fund (UNG), up 2.97%. (Chart 1)

Friday is usually a light trading day as traders take profits off the table unwilling to risk long positions into the weekend. So, this move on crude, the dollar and USO caught some traders off guard.

Of course, one could very well argue that one day does not make it a trend. Nevertheless, it seems to suggest some dollar unwinding, as markets are beginning to reassess the dollar risk ahead of the G8 and G20 meetings -- the still loose deficit spending of the U.S. vs. austerity measures in Europe and the monetary tightening in China.

This trend is evident in the dollar chart.  For the week, the dollar index has slipped for a third week, particularly against the euro, while commodities and equities seem to have reacquainted the historical inverse relationship with the dollar.  (Chart 2) 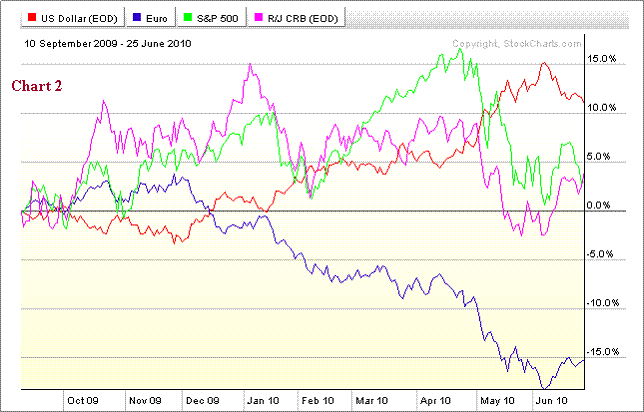 Another suggestion is that since gold has had a nice run-up, while natural gas has relatively poor medium-term fundamentals, certain players could view crude oil, along with USO fund, as better investments, relative to gold and natural gas, at the moment.

Back in February, Bloomberg reported that China’s sovereign wealth fund--China Investment Corp.--invested for the first time in the U.S. Oil Fund (USO) and became the fourth-largest holder with a value of $78.6 million.

Chesapeake Energy (CHK) also announced this week it has sold US$900 million in preferred stock to sovereign wealth funds from China, Singapore, South Korea, Abu Dhabi, as well as two private-equity firms, as reported by The Wall Street Journal.

The BP Gulf disaster most likely will increase investor interest in onshore energy and natural gas. So, conceivably, sovereign funds would continue to look at commodity investment vehicles such as UNG and USO for diversification, as well as a hedge against their massive dollar holdings.

While I don’t typically recommend futures-based ETFs due to the rolling effect, for investors who are still interested, the following is a technical take on U.S. Oil Fund (USO). (Chart 3) 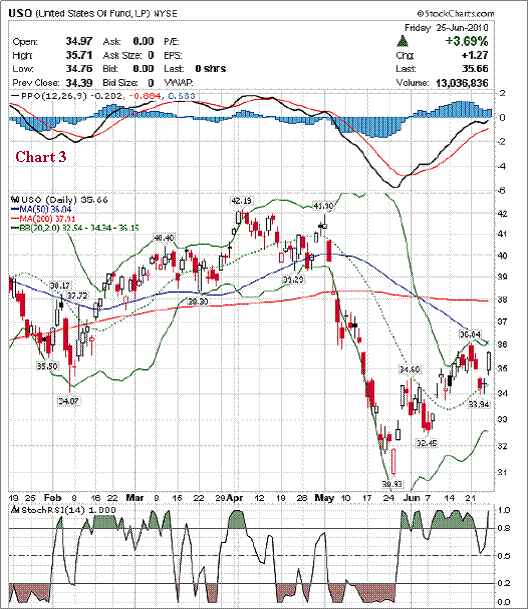 USO shares were trading in the bearish territory for quite a while. The next few trading sessions should decide if the momentum from Friday would hold to a definitive breakout.

Near Term Indicator – The U.S. Dollar

In the near term, markets—commodity and equity—most likely will look to the dollar and macro indicators for direction, which is something investors should also keep a close watch on.