Over the past month or so, world`s focus, currency markets in particular, has been centered mainly on the U.S. over QE2, the November elections, and the Job`s Report. As such, there have been some interesting headlines coming out of Europe that went quietly under the radar as Wall Street became infatuated with their own bullish sentiment.

Now, with QE2 and mid-term election pretty much behind us, guess where the market’s attention will shift to next?

The euro, which has been strengthening across the board for a while, was noticeably weaker last week considering the bullish sentiment, which really bolsters the European currency during ebullient US and world market breakout moves to the upside.

There were also telltale clues from the press conference of ECB President Jean-Claude Trichet last Thursday after ECB’s decision to leave interest rates unchanged. The press conference was filled with numerous questions regarding the record high Irish bond spread, and the ever widening bond spread of the other highly indebted EU members--Greece, Spain and Portugal.

That basically telegraphed the European debt crisis will start to take center stage once again.

Sure enough, on Monday, the Portuguese and Irish government bond spread hit their highest in the euro's lifetime with Irish 10-year bond and the German Bund widened to 557 basis points while the Portuguese 10-year versus the Bund expanded to 450 bps. (see Bond Yield Chart) 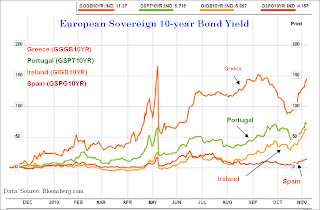 In fact, the bond interest rate of Ireland, Portugal and Spain, have been rising ever since German Chancellor Angela Merkel said any future EU bailouts is expected to come with new rules requiring bondholders to absorb some losses, which was further elaborated by German Finance Minister Wolfgang Schaeuble in a an interview with Der Spiegel.

Meanwhile, Greek bond had a little rally after the election poll, but that does not alter its ominous overall debt picture. Nevertheless, Greece is pretty much old news, and now it’s Ireland's and Portugal's turn to take a beating from the widespread investors skepticism.

Market players expect Portugal to issue up to 1.25 billion euros of five and ten-year bonds this week, while Ireland says it has sufficient cash until mid-2011 (such reassurance to bond buyers) and plans to resume bond auctions in January.

But with ECB seemingly the only major buyer of European bonds in recent weeks, and at such high yield levels, investors pretty much bet on both countries will eventually join Greece for a bailout by the EU and International Monetary Fund (IMF).

Head of the Debt Class

Of course, fresh deficit figures from Eurostat last month only add to the pessimism. According to Eurostat, Ireland’s budget deficit was the highest among EU members at 14.4 percent of GDP last year, ahead of Spain at 11.1 percent and Portugal at 9.3 percent. (By the way, the UK came in second to Ireland with a deficit of 11.4 percent of GDP.)

The more eye-popping news is that Irish deficit is set to rise to an unprecedented 32 percent this year—a modern European record-- due to the one-off costs associated with the bank bailout.

The situation seems so dire that in an article in the Irish Times, the "Dr. Doom" of Ireland--University College Dublin economics Professor Morgan Kelly--concluded that

"We [Ireland] are no longer a sovereign nation in any meaningful sense of that term. From here on, for better or worse, we can only rely on the kindness of strangers."

The debt projection is even more depressing for Portugal and other EU peripheries (See Debt Projection Chart), whereas the UK debt outlook is not that rosy either. 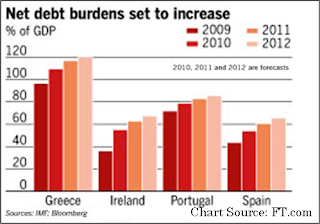 While the US is depressed over its 9.6% unemployment rate, just imagine Spain`s 20.5% unemployment rate, not to mention the slower growth prospects (see Growth Forecast Chart) due to the implementation of numerous Austerity programs throughout European Union member states. 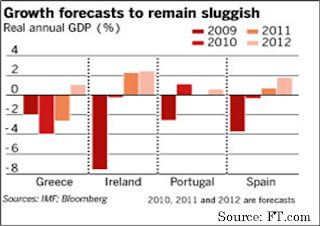 Something Bullish About The Dollar

In short, analysts may be inclined to be bearish on the US dollar due to Mr. Bernanke`s QE2 campaign. However, the European Union and namely the Euro currency may be much worse off than the US dollar, considering the US can actually still finance its debt at much lower rates right now. 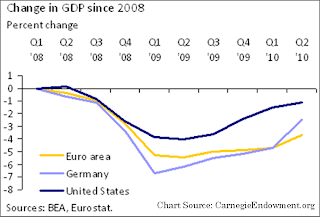 Furthermore, the US only has ONE country to manage, whereas the European Union has 27 member states with 16 utilizing the Euro as a single currency, with the high powered Germany at one end of the fiscally responsible spectrum, and lowly Greece and Ireland at the other end.  The GDP comparison chart here also bears a similar message.

After the initial reaction regarding QE2 where the euro approached 1.43 on the Eeuro/Dollar currency cross, it is now hovering just above 1.38. It seems very likely that euro could break through the 1.38 level this or next week, and head much lower to around 1.35 over the next month on European debt concerns, which will be back on the front burner as markets focus away from the US and back on Europe. 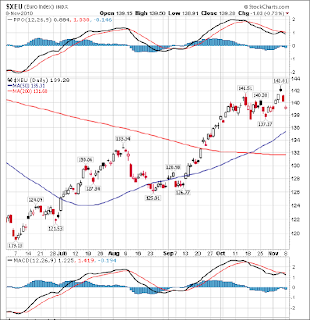 The comparison is not a favorable one from a currency evaluation standpoint. What you have is a contest where you are trying to find the proverbial dog with the least flees on it, and at these levels, I am not sure the euro is the winner in this currency contest.

Remember, just this summer the euro was trading at 1.18 against the dollar, it has come a long way in a short time, and is probably due for a correction lower to the 1.30-1.35 range over the next 6 months. (See Euro Technical Chart)