Emerald Isle and the Golden State

There is an eerie calm that has descended on the Irish story. IMF and EU folks are ‘up country’ taking a look-see and kicking some bank tires. The market for Irish debt has stabilized and the local equity index has improved at the prospect of some sort of deal that will “fix” the problem. Even the Euro has had its head lifted at the prospect.

I understand that a bailout of Ireland and Portugal is better for the markets than a crash and burn, but I am surprised at the euphoric atmosphere as we get closer to the biggest sovereign blow up in a very long time.

Speaking of sovereign blowups there is one happening in the US Muni market. There are a number of factors hitting Muni’s of late. Some are technical, some yield curve related. But there is more happening than just these things. It reminds me a bit of what happened to Ireland before they were forced to fold. Some things hanging on the market:

-Treasury long-term yields have seen a very big back up since the announcement of QE-2.

-Philadelphia and San Francisco have been downgraded. This is very “upsetting” to Muni players.

-There is uncertainty regarding what the tax brackets will be in 40 days. If you don’t know what your tax rate is it is hard to figure if you should invest in Muni’s.

-There is uncertainty regarding the Build America Now Bond program. The uncertainty (it also expires in 40 days) is adding to the anxiety in the market.

-Hamtramck, Michigan has requested permission to file bankruptcy, always upsetting. Even more upsetting is that their request has been denied. This muni has been broke for years, but rather than go bankrupt and wipe out the un-payable liabilities the plan if for a bailout. A dangerous precedent as it just puts more debt pressure at the State level.

These are all good reasons for a backup. But this has been a hell of a backup. Two listed funds in the Muni space tell a scary story. The folks who own this just gave up two years of income. 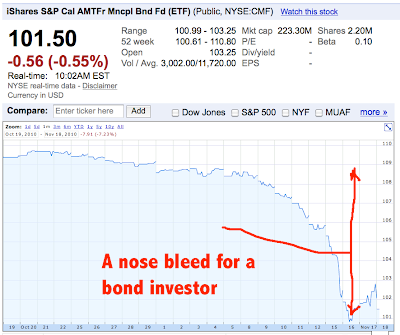 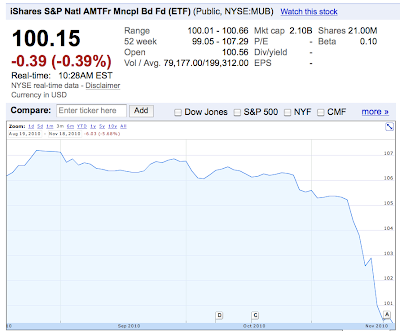 It is not just selected issues. The whole space is getting clocked, and it is happening fast: 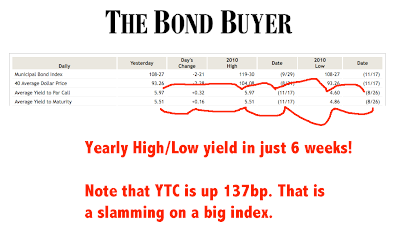 An argument can be made that Muni’s will stabilize as the regulatory/taxes issues are resolved. The supply issue is somewhat self-correcting as issuers that have no urgent financing needs are pulling deals off the calendar. But consider the muni yield curve for both California and a general price index: 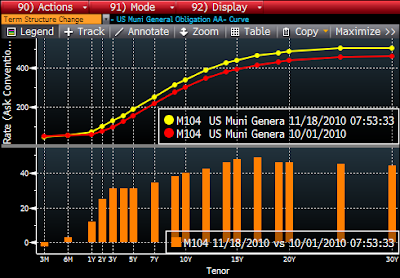 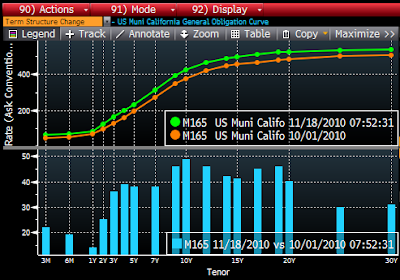 As you can see, short-term yields are near zero but rise pretty quickly in both graphs. The California index is much steeper than the general. This is a measure of too much supply and credit quality concerns. It is reasonable to expect that Cali has a steeper curve to climb. The Cali yield curve is a barometer of where the general index is headed. It is now probable that Cali will get steeper too. A guess where this is headed:

The curve for all Muni paper will get steeper. Weak credits like NY/Il/CA will see the curve steepen from two to five year maturities versus the current ten-year peak. Should this happen Muni’s will be forced to pay up big time to roll maturities. Some may face prohibitive pricing. Given that the worst and biggest borrowers have the largest populations a disruption in the financing markets for these biggies would translate into big cutbacks in employment. It is not possible for that to happen without it ripping a big hole in total GDP and pushing unemployment north of 10%.

We know we have D.C. gridlock. There will be no new stimulus program that bails out the states. A bailout that was directed to California at the expense of Texas is not going to go over at all. I would call that a non-starter. That being the case what is the only option left? Simple, the Fed buys Muni’s. Of course that would be the very last act before the cliff.

Ireland is being dragged and kicked into a bailout. The bond market forced them into it. When yields screamed to peak near the two-year (just a week ago) the jig was up. California will be no different. If the two year cost of money rises to ~80% of the 20 year yield we will have a crisis and a bailout.

I used to think that following muni pricing was like watching paint dry. No action. That may change. The steepness of the muni curve may well drive headlines and markets for a bit. I’ll be watching. 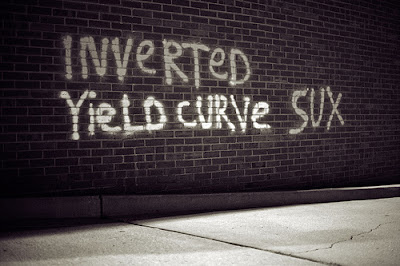