Fraud Caused the 1930s Depression and the Current Financial Crisis

Robert Shiller - one of the top housing experts in the United States - says that the mortgage fraud is a lot like the fraud which occurred during the Great Depression. As Fortune notes:

Shiller said the danger of foreclosuregate -- the scandal in which it has come to light that the biggest banks have routinely mishandled homeownership documents, putting the legality of foreclosures and related sales in doubt -- is a replay of the 1930s, when Americans lost faith that institutions such as business and government were dealing fairly.

The former chief accountant of the S.E.C., Lynn Turner, told the New York Times that fraud helped cause the Great Depression:

The amount of gimmickry and outright fraud dwarfs any period since the early 1970's, when major accounting scams like Equity Funding surfaced, and the 1920's, when rampant fraud helped cause the crash of 1929 and led to the creation of the S.E.C.

In 1932 through 1934 the Senate Banking Committee, led by its Chief Counsel Ferdinand Pecora, ferreted out the deeper fraud and corruption that led to the Crash of 1929 and the Great Depression.

The 1930s’ Pecora Commission, which investigated the fraud that led to the Great Depression ....

The original Pecora investigation documented the causes of the economic collapse that led to the Great Depression. It ... established that conflicts of interest and fraud were common among elite finance and government officials.

The Pecora investigations provided the factual basis that produced a consensus that the financial system and political allies were corrupt.

Moreover, the Glass Steagall Act was passed because of the fraudulent use of normal bank deposits for speculative invesments. As the Congressional Research Service notes:

In the Great Depression after 1929, Congress examined the mixing of the “commercial” and “investment” banking industries that occurred in the 1920s. Hearings revealed conflicts of interest and fraud in some banking institutions’ securities activities. A formidable barrier to the mixing of these activities was then set up by the Glass Steagall Act.

Economist James K. Galbraith wrote in the introduction to his father, John Kenneth Galbraith's, definitive study of the Great Depression, The Great Crash, 1929

The main relevance of The Great Crash, 1929 to the great crisis of 2008 is surely here. In both cases, the government knew what it should do. Both times, it declined to do it. In the summer of 1929 a few stern words from on high, a rise in the discount rate, a tough investigation into the pyramid schemes of the day, and the house of cards on Wall Street would have tumbled before its fall destroyed the whole economy. In 2004, the FBI warned publicly of "an epidemic of mortgage fraud." But the government did nothing, and less than nothing, delivering instead low interest rates, deregulation and clear signals that laws would not be enforced. The signals were not subtle: on one occasion the director of the Office of Thrift Supervision came to a conference with copies of the Federal Register and a chainsaw. There followed every manner of scheme to fleece the unsuspecting ....

This was fraud, perpetrated in the first instance by the government on the population, and by the rich on the poor.

The government that permits this to happen is complicit in a vast crime.

As the Great Crash, 1929 documents, there were many fraudulent schemes which occurred in the 1920s and which helped cause the Great Depression. Here's one example of a pyramid scheme in Florida real estate:

An enterprising Bostonian, Mr. Charles Ponzi, developed a subdivision “near Jacksonville.” It was approximately sixty-five miles west of the city. (In other respects Ponzi believed in good, compact neighborhoods ; he sold twenty-three lots to the acre.) In instances where the subdivision was close to town, as in the case of Manhattan Estates, which were “not more than three fourths of a mile from the prosperous and fast-growing city of Nettie,” the city, as was so of Nettie, did not exist. The congestion of traffic into the state became so severe that in the autumn of 1925 the railroads were forced to proclaim an embargo on less essential freight, which included building materials for developing the subdivisions. Values rose wonderfully. Within forty miles of Miami “inside” lots sold at from $8,000 to $20,000; waterfront lots brought from $15,000 to $25,000, and more or less bona fide seashore sites brought $20,000 to $75,000.”

This Mr. Ponzi of course is the man who gave name to the “Ponzi scheme” that many use today. He laid the groundwork for many of the criminals today in the housing industry. Yet during the boom he wasn’t seen as a criminal but a player in the Florida real estate bubble. Here’s a nice picture of the gentleman: 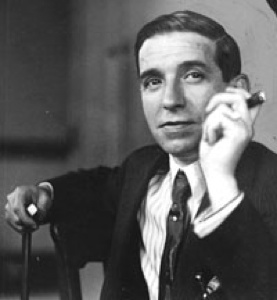 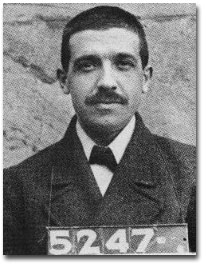 James Galbraith recently said that "at the root of the crisis we find the largest financial swindle in world history", where "counterfeit" mortgages were "laundered" by the banks.

As he has repeatedly noted, the economy will not recover until the perpetrators of the frauds which caused our current economic crisis are held accountable, so that trust can be restored. See this, this and this.

No wonder James Galbraith has said economists should move into the background, and "criminologists to the forefront."

Note 1: I asked Professor Black to comment on this essay, and he said the following:

The amount of fraud that drove the Wall Street bubble and its collapse and caused the Great Depression is contested [keep reading to see what Black means]. The Pecora investigation found widespread manipulation of earnings, conflicts of interest, and insider abuse by the nation's most elite financial leaders. John Kenneth Galbraith's work documented these abuses. Theoclassical economic accounts, however, ignore or excuse these abuses. The Justice Department did not respond effectively to the crimes that helped spark the Great Depression so we have far fewer facts available to us.

The decisive role that "accounting control frauds" played in driving the current crisis is clear. The FBI warned of an "epidemic" of mortgage fraud in 2004 and predicted that it would cause an economic crisis if it were not stopped. The mortgage lending industry's own experts reported that "liar's" loans were "an open invitation to fraudsters" and fully warranted their name -- "liar's" loans -- because fraud was endemic in such loans. Lenders and their agents led these lies. They led the lies for an excellent reason -- the strategy is a "sure thing" (Akerlof & Romer 1993 -- Looting: the Economic Underworld of Bankruptcy for Profit). It guarantees record (albeit fictional) profits, which maximize the CEO's bonuses. The same strategy for maxmizing fictional income maxmizes real losses in the longer term. When many lenders follow the same fraudulent strategy the result is a hyper-inflated bubble followed by a severe crisis.

Control fraud epidemics also produce "echo" epidemics of fraud in other fields. For example, when lenders are control frauds the CEO establishes perverse incentives ("Gresham's dynamics") that corrupt other industries and professions.

By rewarding professionals who are willing to inflate asset values, and refusing to hire honest professionals, control frauds cause the unethical to drive the ethical out of the markets. When one combines deregulation, desupervision, and the perverse incentives of modern executive and professional compensation the result is recurrent, intensifying crises.

Note 2: The Austrian economists point out that it is bubbles which cause crashes. I agree. But as Professor Black points out, fraud is one of the main things which causes bubbles.

Note 3: Of course other factors, such as excess leverage and counterproductive actions by the Federal Reserve, also contributed to the 1930s Depression and the current crisis.