Another big week in FX. The closing prices in NY Friday were on the edge of some critical levels. I see no reason why the underlying themes will not continue for a bit longer.

I have to believe that the folks at the ECB are not happy with this. The EURJPY cross is very important to the EU. The dollar rate must make them sick (and angry). The back up in the EUR/CHF is interesting. In an environment where the dollar was weak and gold was strong this move ran counter to recent trends. I see this as evidence that the “short Euro trade” was getting unwound. That hit the dollar and the Swiss cross. Market volume for all crosses was heavy all week.

There is a slow motion “run on the dollar” taking place. It is popping up in the big money centers and the small. The markets are all orderly so there is no sense of panic. But there is a non-stop movement out of dollars. One week it is into the CHF, the next to the Pound the Euro or the Yen. Some of it is going to gold and other PMs. But when I see that that Brazil, Russia and S. Korea are intervening to offset a supply of unwanted dollars I get worried.

The money is moving. Once the process starts it can get messy. October is often a time for messy things to happen.

The move against the dollar is about Ben Bernanke and his non-stop hints of QE-2. The FX market is just going through the process of adjusting to the reality that will be with us as of 11/3. More QE is coming. Bernanke has been leaking bits and pieces of his plan to the press in order to give the market a heads up on what is coming. He wants the markets to adjust to reality before it is a reality. That way he can say that the post market reaction to QE2 was muted.

One area to keep an eye on this week is the JPY. It is possible that the Yen becomes a flash point for a jump in FX volatility and an increase in the money flow. I have been looking for signs that would give us some hints on the tactics to be used by the BoJ in its intervention policy. I want to know if the BoJ is on offense or is it playing defense. If it is defense the door is open for some action that could spill some milk. There are few tea leaves to look at. Some information from the Japanese Ministry of Finance got me to thinking.

MITI has reported that the magnitude of currency intervention since September 15th was Yen 2.125T. This amount is a bit larger than the Y2T that was being discussed. MITI did not confirm it, but this number makes me believe that the BoJ did a very splashy job of publicly disclosed intervention on 9/15 and they did small amounts (that were not disclosed) on at least one other occasion. Most likely the second intervention took place on 9/24.

Consider the amount. 2.125 T. A curious number. Why such an odd amount? It could be random, the sum of the concerted intervention just happened to total to this amount. But that does not line up with Japanese precision. So I am left wondering.

It just so happens that if you take Yen 2.125T and divide it by 85.00 you get exactly $25,000,000. That is a nice round number that makes me happy. My take is that the BoJ made an internal decision to intervene for a fixed dollar amount. It was not an open-ended approach. I think someone (Shirakawa) said, “Lets buy $25b if the dollar slips below 83.” After that we will just see what happens.”

That strategy would be defense. It means the dollar will have to grind lower. I expect the next BoJ intervention to occur in a range of 81.80 and 82. After that round is digested the BoJ will drop its intervention to yet another lower level. Probably closer to 81. Should that prove to be the case it will result in some big moves in all the Yen crosses. The dollar may catch a short term bid against the Europeans if we see money flow out of EURJPY. But that will be a head fake and an opportunity to sell more dollars. If the BoJ signals that it is in an orderly retreat the net affect will be a broad move out of the dollar. I am expecting a big volume week.

If next Friday the Buck is lower across the board and the BoJ is a bit bloodied Ben Bernanke will light a cigar. That would be the script that he wants the market to follow. What Ben would like to see is an orderly retreat for the dollar of about 10%. We would be able to export some deflation to our trading partners if that were achieved. The big risk is that orderly becomes DISorderly” and some of those “partners” retaliates in some subtle way. One or the other of them might say, ”If you’re going to treat us like this we are not buying your bonds. You’ve proved they are not money good”.

What are the odds of a significant blowup in the FX market? Pretty low. Maybe 1 in 5. However, if the dollar trades to 82 this week and the BoJ is a no show, the odds of a blowup go to 2 in 5. The NY close for USDJPY was 83.20. About 40 bips from where the rubber meets the intervention road. An Octoberfxest. Could be a wild party.

Note:
I am going to ignore the evidence that BoJ intervened sub rosa on the 24th. I think this may have been just a “clean up” to bring the total to the agreed 2.125T. The amounts involved were small and had only a very short impact. Future intervention will be at lower levels and it will be immediately confirmed by the BoJ (attempt at Shock and Awe). This is a critical assumption of mine. It is a big gain/big loss kind of assumption. 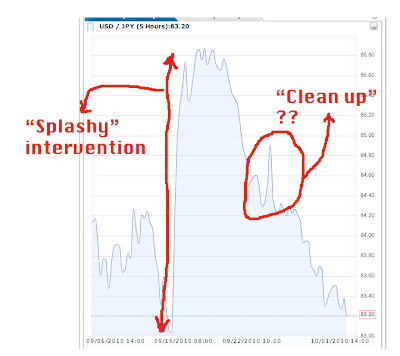 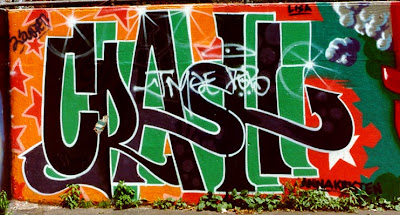