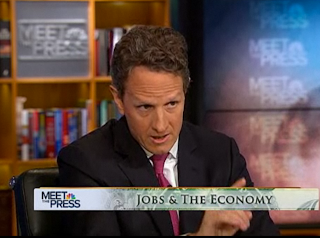 Some refreshing words from the Treasury Secretary, Tim Geithner this morning on Meet the Press. He had this to say: (15:20 into this clip) Note: An 8 second clip of Tim's words: Link

We don’t have the ability (because of the overhang in housing and the problems in the financial sector) to artificially engineer a stronger recovery.

Imagine that! Geithner acknowledges what I (and many others) have felt all along. The structural issues in the economy trump the government’s ability to engineer a recovery.

The Fed has taken extraordinary measures on the monetary front. Since 2009 we have had $1.2 trillion of fiscal stimulus measures as well. We have had TARP and the bailouts of Fannie and Freddie. But the evidence is clear that it has not worked. Unemployment is today near a record and the more important measure, U6, is at 16.2% (about where it was a year ago) Nothing that has been done has moved the needle. 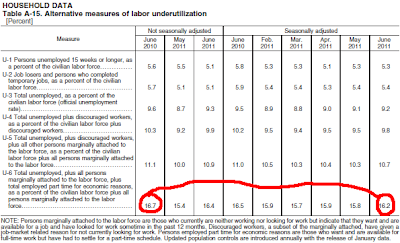 Geithner might have put it differently. He could have really put it on the line. I would have preferred that he had said:

"Keynesian economics has not worked. At best, it has given us a small reprieve from the restructuring that must happen. Our government can’t fight the forces of economics any better than we can fight the forces of nature. Large stimulus measures will not bring the desired results. We have to suck it up and take some pain. We can’t go on spending money that we don’t have to fix a problem that can’t be fixed. If we tried, it would be just be a waste of time and precious financial resources. We can no longer afford to throw good money after bad."

Of course Tim was not as blunt as that. But read his words. It means the same thing. Sorry Keynesians, I know the truth hurts. 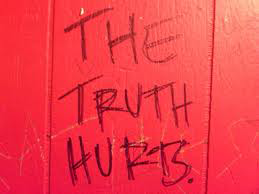