In a story that set off shock waves throughout the gold bug / Deflationista lemming communities, an unusually credible story appeared in the British newspaper the Independent claiming the Petro-Dollar was soon to be extinct. Gold bugs quickly reacted by celebrating, telling all their friends "Told you so!", and subsequently loading and unloading their firearms in glee. Soon after the initial shock wore off, central bank officials were forced to Deny Deny Deny and the mainstream media reluctantly was forced to cover a story that was not getting much attention. Now here we stand the day after Columbus day, with gold at record highs at around $1060, perhaps with gold even in stealth backwardation, and we are rapidly approaching that oh-so wonderful October crash window. Exciting times, no doubt. Here is the part where I tell you to dump your crap ETF shares and get real bullion if you want gold hedge exposure to limit currency and counterparty risk.

Oh irony of ironies. Just as certain deflationista bloggers wax poetic about how it does not matter what oil is priced in, we receive this little gem, indicating that indeed said central banking cretins found the Petro-dollar critical to confidence in the global fiat system. The United States' gold default in 1971 is finally coming home to roost. Are you positioned for the changes? When this all finally comes crashing down, it will not be the dollar that survives. 
Our great fearless leader has won the Nobel War Prize for his efforts to destabilize Pakistan. This puts him up which such luminous past figures such as Henry Kissinger, "that 70s" war criminal and author of US State Department Policy Planning Memo 200, advocating forced dopopulation of multiple third-world countries. How's that Nobel Prize treating you Dr Strangelove... I mean Kissinger... no matter! This award was clearly a mistake -- and works towards our benefit.  The elites could not have done a better job jolting several million people awake, in a grand "WTF" moment. Thanks guys! Congratulation on your War Prize Mr President!

"The announcement came as a surprise. Obama's name had not been mentioned among front-runners , and the roomful of reporters in Oslo, Norway, gasped when he was named." 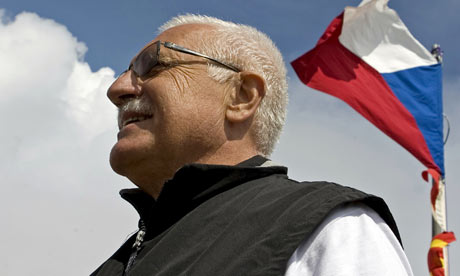 Vaclav Klaus, the anti-EU president of the Czech Republic, today moved to re-open the union's ill-starred Lisbon treaty, stirring exasperation in Brussels, Berlin, and Paris by demanding that Prague be granted exemptions from parts of the reform blueprint. THIS WEEK IN MAYHEM It is all coming down to gold.