The WSJ.com is out with a short profile on Minneapolis Fed president Narayana Kocherlakota, pumping him up as a strong supporter of Ben "QE2'in' the recession away" Bernanke:

Narayana Kocherlakota gets his first crack at voting at Federal Reserve policy meetings later this month, and the wonky former academic said he is likely to support the Fed's controversial $600 billion bond-buying program.

"The bar for dissent from the committee is going to be pretty high for me," Mr. Kocherlakota, 47 years old, said in an extensive interview last week, his first with the national media.

Translation: [in robot voice] "I can't think for myself."
And what is this talk about "former academic"? Once a man climbs into that Ivory Tower he never comes back down. For one, he doesn't need to because this nation is WIRELESS now, he can transmit his "wonky" thinking far and wide with very little effort. Also, despite the lack of oxygen, it's actually much easier to breathe with ones head stuck firmly in the clouds because there's a lot more moisture up there.
These guys are like gang members, once an academic, always an academic, until the day your policies are adopted by the leading political party and they quickly lead to mass social upheaval and economic turmoil. But even then, only if you belong to the "Right" will you be so disgraced and your academic street cred withdrawn. Lefties are free to rep themselves as hardcore academics all they want, no matter how bad they screw things up.

The question of a formal dissent is important given the divisions inside the Fed that emerged as it launched the bond buying in November. Dissent would make it harder for Fed Chairman Ben Bernanke to stick to the program or to expand it if the economy weakens anew.

Unless you're Ben Bernanke, or Hank Paulson. Then you just spook dissenters with end-of-the-world rhetoric if you don't get your way. Or baseball bats.

Caption: Ben Bernanke, up to bat.

Could Kocherlakota get kookier? Sure he could!

Mr. Kocherlakota has come out of his shell slowly since succeeding Gary Stern at the Minneapolis Fed in October 2009. He maintains a strong interest in research, regularly attending Minneapolis Fed seminars conducted jointly with the University of Minnesota, in a research department conference room that the local PhDs call their "inner sanctum."

Great, an FOMC chairperson with a taste for divine-right monetary policy. Man, hanging around in a research alcove with nerdy local monks discussing the finer points of interpreting the entrails of recently sacrificed goats, aka Fed scientistic statistical "research"-- this guy has really found a way to come out of his shell. 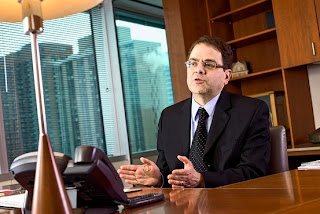 Caption: Kocherlakota gives an interview to the WSJ in front of the empty bookshelf where he derives most of his great ideas via intense research. When asked what genre he finds most influential for crafting monetary policy, Kocherlakota replies, "Fiction, undoubtedly." (image courtesy of WSJ.com)
And what does Wall St think of Our Man in Minneapolis?

"He's smart but relatively new to the practical aspects of reading the economy and implementing monetary policy," said J.P. Morgan economist Michael Feroli. "You can almost see his thinking evolve as he acquires more on-the-job learning."

Does a witty joke even need to be made in the case of a man with near-consular power over monetary policy decisions who is learning on the job? "[pressing button marked "INFLATION"] Ohh, whoops! That didn't work, let's try this one..." And again we have reference to this occult divination Kocherlakota and other Fed officials are known for in that he has yet to prove his capabilities in "reading the economy."

Mr. Kocherlakota was born in Baltimore to two statisticians; reared in Winnipeg, Manitoba, and enrolled as an undergraduate at Princeton University when he was 15 years old. When asked what it was like to go to college at such a young age, the theorist responded that "it's hard to do the counterfactual."

Indeed, it is, Mr. Kocherlakota. Yet, somehow, this difficulty hasn't prevented you or the other Fed braniacs from insisting the economy would've been far worse in the long run without your wise and timely interventions in the market. No doubt the soothsaying that preceded it all was even more challenging.
The son of two statisticians... I almost feel sorry for him, the poor boy never had a chance.

His assertion in August that the nation's unemployment problem might be at least partly immune to Fed action drew fire from Paul Krugman, the New York Times columnist and Princeton economist.

"The Fed does not have a means to transform construction workers into manufacturing workers," Mr. Kocherlakota said. Mr. Krugman assailed the argument as a flawed excuse not to act.

Finally, the man demonstrates some aspect of a winning personality! Not only did Kocherlakota manage to piss off the world's preeminent politician masquerading as a thoughtful economist with mass appeal, Paul Krugman, but he accidentally stumbled upon Austrian economic theory in so doing by verbalizing the truth that labor is not merely the letter L in some aggregate equation but in fact consists of specific individuals with specific skills and talents, a manifestation of the division of labor which Fed monetary policy is powerless to do anything about.

So action, using his calculations, looks a long way off. But he says the links between unemployment, inflation and the next tightening cycle could become a hot topic by year end.

As always, Mr. Kocherlakota, we'd love to see your calculations, and even better if they were subject to our critical review prior to implementation.
Bernanke has lucked out. I can't think of a more feeble-minded person suitable for the glorious role of Human Footstool To The Great Fed Chairman. For a man who likes geeking out with PhD students in the inner sanctum, however, getting down on hands and knees for "the most powerful nerd on the planet" will likely be quite the honor.