Guest Post: Major Structural Changes in US Equity Markets You Must Know

Brandon Rowley over at Wall Street Cheat Sheet has penned a post conveniently summarizing some of the most critical market structure trends that we have been highlighting for the past year. In a market that is increasingly computerized, the only key benefit presented by the pro-algo lobby has been that liquidity has increased. And while that may indeed be the case for the 50 or so most traded stocks whose trading is dominated by HFTs, the trade offs have been a spike in the average quotes per minute over the past decade, a fake order depth which disappears on a moment's notice, a dramatic shift away from traditional marketplaces and to "gray" venues, and most importantly, a massive surge in the cancellation to execution ratio, which is currently at an all time high, with the Nasdaq seeing 30 cancels for every execution. With so much probing and poking by computers to test which bids and offers are real, it is a miracle we don't have flash crashes every single day, as the bulk of the liquidity, likely well over 90%, is a sham.

Major Structural Changes in US Equity Markets You Must Know

Knight Capital Group recently commissioned a study entitled “Equity Trading in the 21st Century” that explores the major structural changes we have seen in the markets so far this century and the impacts it has had on investors and traders. I will not offer an opinion or recommendation but rather just summarize the transformations the authors present.

The professors who authored the paper offer well-argued perspectives and it’s worth the read if you are interested in the regulatory angle. But, based on previous interest in our articles on high frequency trading, it seems that many would find it worthwhile to examine the changes that have fostered a system where HFT dominates the tape for better or worse. So, how has the market changed?

Within six cents of the national best bid and offer, the depth of the book has seen a dramatic increase recently. From 2003-2009 the depth looks to have averaged around 2,000 shares on the bid and offer for S&P 500 companies. Yet, in just 2009, the book saw a dramatic jump in displayed quote volume leaping from lows of 1,500 shares to over 4,500, a 200% increase.

The depth, to be sure, is not necessarily indicative of actual executed volume. We argued in an earlier paper that this is largely a result of HFTs providing bids and offers that they intend to cancel without a fill such that the “real” depth is much less than displayed. Note: the inclusion of stocks outside the S&P 500 based on nominal share sizes is misleading. We would rather see these stocks on their own graphs or a logarithmic graph to interpret it logically. 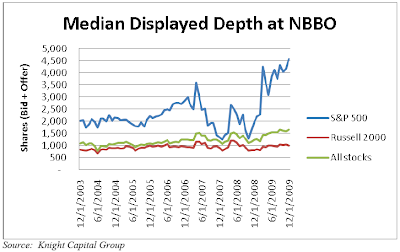 Average trade size on the New York Stock Exchange (NYSE: NYX) has consistently fallen for the last six years. At the beginning of 2004 average trade size was over 700 shares while now it is slightly over 300 shares. The hyper growth in automated trading strategies has helped cut average trade size in half in five years. Large-scale investors have utilized algorithms to execute orders in an effort to hide their intentions and reduce price impact.

Splitting up large orders into smaller and smaller pieces minimizes the impact of any single order on the market and can reduce other traders’ abilities to capitalize on their inefficient order flow. Many scalp-style active traders have found order flow more and more difficult to read because falling transaction costs have allowed institutions to invest heavily in algorithm development in order to hide their intentions while executing orders. 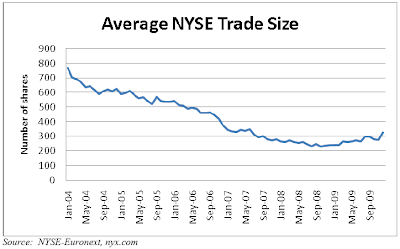 Average Quotes per Minute Skyrocket, Then Return to Earth

Average quotes per minute coming through skyrocketed in the Panic of 2008 when markets became the most volatile they had been in decades. Quotes per minute went from below 50 to over 500 in five years before falling back to more normalized levels as volatility slowed. Quotes per minute are now around 200, still roughly a 900% increase in the last six years. 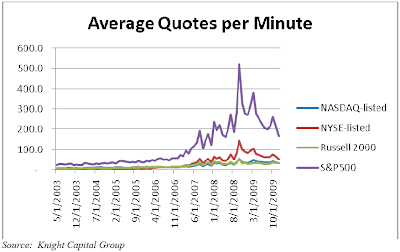 Early 2002 saw a cancellation to execution ratio of ten to one, but that ratio has steadily climbed over the years. Now, the Nasdaq sees 30 cancels for every execution according to Knight Capital Group’s research. This increasing ratio and the upsurge in average quotes per minute is consistent with a market that has become HFT dominated with greater total volumes coupled with lower average trade sizes. 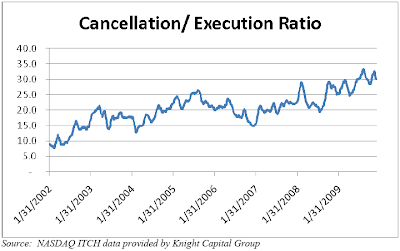 NYSE to Become a Museum

Volume on the New York Stock Exchange has collapsed and it seems like it won’t be much more than a decade from now that the NYSE Floor will be turned into a museum. Regulation National Market System (NMS) was passed in 2005 and opened the NYSE up to increased competition. At the beginning of 2003, the NYSE executed 80% of the total volume.

This ratio has plummeted as electronic communication networks (ECNs) gobbled up market share.The NYSE ex ARCA accounted for only 25% of all volume by the end of 2009, about a 70% decline in market share in just five years. NYSE Euronext has wisely invested in ARCA so the company is far from doomed, but the physical floor will likely be an exhibit in the not too distant future. 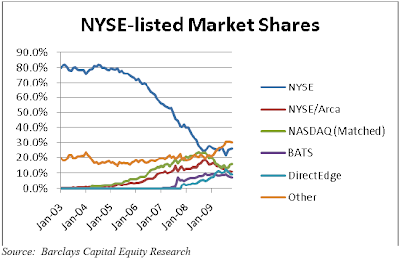 All these charts are consistent with the growth in high frequency trading as a means of increasing efficiency, making the execution side of the business largely computer-driven. The days of the floor broker are rapidly disappearing. Automated trading is here to stay and participants need to learn how to adapt.

All charts are excerpted from “Equity Trading in the 21st Century” commissioned by Knight Capital Group and authored by professors James Angel of Georgetown University, Larry Harris of the University of Southern California, and Chester Spatt of Carnegie Mellon University published on February 23, 2010. Brandon Rowley is a professional trader at T3 Live.