Nuclear Japan, Stock market "holding up", Pictures of 'Reactor' 3 and 4

I have continued amazement that very few photo from "on the ground" have been released from day 1.   It seems that the plants would have many cameras built in, and those systems destroyed by the quake or blast could be replaced with quickly set up cameras and/or robots.

This picture says volumes...."Reactor 3 and 4" are not really facilities anymore, as opposed to smouldering masses of twisted metal. 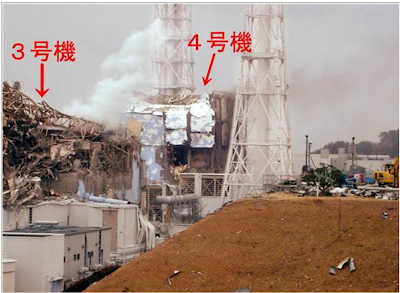 From my continuing research, Chernobyl radiation release was pretty bad, and resulted from direct fire on the uranium and by-products.   Now they say that has already happened in Japan (perhaps).  See below for "Spent Fuel on Fire?!" which is still not 100% clear in my mind.

WORST CASE #1
A scenario in which molten reactor materials -uranium--"perfectly" wraps around a pool of water, causing a super-heated explosion of steam launching radioactive materials in a massive blast is the "worst" case scenario, but what are the odds of this perfectly happening, perfectly wrong?   Very small is the general consensus and I believe that one.   Maybe in the range of 1%, NOT 10%.
WORST CASE #2A
What about a 5000 degF mass of molten reactor materials (let's just say uranium, although stuff morphs into other stuff that can be worse) melting it's way through a damaged concrete floor, into a pocket of water or sea water below the plant, or rolling right into the ocean?   Purely conjecture, but these are the mostly likely worst case scenarios IMHO.

WORST CASE #2B
And the Chernobyl type scenario, direct fire on the nuclear materials or, even worse, on the "used" nuclear waste that was being stored at reactors 4, 5, AND 6.    Prior to last night, we never even heard of 5 or 6, now we find that rather than store the waste materials underneath a big mountain like in western united states, that they decided last fall to store all the old materials in the facilities next to the working nuclear plants, on the ocean, on the ring of fire.

From a Russia Expert on Chernobyl, and the storing of nuclear spent materials--
Chernobyl Expert slams storage methods

"Spent Fuel on Fire?!"  --this is not clear, but seems quite possible.

Link below is from UN Nuclear Agency saying that indeed a spent fuel pool was in a fire at Reactor 4, review the picture above.  Indeed that article below is very clear that the fire was at the spent fuel pool, and that is what caused a huge release of radioactivity.

Spent Fuel Pool in a Fire

Corrections, further misinformation, and Pot Shots---
So someone says the fire was at the spent fuel (that would be very bad), and then someone else says...No, that fire was from an oil leak from a pump--and then points to a link---of which when you check the link, says nothing about the location of the fire, just that it was put out in 2 hours.  The second link also states how they tried to add water to the #4 spent fuel pool--and failed.   These spent fuel pools have 16 feet deep water over the top of the used fuel stored in them.   FOR CONVENIENCE, these pools are located at the roof level of the containment buildings!  What is there was a massive earthquake and the building was cracked, and the water leaked out!   What if the containment building also blew up due to hydrogen explosion.

http://www.box.net/shared/3kmi4xgqv1
Here are the links to the "Corrections" comment -- the Pot shot part
http://www.chron.com/disp/discuss.mpl/ap/top/all/7474227.html
http://nei.cachefly.net/newsandevents/information-on-the-japanese-earthquake-and-reactors-in-that-region/


Here is the problem: The Authorities are very concerned with all out panic.  The Japanese people have strong morale values, and do not just "lose it" like would happen in most places already.   But at some point, if they reach the breaking point, it could be a very strong social reaction.

The governor of Fukushima prefecture, Yuhei Sato, criticised official handling of the crisis, telling Japan's NHK TV: "The anxiety and anger being felt by people in Fukushima have reached a boiling point."

So-the authorities want calmness, they don't want to instill panic.   And thus they feel it necessary to withhold information, which has obviously been withheld from the very beginning.  Also the classic example of "Denial"....maybe it is not as bad as we think it is...example...."maybe it is just a coincidence that 4 airplane are off course and not communicating on 9-11-01".    Denial, and hoping to avoid being "chicken little" should the situation not be as bad as you think it may be.  Very closely related to Denial is "Hope".   Hope is a double edged sword, without hope --the will to take effective action can be curtailed, but the wrong hope, the ability to see the need for action can be blocked.

From the Emperor of Japan who rarely speaks in public, but is highly respected.

"I am deeply concerned about the nuclear situation because it is unpredictable," he said. "With the help of those involved I hope things will not get worse."

Please read this quote below and then look at the picture at the top of this post.

Nuclear experts have repeatedly stressed that radiation releases on the scale of Chernobyl are unlikely or even impossible, given the Japanese plant’s heavier engineering and additional layers of containment. Still, Tokyo Electric said radiation briefly rose to dangerous levels at the plant Tuesday morning and again on Wednesday.

But people have to make real decisions.   Do we encourage our family in Tokyo to leave at any cost, whatever it takes?   Transportation is difficult, most trains are running, there are blackouts on a regular basis.    Just how bad is it, how bad could it become?   Yesterday the winds were blowing the radioactive steam and such across the mainland of Japan, today the winds are blowing westerly across the Pacific.

And therein lies the dilemma, all based on poorly provided information, does one recommend drastic action?  Indeed, I would flee...the cost of fleeing may be fairly dear, but the cost of staying and have the worst or second worst or third worst scenario play out may be a very very high cost.

Finally, something to think about, here is one that appears to be a few days old, from and MIT nuclear "expert" stating in these excerpts--

Well, first off, we can't have a Chernobyl-like situation. The system is designed so that as long as we keep water in there to keep it cool, nothing will happen.

Hypothetically, if the water all boils and evaporates, then the fuel will stay molten and eventually melt through the steel vessel. But that's already beyond a hypothetical worst-case scenario for me.

Then you have the other containment vessel, with a concrete faceplate underneath that's between four and 10 feet thick. But melting through that is hypothetical beyond normal reasoning.

And then, worst comes to worst, there are pumps that can take water from the local cooling water supply, in this case the ocean, and just pump water in there. As long as there's water in there, it might be expensive for the utility to get it cleaned up, but everything is going to be fine.

It might be a financial disaster, but no member of the public has been hurt, and I doubt anybody will be.

Here is a link to that MIT "Expert" -- he is already proven wrong at many levels.

Expert describes how bad could it get

This type of thinking reminds me of how our US security "experts" could not imagine an airliner being used as a weapon.    When will we demand better?

SEE NO EVIL
Chernobyl was attempted to be covered up 100% at the beginning, even though eventually 600,000 people used as "liquidators" were eventually brought in to cleanup, the first 200,000 were exposed to heavy radiation.  Some pictures (still in my mind from 1986) showed workers in normal street clothes shovelling radioactive materials into wheelbarrows.

Tokyo Electric Power tried to cover up their problems at the start, the Prime Minister was reportedly extremely mad when they finally fessed up a little bit 3 hours after it had already become a real problem.

GOOD NEWS
Apparently they are bringing in "Firm Power" meaning a new power line from other utilities so at least the brave workers at the site have some real power to help in whatever tasks they are doing while wearing full suits and humping around huge air tanks on their backs.

I will be out in training all day Wed