A frequent topic here has been the ongoing and still-building food inflation crisis. The MSM is just now awakening and beginning to discuss the implications. By the time the great unwashed become fully aware of the magnitude of this problem, it will be too late. You, my dear reader, still have time to prepare.

As you know by now, the endless money printing by our inept and foolish "leaders" is causing prices to rise in all things dollar-denominated. Economics 101 teaches us that more dollars chasing a static supply of goods leads to an increase in price. Eventually, these rising input costs are passed along to the consumer in the form of cost-push inflation. This insidious monster is the most painful of economic afflictions as rising costs are not met with commensurate rises in wages. The pain to the consumer is great and often brings about social unrest and upheaval. We will surely discuss this phenomenon in greater detail in the days ahead. For now, I wanted to give you charts on some items that we don't normally follow here, just so you can grasp the dimension and scale of that which lies ahead.

First up is the primary commodity index, the C.R.B. Here is the current makeup of the index:


And here is a weekly chart: 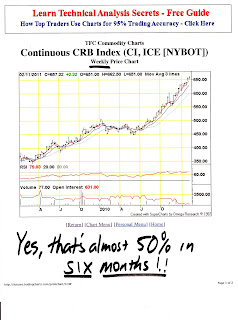 When did the index really take off? Last July. Why then? That's when the realization was made that QE2 was coming. Will it continue rising? As long as QE continues? Will QE ever end? No. It can't.

First up, coffee. Coffee is a great cost-push example. For now, companies like Starbucks are trying to absorb some of this rise in price by slashing margins and other internal "controls". They can't can't keep this up forever, though, so soon your latte is going up in price. A lot. Interestingly, SBUX has risen about 30% since July. Does that add up for you? Me, neither. 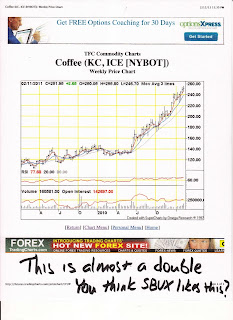 OK, now, here's where the real problem is: Corn and the other grains.  The dispshit shills, LIESman, Krugman et al , can wax prophetic all they want about the minimal impact these higher prices will have on the consumer. You can draw three conclusions from this:
1) They are all profoundly stupid, almost to the point of partial retardation.
2) They are criminally negligent in their lack of basic economic education.
3) They are deliberately misleading people in the hopes of maintaining the ponzi as long as possible.

I'll let you decide which is true. I know which one I believe.

Back to corn. Look at this chart: 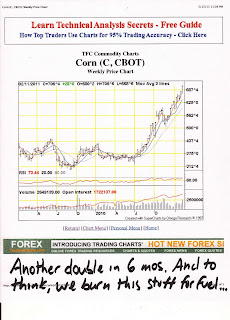 This near 100% move has occurred in the offseason. What happens if we get a little drought in the American midwest this summer?

What the shills fail to recognize is the interaction between agricultural commodities. In this case, its the relationship between corn, cattle and hogs. You see, if you're a rancher or a pig farmer, your primary input cost is feed. (Ever heard of the term "midwest corn-fed beef"?) When feed costs double, your first move as you attempt to control costs is to sell some of your stock. As those cows and pigs come to market, their presence has the same impact as any other increase in supply...a temporary suppression of price. Yet, even in this environment, look at a cattle chart: 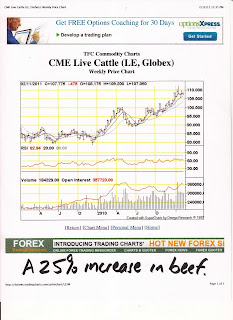 And look at hogs: 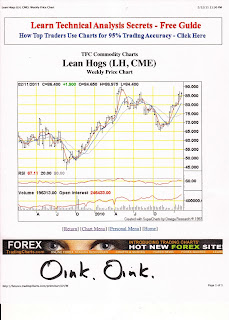 The only thing that has kept cow and pig prices from rising at the same rate as the grains is this temporary increase in supply. Replacement rate of a herd or barn is usually not much more than 1:1 so it follows that all of the excess supply currently in the market will lead to a commensurate drop in supply later this year. Add less supply to increased demand (due to QE) and you get explosive price increases. So, not only are the grains significantly more expensive, protein is, too. Not good. Not good at all.

Thus the phrase: Prepare Accordingly. The time is now. We're already seeing, in other parts of the globe, what hungry, desperate people are willing to do. This will continue and get worse.
Prepare yourselves.
Prepare your families.
Prepare your friends.
Consider things through to their logical conclusions.
Be ready for any and all eventualities.