I go to a 4th of July party

So I go to a 4th of July party. Lots of people; tons of screaming kids. It’s one of those get-togethers where everyone brings some food to share. (As a result there is ten varieties of potato salad, a half dozen vegetable dips and five plates of deviled eggs. And it was hot out.) I brought vodka.

It was a mixed crowd. A few local business folks (my plumber was there). Mostly commuters to the Big Apple. Lawyers, a doctor or two. I met one accountant. The Madison Avenue types are always a laugh. A number of Wall Streeters (more women than men). And one blogger.

So I started an argument. It got out of hand. Some spouses had to break it up. One lady later accused me of pushing the row; I was ‘raining’ on the holiday fun. And anyway, “there were kids around”. What type of example were “we” setting arguing like that?

At one point I found myself in a small crowd of folks. Being the provocateur that I am, I asked the ‘right’ person what she thought of Obama’s comments last week about taxing the shit out of those who use corporate jets.

The response was an unequivocal (and predictable) voice of approval. This person is a teacher. She knows first hand about the squeeze her profession is facing. She says:

“Those who fly on these planes have to pay!”

I asked this particular question because I happened to know that one guy in the mix worked for GECC (and knew a thing or two about aircraft financing). Another has a wife who makes a decent buck as a ‘Stu’ on private flights. They jumped all over the teacher.

“You think it’s okay to put my wife out of work? So teachers can get a bloated pension?”

“You don’t know what you’re talking about. Private aviation contributes $150 billion to the US economy. It employs 1.2mm people, most of those are union jobs. This is a success story. And you want to cripple it!”

The teacher looked like she was hit with a brick. But she has supporters. The local Veterinarian comes back with;

“What are you? Tea baggers? (the growing crowd of kids loved that insult) Why do you attack (the teacher). She’s been making a real contribution most of her life!

I guy I don’t know chips in:

I work for IBM. We have a 401 plan, but there is no guaranteed pension for me. Why should there be for a teacher? For that matter, why should a conductor on Metro North get that?

This was great. The IBMer stepped into a trap. He didn’t know that there were many attendees who work on the trains. (The main rail yard is right here in town) So right away it was; Fuck that! and Bullshit! and Fuck you! The poor IBM guy slinked off mumbling something about needing to ‘refresh’ a drink.

The Vet, (who now thought he was on the high ground) rang out:

The Republicans are stupid. We should roll back the Bush tax cuts. Rich people can afford to pay more!

I thought it was time to stir the pot a bit more.  So I shook things up. I knew that the damn Vet was overcharging a bundle tending for the dogs and cats. So I say:

What’s rich? And who will pay these taxes you want? This plan will also index the AMT tax. Anyone with $165,000 of partnership or S-corp income is going to get hit.

Then I rubbed it in with:

If you own a business and live in a high income tax state and also pay property taxes and have kids you’re about to be whacked!

The Vet, of course, has all of that working against him. He looks surprised and says:

You can’t move the dial on our problems with more taxes. You have to cut expenses. If you’re not willing to talk about Social Security and Medicare you’re just blowing in the wind.

That took things over the top. Those that were AARP eligible looked as if I had farted. Those under 35 gave a Yeah! Or a Right on! So I closed the door on any chance of civility when I asked a young (hot head) who works construction:

“How do you feel about paying Social Security for old people”.

He comes right back with the response I was looking for:

That got everyone going. Out of no place there are now 20 are so arguing about one thing or the other.
.
-The local Pastor is having a set-to with an accountant.
.
-A nurse is fighting with a doctor.
.
-Two mothers are ganging up against the middle school principal.
.
-The soccer coach is arguing with two Wall Street wives.
.
-Two oldsters are defending the fact that they get SS benefits with five younger workers who are complaining they will not see a penny of what they have paid. The grey hairs are losing big time. “Boomers Suck!” is heard.
.
-The car dealer is fighting with the insurance salesman. This is getting physical with both sides pushing. (I learned later that infidelity, not politics or economics was the issue)
.
-A guy who runs a decent sized lawn business is fighting with two of his customers over the fact that illegal aliens are mowing the lawns. One of the wives is screaming at the poor bastard.
.
-Four people are fighting over the local nuke (Indian Point). Some wanted it closed, those who work there were fighting like hell.
.
-Young kids are crying. Dogs are barking. Adults are shouting.
.
-Husbands are trying to pull back wives. Wives are pulling back husbands.
..
-Fingers are pointing and swearing is happening.
And then it got ugly.

Ms Mars, (the obese portly lady who gives out all the parking tickets in town that EVERYONE hates) tripped over a chair (she later said she was pushed) and all 260 pounds of her fell flat in the middle of an eight-foot aluminum folding table. There was at least 20 paper plates filled with all sorts of stuff that got catapulted into the air. Ripe potato salad and uneaten eggs were launched. Chewed on spare ribs were flying next to cups of stale beer and watery cola. Most of the flying garbage met in the middle and ended up on the prostrate Ms Mars.

It didn’t end there.

The football coach was startled by the flying Ms. Mars. He jumped up so fast that he banged full force into the librarian. Her ninety-five pounds got tossed (butt first) into the next table and it too became a casualty with food, people and folding chairs going in every direction. Several folks fell to the ground trying to avoid the flying food and drink.

And then it got silent. Only the music and a dog could be heard. The hostess came running from her home screaming “Is anyone hurt?!?”

And then she tripped over a pool toy (the Meyer twins were responsible for leaving it there). It was a perfect face plant. Dozens where heard groaning in sympathy. (I actually heard a chuckle or two)

I think it was the kids who first started really laughing. Ms. Mars and the librarian were dirty, but fine. (Ms Mars looked like she had been swimming in a dumpster) Our hostess suffered little more than grass stains and embarrassment. So soon everyone was laughing and there was a collective effort to right tables and chairs and clean up some of the rancid salads. The fighting ended as abruptly as it had started.

I left early. There was supposed to be some fireworks after sunset. I’d seen (and set off) enough already.


In our crazy system the next election cycle starts this weekend. If there is a credible candidate against Obama we are going to see some ugliness come to the surface. There might even be a food fight or two. The country is deeply divided on so many issues. Unfortunately I don’t think it will end with a laugh. It  might just rip us apart. 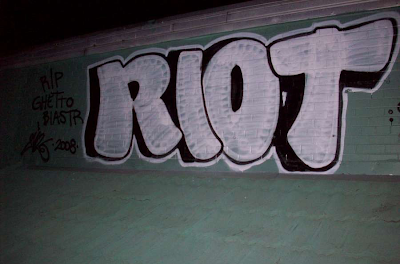