Illinois made headlines a few weeks ago when it overtook California as the worst credit risk among American states. Now, the fifth most populous state in the U.S. has officially overtaken Iceland in the default risk category as well. (See screenshot below from CMA site today) 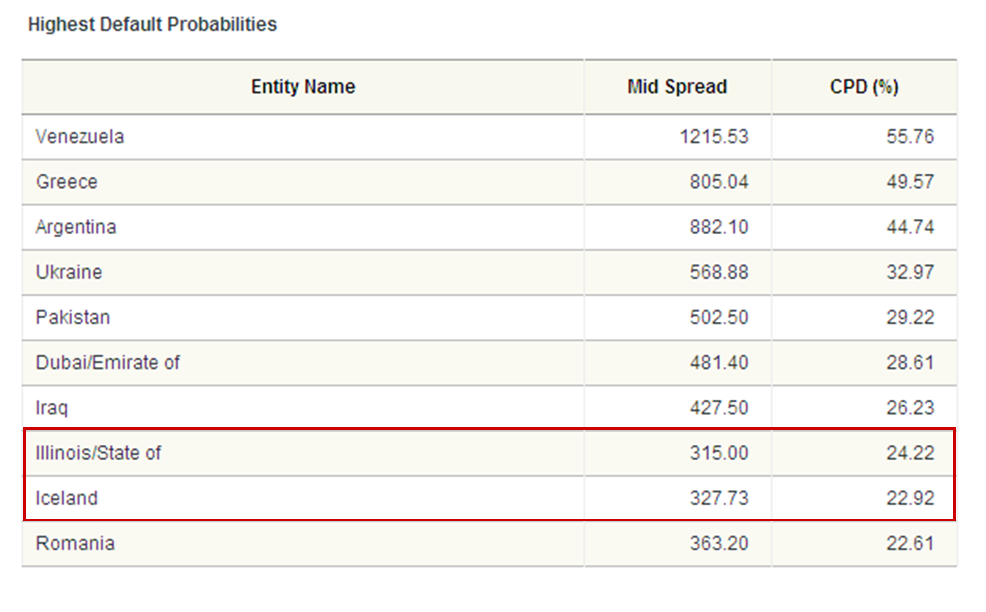 Iceland, as we know, suffered from one of the largest banking collapse in 2008, essentially went bankrupt, and has been stuck in the "2008–2010 Icelandic financial crisis” ever since. (see CDS chart from CMA) 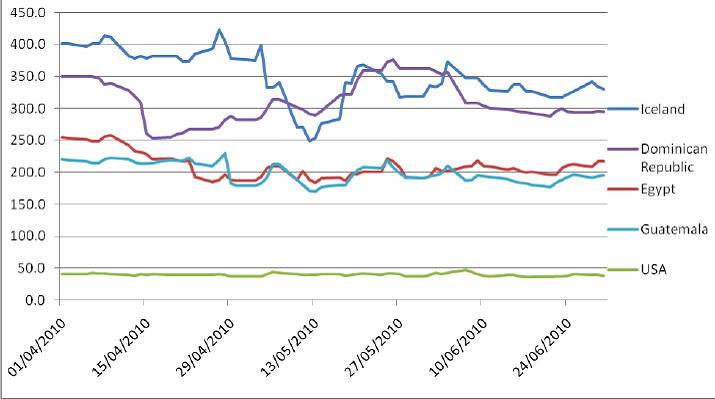 So, for Illinois to jump ahead of the Arctic country, in terms of default risk, is no small feat, to say the least.

Just how much trouble is Illinois in?  The State is looking at a two-year budget deficit going into FY2011 of at least $12.8 billion, according to a report issued by the Civic Federation's Institute for Illinois Fiscal Sustainability in January of this year,

Its poor financial discipline and the lack of will to deal with budget issues prompted both Fitch and Moody's to downgrade the State's debt rating by one notch sending its credit default swap (CDS) to a record high.

After selling another $900 million in taxable Build America Bonds this week, Chicago Tribune estimated Illinois could incur extra interest costs of about $9 million a year--$225 million over the life of the bonds--due to the wide credit spread.  The State has already issued about $7.8 billion in debt in 2010, and got $4.7 billion in unpaid bills in the fiscal year ended June 30.

And this is just the tip of the iceberg as the cash-strapped State said it would issue yet more debt.  Even more alarming is that Illinois is not along, quite a few states like California, New Jersey, and New York, just to name a few, are also among the deeply indebted, and high credit risk in the U.S.

For 2009 to 2012, U.S. states would have nearly $300bn in budget deficits, according to figures from the National Association of State Budget Officers (Nasbo). Meanwhile, the Center on Budget and Policy Priorities projected that states’ cumulative budget shortfall will probably reach $140bn in the coming year, the biggest yet.

So, when the urgency of European debt crisis subsides, and the bond market shifts its focus away from Europe and onto the United States, America could have its own--Greece, or even PIIGS--of some sort, as early as next year.