The news today continues the rumoring that Italian banks and bonds are going to see problems this year or early next year. This follows an interesting email exchange (dated the 8th) that I had with a BoomBustBlog contributor (his comments listed below) concerning our European bank and soveriegn research from last year.

Of note, please look at the charts from Mish. 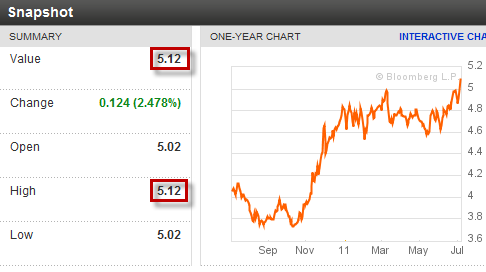 Italy has clearly recently broken the 5% support, and if on a tech point of view, a quick 40bp is guaranteed, to 5.4% (the previous range was 4.6%-5% so 40bp wide), given the context, and given that German yields are going DOWN, this is the sign of something much much bigger, like what happened to Spain and perhaps Portugal. You've seen the info as well on the recent volatility in Italian banks, and headlines shifting to Italy, I now believe the big move is happening right now. The european leaders must be shitting in their pants.

Actually even the spread France vs Germany seems to be going out of its range, thats a new thing. There can be gaps if a new bond is issued, but I've noticed a much bigger than usual gap this day, so something is going on, I've asked a trader as well if something was going on with french oats, there is definitily a significant move.

And on that note, the following Monday: European Stocks Decline on Italy Debt Concern, China Inflation

European stocks fell for a second day as concern grew that the region’s debt crisis will spread to Italy and China’s inflation surged to a three-year high. Asian shares and U.S. index futures slid.

Italian Banking Macro-Fundamental Discussion Note) reveals what we percieved to be weakness in this bank back in February of 2010 with an increasing Texas ratio and increasig proportional NPAs.

As for China, well according to China Is In a Self-Imposed Bubble That Has Nowhere To Go But Bust! You Don't Get Something (Growth Through Stimulus) For Nothing (No Economic Consequences)...

Now, it didn't take a genius to figure out this would happen. As a matter of fact a slight dose of common sense (when was the last time you got something for nothing, really?), a little historical perspective or a BoomBustBlog subscription would have sufficed.

May 11 (Bloomberg) — China’s inflation accelerated, bank lending exceeded estimates and property prices jumped by a record, increasing pressure on the government to raise interest rates and let the currency appreciate.

Consumer prices rose 2.8 percent in April from a year earlier, the fastest pace in 18 months, and property prices jumped 12.8 percent, the statistics bureau said in statements today. New lending of 774 billion yuan ($113 billion), announced by the central bank, was more than any of 24 economists forecast.

Excerpts from the HSBC forensic analysis featured in this post: