If you give money to candidates the amount and beneficiary are made public. If you look me up you would see that I have contributed to Democratic candidates on a regular basis for a long time. Not this year. As a long time Dem, it is hard for me to describe my disappointment. There is very little that I can look to over the past two years and say, “They got this one right”. So this year I am going to vote with my feet. I think people like me are key to this election.

I live in Westchester county NY. This is the 19th Congressional District. There is a lot on the ballot this year including a local plan to raise taxes and create a “reserve fund.” I will most certainly be voting against the latter. I have come to learn that “rainy day funds” get spent at the first sign of clouds.

The NY story is not so important. This is a Blue state and even with the lousy governance the Empire State will remain blue. But I think the Wednesday morning look will show that NY has gone decidedly in the direction of purple.

For Governor we have Andrew Cuomo versus Carl Paladino. Cuomo will win handily. Paladino is an upstate Pol who has no credentials to be Governor. He has threatened news reporters with violence and made a number of blunders. He said NY’s junior Senator Kirsten Gillibrand, “is Schumer’s “little girl”. That went over big. Carl’s only contributions so far has been is his slogan, “I’m mad too”. Well I am mad and I am voting for Carl. Andrew Cuomo will be NY’s next governor, but the mandate he thinks he will get will fall much shorter than is expected.

Chuck Schumer and Gillibrand will be returned to the Senate. Chuck is an ass but he is so connected that he can’t be beat. Gillibrand is running against a no-name and will coat tail herself to another term in the Senate. I'm voting for the opposition. The hell with the "ins".

My vote will likely decide the Congressional race where I live. The incumbent, John Hall, was voted in (thanks in small part to me) in 2006 when the anti Bush sentiment was racing. He was re-elected in 2008. He is a former rock star that is somewhat famous for his song, “Still the One”. John has done an okay job as a junior congressman. He voted 98% of the time with whatever Nancy Pelosi told him to. He also did a good job helping veterans get the benefits that they deserve from the government. He is running against Nan Hayworth. She is an eye doctor and has no political experience. I will be a crossover voter for Ms. Hayworth. I believe she is going to win. The polls disagree. 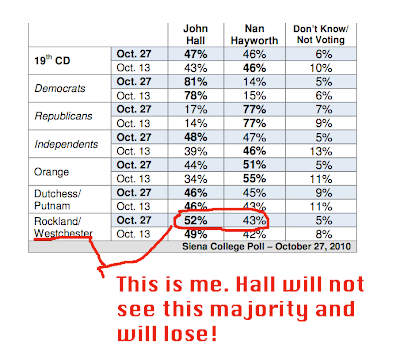 As you can see this is a tight race with a slight bias to Hall as a result of his 52/43 advantage in Westchester County. Well I can tell you that many of my neighbors are Mad too and I don’t think that Hall will carry Westchester with the majority suggested. As a result Mr. Hall will lose his seat. This district was considered “safe” for the Democrats not so long ago. I think the loss by the Dems in NY’s19th is a bell weather for how many congressional races will go. There will be a surprising number of safe seats in the House that are going away to other candidates.

So I am forecasting a blowout. There will be such a significant, I’m mad too outcome that I believe it could shake the tree and cause some leaves to fall.

This election is in large part about the economy. The will of the people will be overwhelming evident that big changes are required. Some probable outcomes:

-Obama care is dead. The entire legislation will be ripped apart.

-There will be no new significant stimulus measures voted on in the next twelve months.

-Tim Geithner will be replaced as Treasury Secretary. (A woman will be appointed as the replacement)

-The recommendations of the Fiscal Commission (due out 12/3) will have a greater chance of implementation.

-Social Security (the biggest expense) will be changed. Taxes will be increased, benefits cut and the age for benefits will be raised. This will happen in 2011. The cutbacks will be greater as a result of this election. The social consequences could be very significant.

-The fate of the Bush tax cuts will be altered. This issue must be addressed prior to 12/31 or taxes just go up. The “Voted Out” legislators will still be the ones casting ballots on this critical issue, but the public mindset will not be ignored. There are three significant tax issues on the table. Tax breaks on those earning under $250k and separately breaks for the over $250k set. This has been decided long ago. The above will get hit, the below will get the tax break extended. Nothing new.

But the wild card that will come on the table is AMT. If the exemption is allowed to expire it will hit nearly every American family making $100k. An estimated 20mm households will pay more as a result. If the Dems were to hold congress AMT would be patched and rolled over for a few more years. If the Dems lose the House but hold the Senate there will be enough sentiment to patch over the problem a bit longer. But if the Senate falls or the House is a biblical rout for the Dems (my thinking) then AMT could become law for 2011.

-Fiscal conservatism will become a respected concept. Right or wrong this will be the result if the pendulum of sentiment turns as violently as anticipated. The likes of Paul Krugman  (who having been calling for a few trillion in additional deficit spending) will have been quieted.

-The election will mean an end to bailouts. Treasury recently sneaked by a $35b bailout of the National Credit Union Association. That will not happen again. The concept of TBTF will be tested. The safety net will have been taken away by the election. The area of most concern to me is a few of the Mortgage Insurers. Some have been beaten to the ground. Foreclosure gate is another problem for these players. The MI companies owe a boatload to the banks but they owe bazillions to Fannie Freddie and FHA. A collapse of any MI company could start a chain reaction.

-The stock market likes a split government. The idea that, “Nothing will happen in D.C.” has been market friendly in the past. To a significant extent this has been priced in with the big run up in the past six weeks. At some point the market will look at the future and say, “Where’s the growth?” Without deficit spending/stimulus coupled with the higher taxes soon to come the outlook for the economy has to be taken down a notch or two. The prospect of long-term growth at sub 2% is not built into the market.

-The dollar might benefit for a bit should the headline read: America Goes Conservative. The exact opposite mentality exists in the FX market today, so the election could be seen as a welcome change in direction. But a frozen government that is faced with critical issues does not support the dollar. At the end of the day this is about “Store of Wealth”. A broken government does little for sentiment.

-Bonds will be interesting. The slower GDP outlook that will follow the election is supportive of the bond outlook. But bonds are not trading on fundamentals any longer. They are trading on QE. Bernanke wants to buy a few trillion, so prices are all geared around this.

Bernanke does not give a rat’s ass about the election. The Fed is independent and pays no heed to what the people are saying they want for the direction of our country. A dozen or so folks make these choices with absolutely no consideration for popular sentiment. This election might change that.

If the vote goes the way that I think it will the unlimited power of Ben Bernanke will be checked. It will be done in the pages of our newspapers from Wednesday on. But the real changes will take place on January 11 when the new “ins” start to stretch their muscles. There is something fundamentally wrong with a country that will send a very clear message of conservatism and a Federal Reserve that is out of control and printing $100b of phony money every month. Bernanke is going to be called on the carpet to defend what he is doing with QE. It will happen in Q1. Bernanke and his risky plans are in for a slap in the face. It will tie his hands. The results of this are potentially very unfriendly to the bond market. 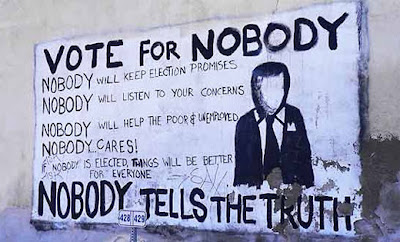