Natural gas has long been touted as a cleaner alternative because natural gas releases about half as much of the greenhouse gas carbon dioxide as coal does. Although the natural gas market is in the doldrums right now due to supply glut, with advocates like T. Boone Pickens pitching as the fuel of the future, many market players are betting on increasing natural gas demand from transportation fuels and the generation of electricity to continue for years to come.

Indeed, the U.S. Congress is considering a bill--Natural Gas Vehicles (Division B, Title XX)-that would push to replace diesel with natural gas in heavy vehicles. Part of the argument is that natural gas is substantially cleaner than diesel--about 25 percent less greenhouse gas emission.

In fact, a working paper by the International Energy Agency (IEA) says this much - On average, a 25% reduction in carbon dioxide equivalent (CO2-eq) emissions can be expected on a well-to-wheel (WTW) basis when replacing gasoline by light-duty vehicles (LDVs) running on compressed natural gas (CNG).

However, not everyone is that certain about natural gas’ green prospect.  Dr. Robert Howarth, professor of ecology and environmental biology at Cornell University, indicates that using natural gas rather than diesel in vehicles could actually increase climate change, according to his preliminary finding dated Nov. 15 of a research paper to be under peer review.

“Using the best available science, we conclude that natural gas is no better than coal and may in fact be worse than coal in terms of its greenhouse gas footprint when evaluated over the time course of the next several decades.”

His preliminary analysis includes not only the amount of carbon dioxide from the combustion emission, but also the impact of natural gas leaks from Methane. By adding methane into the “lifecycle” calculation of climate impact, natural gas could be significantly worse than diesel and coal (see graph). 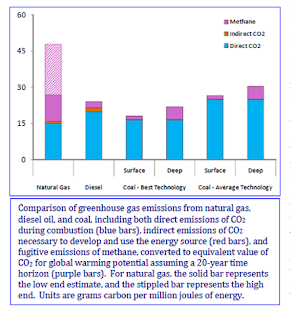 Separately, MIT also came up with a study that on a CO2 equivalent grams per megajoule basis, diesel scored at 10.7 and gasoline at 14.4, with natural gas smacking in the middle at 12.5.

The two studies make different assumptions and therefore yield significantly different results. Although natural gas is the focus for both papers; they illustrate there’s a need for a more thorough study to fully assess the potential full impact before passing legislations promoting any fuel source.

Part of Natural Gas Vehicles (Division B, Title XX) U.S. Senate bill would incentivize the development of natural gas vehicles by providing $3.8 billion in rebates.  The rebate costs is to be offset by increasing the amount of money that oil companies pay into the Oil Spill Liability Trust Fund, from 8 cents per barrel to 21 cents per barrel. And this 13 cents delta most likely will end up in our gas tank.

So, in short, in a rush to meet the emission goal, we could be subsidizing something that might or might not yield the climate change result as expected. It is standard practice in business decision process to look at the “total cost of ownership” (TCO) of a new product or service. Legislation should undergo a similarly vigorous evaluation process as well.