The Real Danger From the Foreclosure Crisis

People were told that the investment in their house was as solid as a rock: Unfortunately, millions are now upside down, because the housing bubble - fed to a large extent by fraud - has burst: And the people who supposedly verified the accuracy of mortgage documents never did so, and - in many cases - weren't who they said there were:

The foreclosure scandal will likely depress the real estate market, as clear title for millions of homeowners comes into question.

This is obviously a huge problem.

But the largest problem for the economy could be - not from mortgages themselves - but from the securitizations of those mortgages: 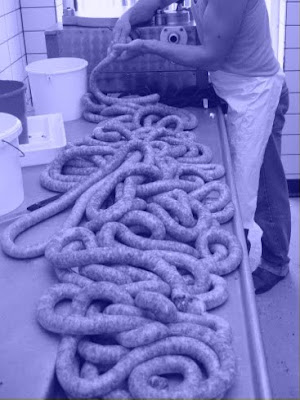 Joshua Rosner - noted bond analyst, and Managing Director at independent research consultancy Graham Fisher & Co - told his clients Tuesday, that the impact from foreclosure gate on the securitized market could be huge. As Shahien Nasiripour reports:

[Rosner] said he believes the paperwork problems regarding foreclosed properties will ultimately be resolved, he wrote that "We have a larger and more significant concern, which, if proved out, could call into question the validity of nearly all securitizations." ***

Rosner said, the current scandal "may give investors an opening to challenge the legality of deals, threatening to unnerve financial markets."

Those challenges, which would result from the revelations unearthed during the foreclosure process, could then be used to investigate the documentation practices that occurred when these mortgages were first given to borrowers. Inflated income levels, fake home appraisals and other lies inserted into mortgage documents -- something Wall Street and Washington have long suspected, but never truly investigated -- could then be used to force big banks to buy back the garbage they peddled in the first place to unwitting investors.

Another possibility is that trustees, who oversee the flow of documents from the originator of the mortgage to the vehicle that holds those documents for investors, may not have properly performed their role, either.

Just four firms dominate the trustee market for mortgage-backed securities in which the mortgages aren't guaranteed by Uncle Sam: Deutsche Bank, U.S. Bancorp, Bank of New York Mellon, and HSBC serve as trustees for 70.5 percent of all such issuance since 2005, according to Asset-Backed Alert, an industry newsletter and data provider. An additional four firms -- Wells Fargo, Bank of America, JPMorgan Chase, and Citigroup -- control 29.1 percent, Asset-Backed Alert data show.

All told, these eight firms have served as trustees for 99.6 percent of all private-label mortgage-backed securities issued since 2005.

Were the document errors now cropping up in a handful of cases "to be found to have resulted from [the] widespread failure of issuers and trusts" to properly handle and transfer documents, "there would ... appear to be a strong legal basis for the calling into question [of] securitizations," Rosner wrote.

The worry centers on the mortgage loan pools created by many of the big banks as they fed the seemingly endless desire for mortgage-backed securities and CDO's (collateralized debt obligations) made from them.

It appears the mortgage content of many of those pools—created when the banks were dominating the mortgage securitization market in 2005, 2006 and 2007—may have been misrepresented. For example, an underwriter may have maintained that 80 percent of the mortgages in the pool were for primary residences when in fact far fewer were for that purpose. Or the underwriter stated that only 10 percent of the pool would be made of of "no-doc" loans—those that include less documentation about the borrower—when in fact the percentage was far higher.

That could be fraud, and if so, the creator of the mortgage pool could be liable. Given that the market for private label RMBS (residential mortgage-backed securities) was $1.5 trillion, the potential liability may be considerable. And while most of the originators of these mortgages are long gone, the securitizers are not.

Joshua Rosner agrees. Rosner told Elliot Spitzer, the banks and rating agencies knew that 28% of the loans which the banks securitized and sold to pension funds and other investors didn't meet underwriting standards. And yet they turned around and processed them into sausage (securitized them) and sold them to investors, representing that they did meet underwriting standards. Rosner said that the rating agencies apparently intentionally avoided looking into this, since the more deals they approved, the more profits the rating agencies got. [For background on the financial incentive of rating agencies to give high ratings to literally anything, see this.] And Rosner points out that - knowing about the high percentage mortgages which failed to meet underwriting standards - the big banks then bet against the housing market. Spitzer called that trading on inside information: The potential securitization problem is why bank stocks are now in trouble. See this, this and this. And as former Managing Director of Goldman Sachs Nomi Prins points out, the Bernanke and Geithner are terrified of a meltdown in the securitization market as well:

The free-market, let the banks do what they do mentality was what allowed them to create a $14 trillion mountain of securities backed by precarious mortgages to begin with.

But the real reason for Geithner’s reluctance about a foreclosure moratorium is that he’s scared stiff about those securities – because even if he won’t admit it, he knows that the bailout wasn’t just about TARP and Bernanke isn’t just an economic savior.

If foreclosed homes couldn’t be sold because of fraudulent paperwork or had to wait for more detailed inspections, you can imagine how difficult selling assets stuffed with faulty loans might be. If it’s tough to find a title for a foreclosed home, think how tough it is to back the related loan out of a pyramid of securities sitting on top of it.

See, the loan that might be analyzed in a foreclosure situation could be part of a chain connecting the underlying home to 20 or 50 different securitized assets, all depending on it for either the interest payments the loan was supposed to provide, or the value of the foreclosure property if those payments stopped (in Wall Street speak, the "recovery value"). If a foreclosed property isn’t selling, it’s not recovering any money back to any asset waiting for it. Think what that can do to the value of toxic assets living at the Fed and the Treasury Department. Kill it.

The reason TARP and all the other subsidies happened was that Hank Paulson, Ben Bernanke, Tim Geithner (the pillage gang) and the most powerful Wall Street CEOs were scared. Banks had stopped trusting each other (no one cared about the person who couldn’t pay their mortgage, or had their home taken, whatever the reason). When there is no confidence in the market, there is no bid for securities, no matter what the reason.

The banks couldn’t pay for all their leverage and they were facing bankruptcy if the system remained seized up. So the gang paid to keep the securitization market going, by finding a home or back-up home for the assets. They did not propose any remotely effective plan to help individuals at the loan level .... They merely enabled the worst practices and excesses to keep going in the name of saving the country from a greater depression, by shifting them to Washington and providing the illusion of demand for them.

Foreclosure fraud is not new. Many sane people and organizations have been talking about fraud for years -- you don’t manufacture $14 trillion worth of mortgage-backed securities and all their permutations and mega leverage out of $1.4 trillion worth of subprime loans in five years without cutting a lot of corners. Banks knew that. But when the value of their assets plummeted, unlike individual borrowers, they got to dump them on the Fed and the Treasury department, while receiving cash injections and guarantees, and cheap money subsidies in return.

See this for more information on the government's ill-conceived effort to prop up the prices of securitized assets. As Congressman Brad Miller told Dylan Ratigan, failure to use subpoena power to audit the quality of the mortgages in the securitized pools held by Fannie and Freddie and to pursue all available legal rights to protect taxpayers from getting stuck with the bill for toxic securitized assets would constitute yet another stealth bailout of the big banks: