Ryan Plan –“Kick it down the road”

On his way to a presidential bid congressman Paul Ryan came forward with a blockbuster budget. The suggestion is that we can trim (get this) $6.2 Trillion out of future budgets. The result of this will be that we get back to long-term fiscal balance. Gosh that sounds good! Actually it's bullshit. We will never see the savings that Mr. Ryan has projected. We will (economically) die first. The Ryan plan just kicks the can down the road for a decade.

Consider the analysis done last night by the CBO (See this article at Zero Hedge) on the Ryan proposals. I want to focus on just the next ten years. 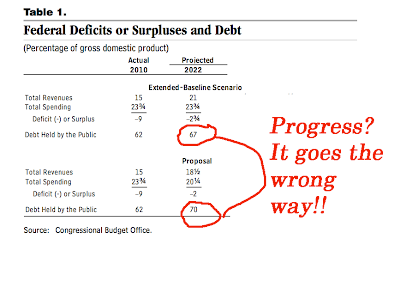 Compare the CBO Baseline to Ryan's plan out to 2022. Note that there is a reduction of both expenses and income. Ryan wants a smaller government and that would be most welcome. But the results don’t look so hot. Under the Ryan plan Debt Held by the Public would be larger than it is today as a percentage of GDP. It would be even larger than the CBOs baseline assumption. What’s so conservative about that outcome?

If adopted the Ryan plan would reduce the deficit as a percent of GDP over the next decade. The CBO thinks we will be at 2 ¾% in ten-years. Ryan gets that down to a mere 2%. That would be great. But it is not going to happen. Mr. Ryan relies on a forecast for economic activity that is simply off the charts. For example, his 2021 unemployment rate is assumed to be only 2.8%. That’s ridiculous.

So how does the Ryan plan do all of that good stuff and achieve those trillions in savings? Easy. The plan makes dramatic changes in a number of critical programs (primarily Medicare). Many of those big changes happen far away in 2022. Some line items:

Starting in 2022, the age of eligibility for Medicare would increase by two months per year until it reached 67 in 2033.

Beginning in 2022, the federal government would establish a medical savings account (MSA) for certain beneficiaries with low income.

People covered under traditional Medicare would, beginning in 2022, have the option of switching to the premium support system.

In the Ryan plan all of the “hard stuff” happens ten years from now. I don’t really know if the proposals that would kick in then would work or not. I suspect that they would make a difference. But, who cares? Under the Ryan plan we won’t survive for another decade. There will be a monetary and fiscal crisis that occurs well before ten years. Sorry Paul, nice effort, but we can’t wait as long as you seem to think. 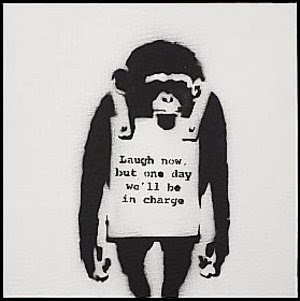