Schumer and Cornyn - "We Agree on Tax Credit"

There was a love fest on ABC’s This Week. The odd couple was Senators Schumer (D.NY) and Cornyn (R.TX).

When Schumer says, ”We have to extend the housing tax credit” Cornyn says, “Chuck and I agree”.

Cornyn went on to make a plug for Senator Isakson’s (R.GA.) bill. This would expand the $8,000 tax credit to $15,000. I t would also make it available to all comers. The existing bill is only for first time buyers.

While Cornyn is talking, Chuck is shaking his head, Yes, yes, yes. 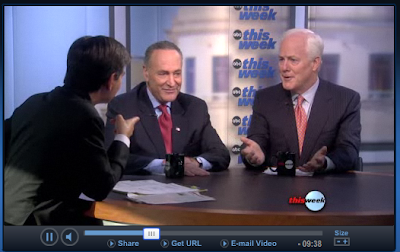 Read this to mean that it is certain that the existing subsidy will be extended. In my view these two making nice on TV means that a form of the Isakson bill is what we are going to get. This is a very significant development.

For the sake of discussion assume we do get a $15k credit. Assume also that the FHA makes available 90% mortgages at low rates (they are currently doing 96.5% LTV, so this is a conservative assumption). The question is how many will take advantage of this and what might be the consequences.

On September 17th the IRS came out with this headline:

There is a backlog on these deals today. It is reasonable to assume that the $8,000 credit could result in 2mm homes being sold in just nine months. Based on this what is an estimate for the number of homes sold with the $15k incentive that is open to all? I think 4 million is a good number. Let’s use 3 million to be conservative.

The average price of a home is $200,000 (also conservative). Using all of these assumptions you get some very big results.

-This translates into a total sale value of $600 billion.

-The direct cost to the government would be $45 billion.

-The total equity required by the private sector net of the subsidy would be $15 billion. The equivalent of only 2.5% down.

-FHA would guaranty an addition $540 billion in new mortgages.


Based on the assumptions the following positives may occur:

-This would be a back door bailout of the GSE’s. It would give them an opportunity to off load some of their REO. It would also reduce costs of short sales that will come in the next year. This only lessens the loss however.

-The FHA would have an explosion of new activity. This premium income would dramatically increase their cash cushion. It would temporarily avoid a bailout of FHA. It would insure that the ultimate bailout costs will be much higher.

-The economic activity related to the sale of 3mm homes will contribute to GDP. For example; the RE commissions will be $30 billion, the mortgage brokers will get $6 billion, The lawyers will collect another $6b in closing costs. This is how America makes money. This class of beneficiaries just takes commission as part of the creation of debt. There is zero residual value to this. It is just pumping up current consumption.

-You have to assume it would benefit the big, publicly traded, homebuilders. How much clout does this group have? Plenty. Senator Isakson’s family owns one of the largest private RE brokerages in the country.

-This could be beneficial for holders of busted MBS. Additional demand for the underlying collateral will create better exit opportunities. While this does not make any of the old crap money good, some smart folks are going to make some dough off of this. It might even benefit the zombies. You can be sure the GS’s of Wall Street will make a buck. More clout.

There are some negatives:

-There is an on budget cost of $45 billion. A very big number. There will be some who appose it. But I think it will pass. Congress is looking for a new stimulus package. This is going to be a part of that. The ‘Bear Hug’ on TV today convinced me.

-In my example 97.5% or about $585 billion will be debt issuance by either Treasury or Ginnie Mae. This would increase the 2010 funding requirement by about 30%. No one cares about this issue. Bernanke still has $500b of Agency buy back power. If they want to do more, there is nothing stopping them.

-This program will have the same effect as the Clunkers program. While the window is open that stimulus is powerful. The existing housing tax credit has been very successful. It is reasonable to assume that a larger, broader program would also bring results.

But as with Clunkers, when the music stops demand stops as well. Given the magnitude of this potential bill the impacts would be very substantial when the program is ended. There will be a great sucking noise in the months that follow the end of this and the other ‘fixes’. We will not QE ourselves out of that one. The sucking noise will be heard around the world.

My guess is that the Isakson bill will come out of the Senate. Congressman Barney Frank (D.NY) has a big say in this. He would do anything that would help the Agencies. He enabled them. So this will come down to the WH.

-Geither and Goolsbee will say yes.

-Summers will carefully describe the pros and cons. He will lean toward a more modest proposal.

-Volker will say no to this.

-Bernanke will end up supporting it. (He doesn’t have a say)

-The political advisors will say, “pedal to the metal”.

“Do a $12,000 cap deal. Sell the lower number as a measure of your fiscal conservatism. Low-ball the estimate of homes sold but leave the door open until 12/1/2010. The old $8k tax credit will be double over budget. Same with this credit. Worry about that later. This plugs some deep holes. It will look like progress is being made. The Dems will carry the mid terms in both Houses and you will have two years of grace.

This debt will be off of Treasuries balance sheet so no one will notice. Anyway, no one cares about that."

It’s a pretty compelling case. This is going to pass.