The Euro/CHF cross closed in NY at 1.3732 Friday. I believe that is an all time low close. I am still scratching my head how this could happen during a week where the Euro did a five big figure move to the upside.

The Swiss National Bank has been intervening in the FX market to slow/stop the appreciation of the CHF against the Euro for the past six months. This week they threw in the towel and will let the Franc float higher. It cost them a bundle.

Philipp Hildebrand took over as the head of the SNB On January 1, 2010. He inherited a policy of defending the strong Franc. He continued the policy from the day he took office. He will suffer the biggest loss in FX history. Hildebrand publicly defended his actions on numerous occasions. He always hid behind the threat of deflation in Switzerland as the justification of his massive purchases of Euro’s. A chronology of this. Note the dates:

This is from an important annual presentation. There is no equivocation here regarding the threat of deflation in Switzerland.

Speech by Mr Philipp M Hildebrand,
30 April 2010.
Any threat to this currency stability would, by definition, have a negative impact on Switzerland, above all if the Swiss franc were to appreciate sharply due to its role as a safe haven currency. The SNB will not, however, allow such a development to turn into a new deflation hazard for Switzerland. For this reason, it is acting decisively to prevent anexcessive appreciation of the Swiss franc.

HILDEBRAND, MAY 11
"We will not allow any excessive appreciation that might generate deflation risks".

Okay, we got that message. Deflation was to be avoided at all costs. But actually those cost got too high. The SNB has foreign reserves of CHF230 billion. Nearly half of total GDP. It comes to CHF 30,000 for every citizen. The policy got out of control.

The SNB has reported a CHF 3b loss from Euro holdings in March. Based on the close today and an estimated Euro 50b intervention in the past 75 days and you have a mark to market loss of CHF 8.4b. That may not sound like a big number, but you have to consider this in the context of Switzerland's GDP which is small. The 8.4b loss for the SNB would be equivalent to a $200 billion loss for the Fed. So actually this is a very big deal.

What does Mr. Hildebrand do? He does a u-turn on the fight against deflation. His words from Thursday:

“The deflationary risk in Switzerland has largely disappeared.”

What? In the past 60 days the risk of global deflation and particularly deflation in Switzerland have increased. With the Euro/Franc at 1.37 and now obviously headed lower deflation is a very real risk for the Swiss. The decision to discontinue the policy of holding down the franc had nothing to do with a risk analysis of deflation. It was about the money. The losses were too big. The impact on the money supply was undesirable.

So Hildebrand went to the big casino on his first day on the job and lost a bundled and continued to double up until he had no chips. The FX market ate his lunch for the biggest ever FX loss that I am aware of.

It is true that some Swiss exporters, farmers and the tourist industry got some benefit from Mr. Hildebrand's efforts. My guess however, is that 80% of his losses went into speculative hands. A nice win for some folks. 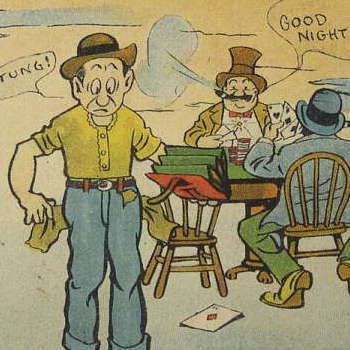