Speculation Does Not Explain High Oil and Gasoline Prices? Please!!

WTI (West Texas Intermediate) Crude Oil futures traded at its lowest in almost two months in New York on Thursday, May 5 in its biggest selloff in two years, plunging 8.6% on the day to below the $100 mark (Fig. 1).  Brent crude on ICE also dropped as much as $12.17, or 10%, which was the largest in percentage terms not seen since the Lehman Brothers financial crisis, and the largest ever in absolute terms, according to FT.

The epic waterfall was partly due to the combination of a strengthening dollar after European Central Bank President Jean-Claude Trichet said he wouldn’t raise interest rates, and a surging U.S. first time jobless claim that sent oil, silver and other commodities plunging.

There has been a long debate about how much of a role speculators play in the oil market.  However, this latest big price move in one day strongly suggests something more than fundamentals is at work.

That is, some big players (i.e. speculators) decided to move out of commodities, either to take profits, or for risk off trades, as crude and gasoline market fundamentals have not changed much since the start of the year to warrant such a run-up of prices in recent months (Fig. 1).

Some, like Ezra Klein at The Washington Post, and Jerry Taylor and Peter Van Doren, senior fellows at the Cato Institute, have suggested that speculators are not the ones causing high oil and gasoline prices.

For example, in this article, Klein partly quoted Michael Greenstone, an energy economist at MIT, and concluded that:

“Speculators make money by pulling oil off the market, putting it in inventory, and selling it later…So if you’re seeing speculation, you should be seeing a massive run-up in inventory. And we are seeing a bit of an inventory bump, particularly in recent weeks. But not enough of one.”

Taylor and Van Doren also drew a similar conclusion in an article at Forbes stating that since there’s not a massive increase in oil storage to cause a physical supply shortage, so do ‘put away the torches and pitchforks’ as speculators are not to blame for the rise in oil and gasoline price.

I guess all four gentlemen live right next door to the U.S. Fed in the ivory tower and just as detached from reality.

First of all, taking a long position, as in Greenstone's 'store then sell' scenario, is not the only way to 'speculate' in the oil market.  Another way is by placing short bets, or a combination of long and short positions.  Short bets could cause huge price spikes and volatilities if those speculators have to cover their positions due to an unexpected and sudden rise of the underlying commodity price.

With the current price momentum, more short speculators will be piling in to put even more downward pressure on crude oil in the coming days, particularly after QE2 ends in June, and no more stimulous on the horizon.

As for the notion that the only link between speculative activities and oil market is with oil storge, here is a quick lesson on the modern art of speculation. From Bloomberg:

“Less than 1 percent, or 3,248 crude futures contracts, was delivered in 2010, compared with the average open interest of 1.34 million contracts during the same period, according to Nymex and data compiled by Bloomberg. There is no physical delivery against Brent oil futures contracts traded on the London-based ICE Futures Europe Exchange. “

While there are some long speculators (typically big players) doing the good old contango trade--'store now and sell later'--as described by Greenstone, there's a whole brave new world via oil ETFs such as USO and BNO to party in speculation.

These commodity ETFs are futures-based that takes no physical deliveries, but may accumulate huge long positions due to investment fund inflow, thus influencing market prices, particularly during their monthly contracts rollovers.

So this is the New World [Paper] Order of Crude Speculation….no physical ‘putting in inventory’ necessary.  Furthermore, there is this tip bit from FT.com dated May 5:

“CME Group, operator of the Nymex exchange, touted open interest records not only for crude oil but the dull world of natural gas, where a flood of new supply has kept prices listless. This, along with a plunge in silver this week, suggests a wall of investor money flowing indiscriminately into and out of commodities.”

In essence, Crude, along with almost all other commodity markets, has become such a huge paper palace that almost every participant is a speculator, long or short--where you can buy, sell, speculate, and could ‘own barrels’ without them being actually ‘stored’. And through that process, speculators bid up prices, take profits, on any kind of market event—be it real, hyped, or 'rumored'--but no one has to really put anything  in inventories.

Well, on the supply side, that “bit of an inventory bump’ pushed inventory level at Cushing, Oklahoma, which is the delivery point of NYMEX WTI futures contracts, to around 41.9 million barrels the week ending April 08 (Fig. 2). That was the highest ever since the EIA started tracking Cushing inventory in 2004. Crude oil storage at Cushing remained close to the record high sitting at 40.5 million the week ending April 29.

Crude stockpiles are also rising in other U.S. regions as well. The latest crude inventory report from the government showed stockpiles rose 3.42 million barrels to 366.5 million the week ending April 29, the highest level since October.

On the demand side, gasoline demand in the U.S. has been on a steady decline since last August, and dropped another 2.2% in the week ended April 29 to 8.94 million barrels a day, according to the U.S. EIA data. On a four-week average, gasoline consumption was 1.9% lower than a year earlier.

RBOB gasoline futures on Nymex, on the other hand, had gained 35% this year through May 4, far outpacing WTI as speculators bid up petroleum product futures mimicking movement in the Brent marker (Fig. 3), which historically traded at $1-3 discount to WTI, has flipped into a premium. That premium reached a record of $18.50 in February, 2011.

Brent is traded on ICE--a speculator haven--as it is essentially unregulated, relatively opaque, and a less liquid market (although this is in dispute between ICE and CME). 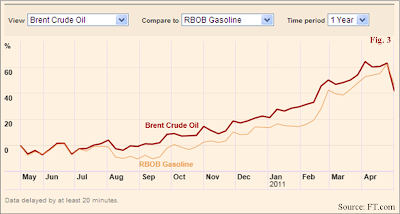 According to AAA, as of May 6, the national average gasoline price is less than 2 cents shy from $4 a gallon, while 14 states are already paying $4 or more a gallon at the pump.  Since it typically takes about two to three months for the RBOB gasoline futures pricing to hit the gas pump and consumers, further pump price increase and demand destruction seems inevitable (Fig. 4). 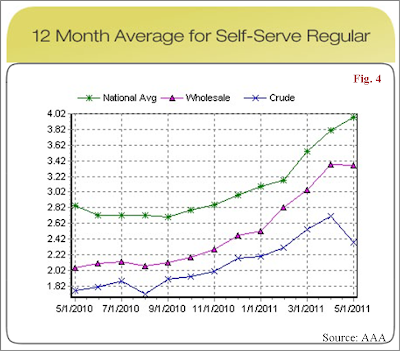 To sum up, the recent irrational run-up of oil and gasoline prices could be attributed to the following major factors, and all of them, with the exception Fed’s QE2, which is the culprit of adding jet fuel to the speculation fire, could be traced back to speculators:

These are pretty much the same forces, and most likely the same speculators, driving oil up to $147 a barrel less than three years ago in 2008.  A certain degree of speculation is actually essential and healthy for a normal capital market, however, excessive liquidity and speculation leading to an abnormal market like we have right now would only kill demand, and hurt the global economy.

Saudi Arabia recently estimated that about $25 a barrel of speculation premium has been added to the current oil price.  Separately, a study co-written by a CFTC commissioner, Bart Chilton noted that about 64 cents a gallon can be attributed to over-speculation, reported The Seattle Times.

So while quantifying the ‘speculation premium' may not be an exact science, it is entirely premature to dismiss the significance of speculation in the current price of oil and gasoline using physical oil storage as the main thesis.