Yes, that is a correct headline. In its annual report to Congress last week SS acknowledged that its condition had sharply deteriorated in 2010. This sentence from the report is all you really need to know about what the status is:

Note that this is a present value calculation. The total unfunded obligation has grown by a cool $1.1 trillion in just a year. In other words, if we had to shore up the TF to the level that it was just a year ago the USA would have to write a check for $1.1 T. The unfunded status was a disaster a year ago at $5.6T, it got worse by 20% during 2010. The cost of “fixing” SS goes up as a result. To put things in balance one of these two extremes are now required:

If you think this a ho-hum result, think again. If benefits get cut across the board by 14% we will have many seniors who will fall into a hole. An increase in payroll taxes of 2.15% is simply not going to happen anytime soon. There is no support in Congress for an increase like that. It would mean that taxes on all workers/employers would have to go up by $110b in the first year and rise every year thereafter. This would be a very regressive tax increase that hurts lower end workers the hardest. For 2011 there is already a payroll tax holiday of 2%. If the required increases take place in 2012 it would mean a 3.2% reduction in wages. Kiss the economy goodbye under that scenario.

I underlined the TF’s use of the words immediate and permanent as this language highlights the fact there can be no delaying on the fixes necessary at SS. One thing that you can take to the bank is that nothing will happen with SS in 2011 or 2012. This is a problem that will simmer for at least another 24 months. This delay will prove to be very costly for all involved. Both the required tax increases and/or the required cutbacks will be much larger than today.

The NPV of the unfunded liabilities at SS are now growing by at least $100b a month. One would think that this massive cost would spur some response in D.C. Don’t count on it. As a result, SS is going to come off the rails in about two years. 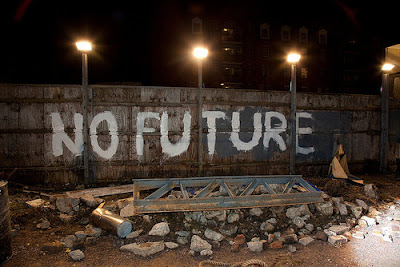