Stagflation 2011: Why It Is Here And Why It Is Going To Be Very Painful

Stagflation 2011: Why It Is Here And Why It Is Going To Be Very Painful 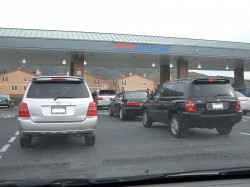 Normally inflation is a sign of increased economic activity, but when the basic commodities that we depend on to run our economy (such as oil) go up in price it actually causes a slowdown in economy activity. When the price of oil goes up high enough, it fundamentally changes the behavior of individuals and businesses.  Suddenly certain types of economic activities that were feasible when oil was very cheap are not profitable any longer.  When the price of oil rises to a new level and it stays there, essentially what is happening is that more "blood" is being drained out of our economy.  Our economy will continue to function when there are higher oil prices, it will just be a lot more sluggish.

Today, the price of WTI crude soared past 100 dollars a barrel before closing at $98.10.  The price of Brent crude increased 5.3 percent to $111.25.  The protests in Libya are certainly causing a lot of the price activity that we have seen over the past few days, but the truth is that oil has been going up for a number of months.  Right now we are only seeing an acceleration of the long-term trend.

Things are likely to get far worse if the "day of rage" planned for Saudi Arabia next month turns into a full-blown revolution.  Up to this point, the revolutions that have been sweeping the Middle East have been organized largely on Facebook, and now there are calls all over Facebook for the "Saudi revolution" to start on March 20th.

That date is less than 4 weeks away.  If Saudi Arabia plunges into chaos, the price of oil is going to go through the roof.

A rapidly rising price for oil is really bad news for the U.S. economy, because it is going to mean lots of inflation.  Unfortunately, this also comes at a time when the economy is also feeling the inflationary effects of more quantitative easing by the Federal Reserve.

It adds up to stagflation.

In economics, stagflation is the situation when both the inflation rate and the unemployment rate are persistently high.

If American families have to spend $10 or $20 more each time they visit a gas station, that means that they are going to have less discretionary income.  They won't be able to spend as much at the stores.

Not only that, but since the price of oil affects the price of almost everything else, Americans will find that their dollars have reduced purchasing power.

An oil crisis would force American families to stretch their already overburdened budgets even farther.

So where is the price of gasoline going from here?  Well, the average price of gasoline in the United States is rapidly sneaking up on the $3.20 a gallon mark.  Almost everyone believes that it is going to be going significantly higher.

Tom Kloza, the chief analyst for the Oil Price Information Service, was recently quoted in USA Today as saying that he believes that the average price for gasoline in the United States will reach somewhere between $3.50 and $3.75 a gallon by April.

If gasoline becomes that expensive and it stays there for a while, it is going to seriously start affecting the behavior of American businesses and American consumers.

"Remember when oil was last at $140 (a barrel), Americans reacted and cut the amount of miles they drove."

Can you imagine what it would do to the economy if millions of Americans start sitting in their homes instead of doing their normal amounts of driving and flying?

In addition, one of the biggest problems with a higher price for oil is that it would cause our trade deficit to explode.  According to the U.S. government, more than half of the oil that we use is imported.  So every month we send the rest of the world billions and billions of our dollars and they send us massive amounts of oil.  We rapidly consume all of the oil they send us and we continually need more.  So we keep sending larger and larger amounts of money overseas and they keep sending us larger amounts of oil.  In the process, our national wealth is being drained at an astounding rate.  It is one of the greatest transfers of wealth the world has ever seen.

When the price of oil rises substantially, the transfer of wealth accelerates.  This is a very bad thing for the U.S. economy.  For example, when oil prices were above $100 a barrel back in 2008 our trade deficit for the year was almost 700 billion dollars.

It would be great if the Middle East would settle down and oil prices would start declining because that would really help out the U.S. economy.  Unfortunately, it does not look like that is going to happen.  Instead, it appears that we are steamrolling directly towards stagflation.  Anyone that lived through the stagflation of the 1970s knows that it is not a lot of fun.

The cold, hard reality of the matter is that without cheap oil our lifestyles are going to change.  Our economy was not set up to run on expensive oil.  If oil moves well above $100 a barrel and it stays there it is going to bring about significant societal changes.

For the rest of 2011, the price of oil will be the number one economic indicator to watch.  If it gets too high it is going to be an absolute disaster for the U.S. economy.