The case against UBS is over. The Justice Department appears to have won this one. A total of 4,450 out of a total of 52,000 names will be divulged to either DOJ or IRS. Based on what has been presented it would appear that the other 48,000 names that were not disclosed either had the money sent back to a bank in the Sates (equivalent of full disclosure) or they had hired a lawyer and confessed their sins to the IRS.

According to the DOJ the 52,000 names had a total of $15 billion in their black accounts. A sizable amount of money. The question that has been hanging in the air is how much money is still in Swiss black accounts that has not been flushed out at this point? How many other Americans have accounts that were not with UBS? How many accounts are there from non-US names? What is an estimate as to the size of this problem?

“Switzerland has become a paradise for foreign capital on which tax is not paid. The uproar from foreign governments is understandable.” These are not the words of a critic of the banks, but of private banker Konrad Hummler. He says that around 30%, or CHF 1,000 billion, of the CHF 2,800 billion or so of foreign assets in Swiss banks is untaxed “black money”.

Mr. Hummler probably knows as much about the topic of black accounts in Switzerland as anyone. His Bio:

Konrad Hummler is managing partner of Wegelin & Co., private bankers, and has acted for many years as personal advisor to the chairman of the board of directors of the Union Bank of Switzerland (UBS). He serves as a colonel in the general staff of the Swiss Army.

Mr. Hummler has put a number of nearly 1 Trillion dollars on the problem. This is much higher than any estimate that I have seen before. I thought it could be as high as $500b. It appears that I was understating things by a factor of 2. Some perspective based on the comments by Mr. Hummler:

-The average US account balance at UBS was $300,000. ($15b/52k). Extrapolating from that number one gets an estimate on the total number of black accounts at 3.3 million. Based on this calculation a range of estimates on the total number would be between 2 and 4 million.

Mr. Hummler’s comments are unlikely to go unnoticed by the global taxing authorities. The idea that there is this much money waiting to be claimed by the host countries makes it certain that the attacks against Swiss banks will continue far into the future. Everyone will want their share of $1 Trillion.

I believe that the trees are shaking and the leaves falling on this issue as I write. I recently reviewed a letter from a large Swiss private bank (not Wegelin & Co) that was sent to a US client it reads, in part, as follows:

“To ensure transparency toward the IRS, we would ask you to sign the enclosed form W-9 and return it to us by 30 September 2009. We will then forward form W-9 to our US depository, which will in turn disclose your holdings to the IRS.”

While this letter may not represent the thinking and action of other Swiss banks it is likely that they will be forced to follow suit in the not too distant future. Mr. Rolf Ribi the author of the story in Swiss Review states in his lead in: Banking confidentiality is facing, “the beginning of the end”. I would disagree with Mr. Ribi. We are far from the beginning of this process. The end will come much sooner than is expected. Black accounts in Switzerland are a thing of the past.

A Hat Tip to Mr. Hummler for providing this insight. 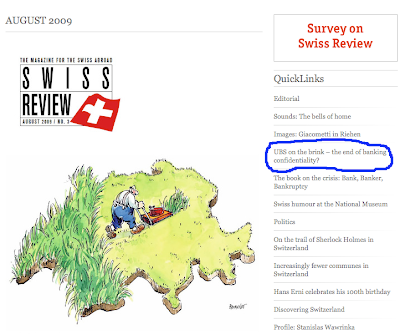 Posted by Bruce Krasting at 4:44 PM