Is the US Jobs Crisis Here to Stay? 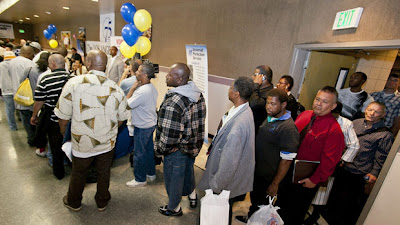 John Talton of the Seatle Times reports, Why the US is in a jobs crisis:

The situation is nicely encapsulated by economist Nouriel Roubini's tweet this morning: "US economy now close to stall speed. From anemic recovery to tipping point to stall speed and growth recession. Is a double dip next?"

The economy only created 54,000 jobs last month. It takes between 125,000 to 150,000 net new jobs a month just to keep up with the organic numbers of people entering the labor force, much less make up for the losses of the Great Recession.

Put another way, by the blog Zero Hedge, the U.S. would have to create 250,000 jobs a month for 66 months just to return to where unemployment stood in December 2007 by the end of President Obama's second term. But why is job creation broken?

It's an area where we need urgent research and sober debate. I can think of these reasons:


For all the political theater, America has a jobs crisis much more than a debt crisis. Until it fixes the former and creates broad-based growth, it can't meaningfully address the latter.

I totally agree with many points expressed in this article, especially the last point on America's jobs crisis being far more important to fix than the debt crisis. Right-wing pundits have been busy spinning the debt crisis but the reality is unless there is a meaningful and sustained jobs recovery, the debt crisis will never be addressed. And don't believe anyone who tells you otherwise.

How do I know this? Just look at Greece. Austerity is a disaster, pushing their economy to the brink. Greece doesn't have a manufacturing base and relies almost exclusively on tourism and shipping as the pillars for its economy. Young and smart Greeks are leaving the country not because they want to, but because there are simply no opportunities in the private sector. Greek policymakers are doing absolutely nothing to address serious structural issues in their economy.

That brings me to my next point. The real crisis behind the jobs crisis in the US and pretty much the rest of the developed world is the leadership crisis. Politicians and policymakers are spewing the same old ideas. Liberals want to increase deficit spending while conservatives want to decrease taxes and cut spending. Same old, same old. There is nothing new in these policies based on ideology. Nobody has the courage to take on interest groups and admit that there is a fundamental problem with the current trajectory.

What really worries me from a social perspective is that the disconnect between the financial system and the real economy is widening income inequality. QE2 hasn't done much for the real economy yet, but it's been a boon for traders and money managers. The financial oligarchs couldn't care less about what's going on in the real economy, and neither do America's corporate titans. All they care about is their total compensation which continues to rise to record levels while millions struggle with unemployment.

Unless something is done to address structural issues in the labor force, including the ever widening income gap between the haves and have-nots, a whole generation of workers will suffer from chronic unemployment and along with it, loss of job skills, loss of dignity, and most worrisome, chronic mental and physical health problems that will put additional pressure on public spending.

Now is the time for our political leaders to step up to the plate and address the jobs crisis. If they don't act quickly and forcefully with fresh and courageous ideas that work, then capitalism as we know it is doomed. If this sounds too "Marxist" for you, then you're ignorant of history and how human beings always repeat the same mistakes. Somewhere down there, Marx is grinning in his grave. I leave you with an interesting discussion from ABC's This Week on the prospects for the class of 2011.