The Value of Losing Money? 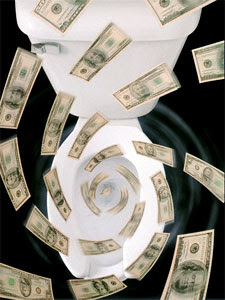 On Saturday morning, I caught a glimpse of CNN's Dr. Sanjay Gupta interviewing Dr. Joseph Maroon, a neurosurgeon at the University of Pittsburgh Medical Center and a team physician for the Pittsburgh Steelers. Dr. Maroon is a member of the NFL's concussion policy committee, which has recently been criticized by the House Judiciary Committee for inadequate research and ethics related to player concussions.

But I'm not covering any NFL controversy here. What caught my attention is that Dr. Maroon hit a brick wall years ago when he experienced the three D's: death of his father, divorce, and a deep depression. He got on the treadmill one day and started running. He felt so good that he said it was the first night he slept well. And from then on, he was convinced that exercise was the key to maintaining his mental and physical health. He's now a 70-year-old ironman competitor (unfortunately, controversy still hounds him).

What does this have to do with the value of losing money? Hold on, I'm getting there. I also remember an interview with George Soros (think it was with Charlie Rose) where he was discussing when he graduated from London School of Economics. He was sitting in some corner in London watching people go by and thinking that he's broke and in debt but "there's only one way to go, up".

Some of life's most valuable lessons are taught to us when we hit a brick wall. You don't see it when you're in your personal hell, but typically that's when people find out what they're made of. I remember when I lost my job back in 2006, then separated from my wife in 2007, and my health was deteriorating fast. I hit a major brick wall. Had it not been for the support of my family and close friends, I would have still been stuck in a rut.

I also remember what Tom Naylor, a professor of economics at McGill and close friend of mine, told me back then: "You lost you job, lost your wife, losing your health, the good news is you hit rock bottom". Then he gave me some wise advice. "Take out a piece of white paper and start writing down all the worst possible things that come to your mind. Write everything down: you'll become severely handicapped, you'll never get another job because the pension pricks are blacklisting you and sending you nasty legal letters, the mob is looking for you, no woman will ever want you and you'll never get laid again for the rest of your life. Write down every terrible thing that comes to your mind."

So I did it. Then I asked him what am I suppose to do with this sheet containing all these terrible thoughts of mine? He told me to put it away and look at it after a year has gone by. I asked him "how's that suppose to help me?" He replied: "Because when you look at it after a year, you'll laugh at how silly your thoughts were." And then he told me something else which I'll never forget: "You don't see it now, but with this blog, you have tremendous leverage and the pension pricks are scared of you. Use this leverage to your advantage and write your own ticket in life."And that's exactly what I've been doing ever since. I've toned it down, remaining as professional as possible, but I continue to blog on pensions and financial markets.

Now let me get to my topic, the value of losing money. During a recent lunch with my former boss at PSP, Pierre Malo, we talked about what we value most in life. In our previous lunch, Pierre and I discussed process over performance. In a nutshell, we believe that too much attention is being paid to performance and not enough to process. The way investment managers achieve their performance is a lot more important than overall performance and yet very few institutional investors pay close attention to process until it's too late.

Pierre also talked about luck in investment management. I used to go into his office every morning and ask him "where is the US dollar going today? What about the euro or CAD?". He would take out a coin from his pocket and say "you tell me". He doesn't believe in short-term market predictions. He told me over lunch, "Anyone can be lucky, even over a long period, but that doesn't make them a good money manager. And the worst thing that can happen to anyone is start making a lot of money off the bat".

I then shared a personal investing story with him. After I got fired from BCA Research (alas, I've been fired a few times but always managed to land on my feet!), I started day trading stocks, focusing on tech stocks (1999). I was also buying out-of-the-money call options on these tech stocks and making good money. I then joined the National Bank Financial as an economist but continued trading options. I wanted to get rich quick and retire early.

I then learned firsthand the value of losing money. I bought cheap out-of-the-money call options on Nortel's stock the day they were reporting earnings. I laid down $10,000 of my money, which was a substantial amount of my portfolio back then, and waited for the earnings release after the closing bell, confidently predicting that Nortel was going to kill the estimates and the stock would fly higher. I was expecting windfall gains on those call options.

But that earnings release was a disaster and from there on, the rest is history. Nortel took me, and hundred of thousands of other small and large investors to the cleaners. I never forgot the pain of losing that money, essentially gambling it away. I had no clue whatsoever what I was doing. It took me years after that debacle to learn how to trade properly and I'm still learning every single day. I now avoid options preferring to buy and hold a concentrated portfolio of stocks. I prefer focus on a few eggs than a diversified portfolio of eggs (read my comment on the big secret).

In my follow-up comment, I will discuss how I invest my money, using publicly available information on what elite hedge funds are doing and other information. We are all in the information arbitrage business, and it's how we use this information that will enable us to limit our losses and allow us to make money in these crazy markets dominated by macro events, high frequency trading and large hedge funds.

The point of this comment was to let you know that there is value in losing money. Even the best hedge funds lose money but the top funds will adjust and learn from their mistakes. That's exactly what each and everyone of us should be doing. Finally, please note I corrected my donation button at the top right hand side of my blog, right under the pig, so it should be easier to donate via your bank or credit card. I appreciate all donations and plan on earning my money one donation at a time.