Will China Save the Eurozone? 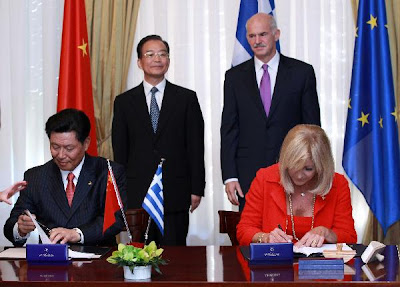 “China has already bought and holds its Greek bonds,” Wen said in joint comments with Papandreou today, which were carried live on state-run ET-1 television. “It commits, very positively, to buy new bonds to be issued by Greece.”

Greece received a 110-billion euro ($151 billion) bailout from the EU and International Monetary Fund in May to avoid default. The country, which has been locked out of international credit markets, plans to issue new bonds in 2011.

In the first visit to Greece by a Chinese premier in 24 years, Wen said he wants to signal a vote of confidence in Greece and the European Union in overcoming the international financial crisis.

“With our common efforts the total mass of imports and exports between the two countries in the next five years can double to $8 billion,” Wen said. He called on Chinese businesses to invest in Greece.

Papandreou is seeking investment to help an economy that his government forecasts will shrink 4 percent this year and 2.6 percent in 2011. He pledged austerity measures worth about 14 percent of gross domestic product over four years in exchange for the loans from the EU and IMF.

Wen said a $5 billion shipping fund will be set up to tighten relations between the countries’ two maritime industries and facilitate the sale of Chinese vessels to Greeks.

The two leaders will today visit Piraeus Port, Greece’s biggest, where Asia’s third-biggest container terminal operator has a 35-year concession to run some operations. China plans to deepen its Piraeus investment to move 3.7 million containers a year by 2015.

Wen will speak in the Greek parliament on Oct. 3, Ambassador Luo Linquan said in an interview with China’s state- run news agency Xinhua.

In June, Greece and China signed 14 agreements in fields including shipping, construction and telecommunications during a visit by Vice Premier of China Zhang Dejiang.

The world's nations need to coordinate their economic policies for global recovery to find a sure footing, Chinese Premier Wen Jiabao and his Greek counterpart George Papandreou said in a joint statement.

"The global economy shows signs of gradual recovery but many uncertainties remain," the two leaders said in the statement, issued on Saturday by Papandreou's office after the two men met in Athens.

"To this aim, it is necessary for each country to strengthen coordination of their macroeconomic policies for the global economy to recover fully," the statement said.

China supported EU efforts to increase supervision on credit rating agencies and set up an independent European one.

"The Chinese side supports the initiatives of EU member states' leaders to strengthen supervision and publish information on credit agencies, as well as the creation of an independent European credit rating agency," the statement said.

China and Greece also expressed their opposition to trade protectionism.

"Promoting the Doha trade talks is an essential step to open up the world economy and strengthen growth," it added.

Wen and Papandreou attended the signing ceremony of 13 deals after their talks, which covered areas concerning cooperation in maritime transportation, loan, telecommunication, export and cultural exchanges. The two countries also issued a joint statement on deepening their comprehensive strategic partnership.

Here is my take on these developments. First, China is smart to invest in Greece now. They are seizing a golden opportunity to develop a strategic partnership within the heart of Europe. Greece's ports will serve as a hub for Chinese goods -- another gateway into Europe.

Second, Greek bonds are ridiculously cheap. Ten-year bonds trading at 11% is simply outrageous. The carry alone justifies taking a position. I just returned from Greece and while things are bad, they're nowhere near as bad as mainstream media make them out to be here in North America. The Chinese and Norwegians will make money on Greek bonds whereas North American pensions shunning Greek debt fearing reputation risk will lose out big. Again, 11% on ten-year bonds is ridiculous and it tells me that a lot of so-called experts don't have a clue about how the Greek economy operates or how to properly assess the risk of a Greek default or restructuring.

Third, China is sending a strong signal that it's willing to help out the Eurozone. I wouldn't be surprised to see other southern European nations sign strategic partnerships with China. Don't forget, the Chinese are already investing billions in Africa, and they're a leader in solar energy. That's another reason why I'm bullish on solar and why I believe China is making the right moves to eventually be a key player in the renewable energy sector. In the future, I see Chinese backed solar farms in Africa, Greece and other southern European nations selling energy to the rest of Europe.

Finally, this is bullish for stock markets and risk assets. Jittery investors were flocking into the bond market fearing the worst. It was a complete overreaction. China is on the same page as the Fed, meaning reflate & inflate to avoid global deflation and social unrest at home. Stay long stocks, but pick your sectors well or you'll underperform your indexes.