Will Pensions Ever Recover? 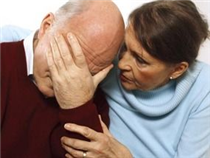 Karen Mazurkewich reports that according to a survey, plan sponsors worry about pensions:

The swell of negative pension news continues. RBC Dexia released a poll Monday revealing that the majority of Canadian plan sponsors are pessimistic about the future of their pension plans.

According to their survey, 89% of defined-benefit plan sponsors are concerned that the pension system is poorly positioned to deliver on its promises.

Just weeks before the Dec. 17-18 meeting in Whitehorse between the provincial finance ministers and Jim Flaherty, Minister of Finance, in which pension reform will be a major topic, the RBC Dexia results serves as yet another warning about the problems inherent within the system.

The biggest concern expressed by respondents is investment risk. With markets in a free fall last year, 41% of plan sponsors expressed fears over bad returns. Not surprisingly, their second-greatest fear is that plans will not generate sufficient returns to offset obligations.

Despite concerns over the pension system, the survey revealed some contradictions. Despite their overwhelming pessimism, 72% of respondents also rank Canada’s pension system as equal to, or better than, other systems globally, and 8% believed our system to be inferior to its global counterparts.

“There is recognition that it could be worse and (we) don’t want to throw out the baby with the bath water,” said Scott MacDonald, head of pensions, financial institutions and client service for RBC Dexia. But he also said the fact that 20% of respondents had no opinion on Canada and other approaches out there reveals “a community out there lacking context.”

The RBC Dexia poll comes on the heels of another plea last week by Keith Ambachtsheer, director of the Rotman International Centre for Pension Management. Using C.D. Howe Institute as his pulpit, Mr. Ambachtsheer argued that Canada’s supplemental pensions, such as the Canada Pension Plan, Quebec Pension Plan and Old Age Security, “are increasingly showing (their) age,” and need to be updated.

“Pension plan designs should target a post-work standard of living that is adequate, achievable, and affordable,” Mr. Ambachtsheer said.

Several provincial studies prove that almost half of middle and high-income workers in this country will not be able to maintain their desired standard of living in the next 10 years, he says.

In addition to arguing that all forms of retirement saving should receive equal tax, regulatory, and disclosure treatment across all sectors of the workforce, Mr.

Ambachtsheer has called for national, regional or group-based supplemental pension plans for workers without an employment pension plan.

“So far, three proposals to increase pension coverage have gained currency in Canada over the course of the last year,” said Mr. Ambachtsheer. The first proposal has been made in various forms by Canada’s insurance and mutual-fund industries. The second involves an expanded Canada Pension Plan, while the third option is the creation of a new supplementary pension plan either at a regional or national level.

He hopes the new Federal-Provincial Working Group on Pension Reform will hammer out a supplementary pension fund solution so Canadians will receive better coverage upon retirement.

“This is not a pie-in-the-sky pension vision, but an achievable big idea whose time has come."

Mr. Ambachtsheer argued in his paper published by the C.D. Howe Institute that Australia and other European countries such as the Netherlands have solved their pension coverage problem by requiring all workers to become members of funded workplace pension plans.

The financial crisis saddled the world's 100 largest companies with a record 220 billion euro (199 billion pounds) pension shortfall at end-September, up from 20 billion at the end of 2007, a study released on Monday said.

The survey, compiled by consulting actuaries Lane Clark & Peacock LCP.L, found that the average pension deficit for companies in the FTSE Global 100 index increased by 1.6 billion euros during 2008.

The report highlighted Royal Dutch Shell, IBM and General Electric, which each saw deficit increases of more than 15 billion euros, contrasting with surpluses reported in 2007.

LCP said that asset price gains during 2009 stemming from recovering markets had not compensated for falling corporate bond yields which are used to measure pension liabilities in company accounts.

Not surprisingly, IFAonline reports that a quarter of occupational pension schemes in the UK lack a strategy to monitor and mitigate risk, according to The Pensions Regulator:

Despite nearly three quarters of schemes reporting they have a risk process in place, only two thirds of trustee boards are very confident they are properly guarded against specific risks.

Just two fifths of schemes (43%) have confidence in the controls relating to data transfer, though trust in internal management of fraud was higher with two thirds (66%) being very confident in the process.

Larger schemes were much more likely (91%) to have a risk strategy compared to only 59% of smaller schemes, the figures from the Pensions Regulator's fourth annual governance survey suggest.

Default occupational schemes remain popular, however, with nearly two thirds of members invested in such a fund, though this may reflect employee inertia rather than the fund being suitable for the majority of members' investment needs and attitude towards risk, says the regulator.

The regulator today launches a campaign to encouraging good governance and administration and better management of pension scheme risks.

"Scheme members entrust their pension savings into the hands of others to a total estimate of more than £1trn in assets, often for decades of their working lives.

"This campaign is designed to build on progress made in recent years, recognising that trustees perform a critical role in protecting and managing pensions, and are faced with challenges in this difficult economic context."

The nation's pension funds could take a significant amount of time to recover from credit crunch-induced losses, Trustnet has suggested.

According to a report from the investment specialist, the schemes have yet to return to pre-crisis levels - although many have posted impressive gains recently.

A total of six funds have registered a 100 per cent-plus increase over the year to November 2009.

However, pensions suffered across-the-board losses from near- unprecedented stock market conditions with the credit crunch at its height during 2008. For example, the FTSE 100 stocks index dropped 35 per cent across the year and reached its lowest level for over a decade this March.

Speaking to Trustnet, Neil Veitch, manager of the SVM UK Opportunities fund, said: "As economies have stabilised and risk premiums reduced, it is earnings that will be the next driver of the market over the next six months.

"We are now looking for more sustainable growth or cyclical stories where there are internal or external drivers, preferably both, to bring these earnings through."

Diminished pension fund values could result in some retirees using options to boost their incomes, such as equity release plans.

Finally, I end this post on a sobering note. Andy Davies of Fair investments reports that pension funds hit by recession:

More than a third of consumers believe their pension funds have been depleted by the recession, Aviva has revealed.

Aviva's research claims that the recession has also forced one in ten of its customers to look for additional ways to supplement their retirement income to ensure they can maintain the quality of life they have become accustomed to.

Meanwhile, as a result of the recession, 23 per cent of people said that in the past year they have had to cut their outgoings to enable them to save enough for their retirement.

Aviva's poll of more than 1,200 people approaching retirement also revealed that a quarter of people have concerns about how they will fund their retirement in the future.

Around one in three people are worried about how rising living costs will impact them in years to come, while 19 per cent of savers are concerned that their pension pot will not be worth as much as they had originally planned.

The most worrying figure, according to Aviva, is that five per cent of the respondents – the equivalent of more than three million Brits, admitted that they will rely on part-time work to fund their retirement.

Commenting, Brian Bussell, director of pensions at Aviva, claims these figures highlights how "important it is for people to start saving for retirement as early as they can".

"Understandably, the recession has forced people to think about their retirement income and many have realised that they may not have sufficient funds to live through their final years in the comfort they have grown accustomed to," he said.

Urging people to start saving for their retirement as early as possible, Mr Bussell added: "We would encourage people to make use of their full range of assets, including investments, state benefits, pensions and property, to make sure that they aren't effectively cheating themselves out of the lifestyle they could enjoy."

It's more than just about urging people to save more. The road to recovery for pensions will be a long and arduous one. Plan sponsors are right to worry because what goes up fast can come down even faster. And that means the global pension hole will get wider as we move along, leaving far too many people to fend for themselves at a time when they should be enjoying their retirement.