Jon Hilsenrath at the WSJ had an interesting article titled “Fed’s Focus: How to Sell Its Mortgage Securities” I read Hilsenrath. He writes well, he knows his stuff and he is connected. I think he is blowing “Fed Speak” at us with this one. Here’s the link, you decide.

Reading the article I was left with the impression that JH had used both public information and the thinking behind some ‘off the record’ conversations with Fed officials. The Fed does not tell what it is going to do unless it wants to. Ever. Not even to Jon Hilsenrath. So when you see this “Fed speak” it should be considered in that light

The article is a rehash of the Feds balance sheet dilemma. It raises the question of, “What’s the Fed going to do with all that paper it just bought?”

On reading, you are supposed to get this warm feeling that the Fed is acutely aware of the size, scope and significance of their QE actions. That these steps were just a ‘natural’ consequence to the “Emergency” and now that we’re returning to normal the “Emergency Measures” are going to be unwound. No problem. They have this completely under control.

The article (I think) leaks the information that next weeks Fed meeting will continue the ZIRP Forever language (at least six more months). It also confirms that there will be some more of the “experimental” reverse repos in the coming weeks.

JH points to the public comments of some Fed members indicating that that they actually want to sell some of what they own. To me this is just noise to make it appear that there is a real debate. There will be no Fed selling of MBS for at least 24 months. The quote from Bernanke on this topic:

"I currently do not anticipate that the Federal Reserve will sell any of its security holdings in the near term, at least until after policy tightening has gotten under way and the economy is clearly in a sustainable recovery."

This is completely open ended. He might as well have said, “We will start selling when the terror threat level is returned to green.” Don’t hold your breath.

So the article leaves us with the inescapable conclusion that the Government effort to prop up the mortgage market is now completed and the next phase is going be a period of relative balance sheet stability followed by a plan to unwind the mess. That is peachy news and we should all be very happy, right?

Well I am not. Some facts here. The Fed dramatically (and predictably) slowed its purchases of MBS in March. They have made no new purchases since then. So they have lived up to the bargain, but the other arm of the federal financial puzzle started buying in MBS at just the time the Fed stopped. The Treasury department through Fannie and Freddie started a program that commenced in March and will continue for some time to come where they will be buying in $100rds of billions of MBS. So the beat goes on and on. From our friends at Fan and Fred:

F/F will buy in defaulted mortgages and pay the holders of the MBS cash. This will come to the investors in the form of a pre-pay of principal. It is very normal for a portion of the principal to be returned to the investors on a monthly basis. The F/F steps just accelerate the process. When the investors (big funds) get the principal back they (usually) turn right around and plow it back into new MBS issues.

The steps taken by F/F are completely different in form to the Fed’s purchases of MBS but in substance they have the same affect. It decreases the outstanding mortgages, and therefore influences mortgages spreads. Keep the game going for a bit longer.

I admit that I am an old cynic and generally assume the darkest motives. But the timing of F/F to start their buy back programs in March and April at precisely the same time that the Fed is “finished” with its business is no coincidence. It was planned and coordinated months ago. This is just more manipulation. Bernanke understands this and probably had a hand in the timing of the F/F buyback programs.

The fact that the government is continuing to impact mortgage rates was not mentioned in the JH article. In fairness, his piece was directed to just the Federal Reserve's role in the buy ins. But I don’t think we are getting the full story from the WSJ. We are getting what the Fed wants us to hear. The real story is that Washington simply can’t stop interfering in the mortgage market. If D.C. really did stop, we would have a problem. And they know it. 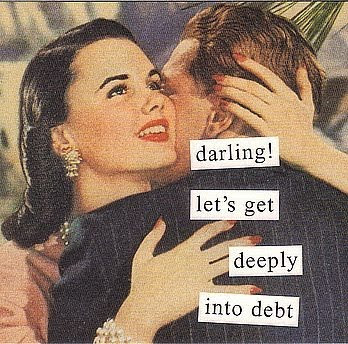