An "In Your Face" Entitlement - FERS

I don’t think there is anyone who looks at the issue of entitlements in the US who is not gravely concerned about the direction we are on. Economists of all stripes, damn near everyone in D.C. and a long list of academics have all highlighted the problems. But the same groups that are raising red flags are misleading us on when and how this problem will affect us.They say/think it is a tomorrow problem. Actually it is hitting us today.

I want to focus on the Federal Employees Retirement System (“FERS”). This is a retirement program for federal workers. The program is similar to Social Security in a number of ways.

-FERS collects money from government workers and their employer.

-The program pays benefits to eligible workers and their families.

-FERS has a trust fund. Currently there is $775b of Special Issue Treasury securities in the fund. This is equivalent to 6% of our total debt and is therefore a very big deal. FERS holds as much of our paper as do the Chinese and the Federal Reserve.

-FERS is running a cash flow deficit. This is a new phenomenon. FERS is converting itself into a defined contribution plan that will address some of the problems. However the cash drain experienced in 2010 will not be reversed in the foreseeable future. It will increase. Some numbers from OMB: 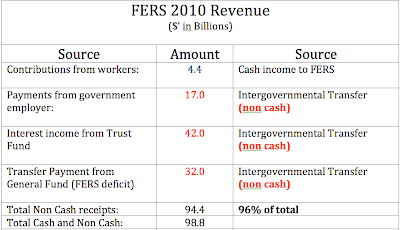 The benefits paid in 2010 will come to $70b. Therefore total revenue exceeds expenses by a tidy $28b. This is the conclusion presented to the public. Clearly there is no problem with FERS. They are running a surplus! I look at it exactly the other way around.

Note: In fiscal 2010 our deficit was $1.3 trillion. Total expenses were $3.4t. Therefore ~40% of all federal expenses were funded by debt. I will use this percentage when adjusting for the FERS impact on our debt profile.

Cash out at FERS was $70b. Cash in was only $4.0b. The difference of ~$66b is the real measure of what is happening at FERS. They are sucking down cash. A substantial portion of the deficit is funded with debt creation.

(A) The $17b of payments by Agencies is a paper transfer from the government agency that is the employer. Treasury turns this script into cash. Treasury has no money as we are running a deficit. The pro rata share that becomes debt is $7b (17*.40). The entire payment is recognized as a current budget expense.

(B) The $42b of interest is a non-cash item. It is just script. Think of it as borrowing from a HELOC. If you don’t pay cash each month they just add it on to the principal. In D.C. they call it the Intergovernmental Account (IG). Interest paid whether in script or cash is a current expense.

(C) The $32b of General Fund transfer is paid by Treasury. Again, Treasury will have to borrow $13b of that (32*.40) from the public to make the cash available to FERS so it can cash the retirement checks. The whole thing hits the budget.

(D) The money from Treasury (17 + 32 = 49b) is still short 17b from the 66b cash deficiency . Where does that come from? Treasury of course. FERS sells $17b of those Special Issue securities it holds back to Treasury. Once again, Treasury has to go to the public market to come up with this entire shortfall. This results in an increase in Debt Held by the Public (“DHBP”) and a decrease in the IG account. But this $17b does not find its way onto the current budget.

I pick on FERS as it is a little known entitlement program. They paid out only $70b last year. Their big sister, Social security will lay out $700b. But in 2010 FERS had a larger impact on DHBP and total debt than SSA. In my book if you’re adding to the debt load you're adding to the problem.

In our big economy FERS won’t sink us. But it is just one piece of the puzzle on entitlements. When you put all of the pieces on the table and study them you would see that all of programs have their lines crossing, FERS is just the first to “cross over” in a big way. Cash is going to be King in the future. All entitlements will be eating cash. The problem is that there is absolutely no way to make them paygo without busting the economy. We are in the first year of a losing battle with entitlements. It will go on for another fifteen years or so. Blame the baby boomers. I expect that is exactly what we will do. 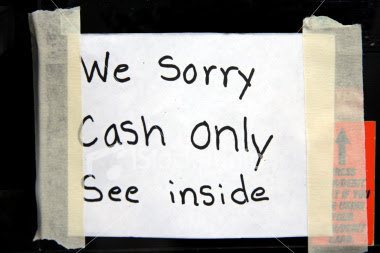