Goldman Sachs Principal Transactions Update: Back With A Vengeance

Just released NYSE data indicate a 50% ramp up by Goldman's principal Program Trading unit. Whereas the prior week saw Goldman trading only 631 million principal shares on the NYSE, the most recent data indicate a massive rise to 977.8 million. Also notable is Credit Suisse's doubling in principal program trades to 586 million from 245 million. Zero Hedge is compiling materials to demonstrate the phenomenal gamble CS is taking by being the largest holder of the ETF-underlying pair trade. The ensuing implosion, once the market loses the invisible futures bid, will likely destroy Switzerland's second biggest bank and likely take down the country with it. Probably most notable is the screaming increase in overall program trading, from 30.7% of all NYSE volume to 40.4%! Virtually every broker saw their Principal PT operations double week over week: seems like everyone is brokering those ETF trades now. Poor SPY and IWM are being mangled 10 ways from Sunday nowadays. 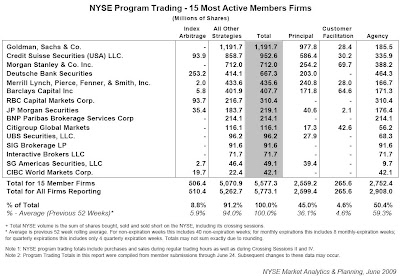