Journalists from across the spectrum have documented the militarization of police forces in the United States, including, CNN, Huffington Post, the Cato Institute, Forbes, the New York Times, Daily Kos, Esquire, The Atlantic, Salon and many others.

Many police departments laugh at and harass Americans who exercise their right to free speech (pro tip for ZH readers - listen to the officer call protesters "Scurrying Cockroaches" at 1:50):

Indeed - especially since police brutality against protesters has been so blatant in recent months, while no top bank executives have been prosecuted - many Americans believe that the police are protecting the bankers whose fraud brought down the economy instead of the American people: MILITARIZATION OF POLICE STARTED IN 1981

Most assume that the militarization of police started after 9/11. Certainly, Dick Cheney initiated Continuity of Government Plans on September 11th that ended America’s constitutional form of government (at least for some undetermined period of time.) On that same day, a national state of emergency was declared … and that state of emergency has continuously been in effect up to today.

But the militarization of police actually started long before 9/11 … in the 1980s.

Radley Balko testified before the House Subcommittee on Crime in 2007:

Militarization [of police forces is] a troubling trend that’s been on the rise in America’s police departments over the last 25 years.

Since the late 1980s, Mr. Chairman, thanks to acts passed by the U.S. Congress, millions of pieces of surplus military equipment have been given to local police departments across the country.

We’re not talking just about computers and office equipment. Military-grade semi-automatic weapons, armored personnel vehicles, tanks, helicopters, airplanes, and all manner of other equipment designed for use on the battlefield is now being used on American streets, against American citizens.

Academic criminologists credit these transfers with the dramatic rise in paramilitary SWAT teams over the last quarter century.

SWAT teams were originally designed to be used in violent, emergency situations like hostage takings, acts of terrorism, or bank robberies. From the late 1960s to the early 1980s, that’s primarily how they were used, and they performed marvelously.

But beginning in the early 1980s, they’ve been increasingly used for routine warrant service in drug cases and other nonviolent crimes. And thanks to the Pentagon transfer programs, there are now a lot more of them.

Former Seattle Police Chief Norm Stamper published an essay arguing that the current epidemic of police brutality is a reflection of the militarization (his word, not mine) of our urban police forces, the result of years of the “war on drugs” and the “war on terror. Stamper was chief of police during the World Trade Organization protests in Seattle in 1999, and is not a voice that can be easily dismissed.

Ever since Ronald Reagan in 1981 helped draw up the Military Cooperation With Law Enforcement Act, quickly passed by a very cooperative congress, effectively circumventing the Posse Comitatus Act of 1878 by codifying military cooperation with law enforcement, the military has been encouraged to give any and all law enforcement agencies unfettered access to all military resources, training and hardware included. The military equipment was designed to be used by American fighting forces in combat with “the enemy,” but since a law was passed in 1994, the Pentagon has been able to donate all surplus war materiel to America’s police departments. The National Journal has compiled a number of statistics showing that in the first three years after the 1994 law came into effect, the “Department of Offense” stocked police departments with 3800 M-16 assault rifles, 2185 M-14’s, 73 grenade launchers, and 112 armored personnel carriers, as well as untold number of bayonets, tanks, helicopters, and even some airplanes. Regardless who will be in power in the future, the militarization of the police will continue. After all, who wants to appear as being soft on crime? These days, a chief of police’s office is like a doctor’s office, but instead of getting swamped with drug salesmen, they have very congenial visits with the merchants of popular oppression, the salesmen of weapons, various chemical agents, Tasers, body armor, and all kinds of tracking software, surveillance gear, and anything else the department may need for crowd control and to infiltrate dissidents, which are no more than US citizens wanting to restore the republic to its rightful place.

Numerous other assaults on our liberty started before 9/11.

After 9/11 the government drew up the Patriot Act within 20 days and it was passed.

The Patriot Act is huge and I remember someone asking a Justice Department official how did they write such a large statute so quickly, and of course the answer was that it has been sitting in the drawers of the Justice Department for the last 20 years waiting for the event where they would pull it out.

The government’s spying on Americans also began before 9/11 (confirmed here and here. And see this). Indeed, Dick Cheney, Donald Rumseld and other government officials who held high positions in the George W. Bush administration pushed for wiretaps without approval by a judge … in the 1970s.

(And because the "temporary" crackdown on civil liberties within America is being justified by the "War on Terror", the fact that that war was planned 20 years ago is arguably relevant. Especially since we are in a perpetual war - see this, this, this and this - and so our liberties will never be restored unless we demand it.)

GOVERNMENT TARGETING GRANDMAS ... INSTEAD OF ACTUALLY WORKING TO REDUCE TERRORISM

The militarization of police forces throughout the United States cannot be taken in a vacuum, but is part of the ongoing drift towards a police state. The government has said for years that American citizens on U.S. soil may be targets in the war on terror, is using anti-terrorism laws to crush dissent.

Indeed, you can be labeled as or suspected of being a terrorist simply for questioning war, protesting anything, asking questions about pollution or about Wall Street shenanigans, supporting Ron Paul, being a libertarian, holding gold, or stocking up on more than 7 days of food. Government agencies such as FEMA are allegedly teaching that the Founding Fathers should be considered terrorists. So perhaps that means that any people who like American values are "terrorist sympathizers".

Instead of doing the things which could actually make us safer, the Bush and Obama administrations have been harassing innocent grandmothers and other patriotic Americans (and doing things which increase the risk of terrorism.). 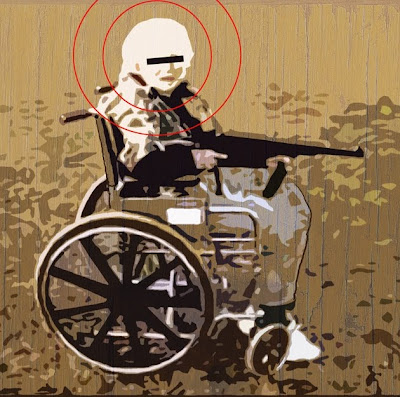 This trend is not just limited to the U.S.